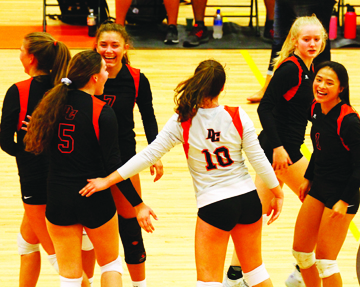 Last year Davie’s varsity volleyball team went 22-3, won its first conference title since 2002 and charged to the third round of the 4-A playoffs. The War Eagles did that even though Kayla Moore, a varsity starter in 2016-17, was sidelined all year with an injury.

“Kayla played really well,” said fifth-year coach Amber Brandon. “It was a huge piece that was missing last year. There were definitely matches and moments where we felt that. She was really the missing piece of the puzzle that we were trying to find. She’s got a really good swing. She understands the game. She probably had as many kills tonight on soft stuff as she did hitting the ball hard.”

“Emma and Elizabeth ran a 6-2,” Brandon said. “That’s the biggest change with us after Lauren ran the team the last four years. They both did a really good job finding their comfort zone. It’s a different offense that we’re all having to adjust to. They did a good job of keeping the other team offbalance and mixing it up between our hitters.”

Another big loss from graduation was libero Morgan Flores. Dakota Hutchins stepped into that void with 18 digs.

“That was another big role for us to fill,” Brandon said. “Dakota really stepped up in a leadership role of talking and making sure she’s running the floor and running our defense.”

Zoey Clark had 11 kills and seven aces. Brandon said “she went on two huge serving runs (in the first and third sets).”

Staring at a 2-0 deficit against visiting Page on Aug. 21, the War Eagles didn’t panic. They stormed to a five-set win. Moore (nine kills) and sophomore Ali Angell (eight kills) were a big part of it.

“Kayla had four huge kills in a row at the end of the fifth set,” Brandon said. “She had two really smart offspeed shots and hit two balls hard.

The War Eagles ran into trouble after taking a 22-18 lead in the first set. Page stole that one 25-22 with seven unanswered points. They suffered a slew of self-inflicted wounds in the second set and lost 25-23.

“It was a huge amount of points that we just gave away,” Brandon said. “We gave them four aces. We gave them 17 points.”

Davie caught fire in the third set. It took the third and fourth sets with ease to knot things at 2-2.

“Our setters (Hayes with 19 assists and Tilley with 11) started making better decisions,” she said. “Page has one of the better middle blockers in the area, and we took advantage when she was on the back row.”

“We had a conversation about these are the three things I told you we had to fix and we haven’t fixed any of them,” she said.

“A lot of our kids and Page’s kids play club ball together,” she said. “I coach a ton of Page’s kids in club ball. So everybody knew what the other side was going to do.”

After Davie went up 15-14, Tilley shut the door with an ace serve.

Notes: The seniors are Clark, Hutchins, Moore, Jessica Crosby and Angel. The juniors are Stakely, Everhardt, Kaylee Krause and Tilley. The sophomores are Loj, Abigail Reynolds and Angell. Hayes is the only freshman on varsity. … Davie has two girls with the same name, with different spelling. There’s sophomore Ali Angel and senior Allie Angel, who returned to volleyball after not playing in 2017-18. JV coach Brittani Steger said: “We call (Angel) Lefthanded Ali. The other one (Angel) is taller, so sometimes we call her Big Al.” Brandon said: “When we go to other gyms and they announce the rosters, they always think it’s a typo because they’re Nos. 7 and 8. If their names were not spelled differently, I don’t know if I could do it.”