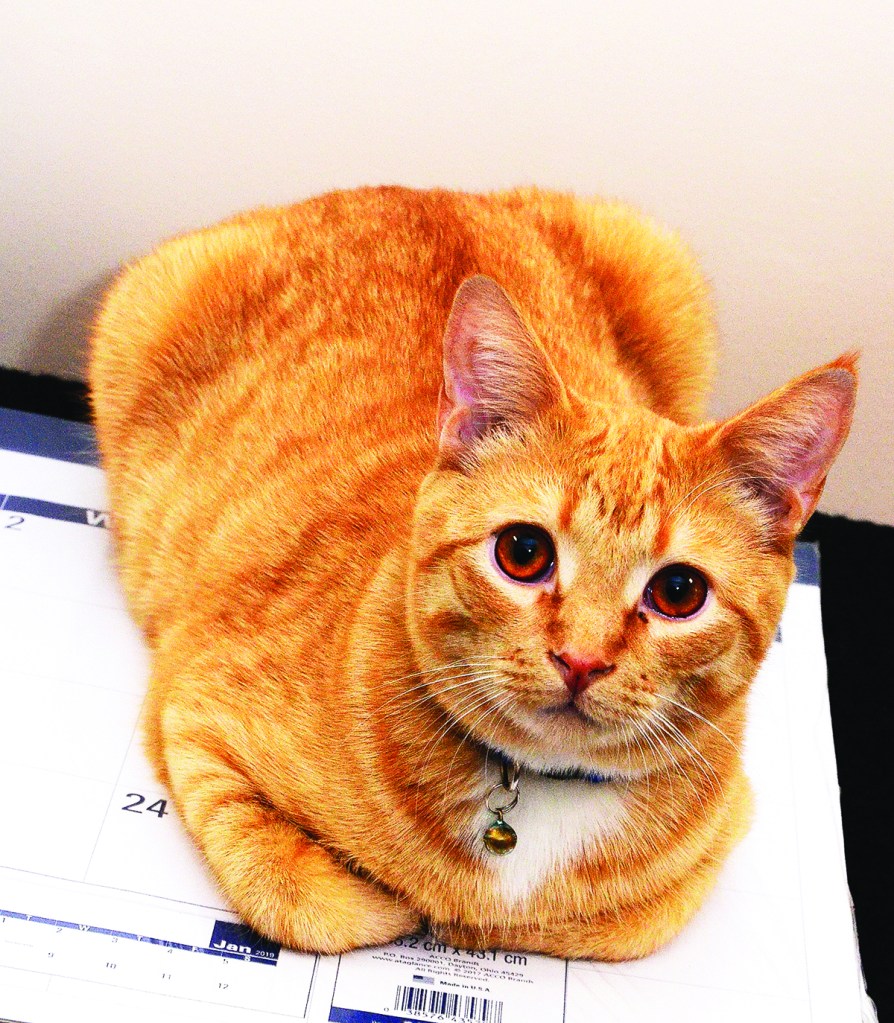 Sarge Butters at his police department home in March.

Sarge Butters was back on Facebook Sunday morning, posing from a bed in his new home.

Still the mascot for the Mocksville Police Department, the cat rescued by officers lived at the department until a couple of weeks ago, when Town Manager Matt Settlemyer made the decision to have him “re-homed” and his police Facebook page removed.

The manager said that the department will have two Facebook pages – one featuring Sarge Butters and another with police news.

Sarge Butters post read: “I’m back on social media. Stay tuned for more pictures and regular updates. Also, check out my friends at their new Mocksville Police Department page for local PD news and useful law enforcement information. Why not follow them MEOW”

The situation came to a head about a week before the town board’s meeting in August, in which some 50 people showed up to support Sarge Butters, filling the meeting room and part of the lobby.

Mayor Will Marklin tried to reassure the audience at the beginning of the meeting, saying that Sarge Butters was being well cared for and updates of his antics are provided to the department staff.

“We express our gratitude for all of the concern about Sarge Buters. He looks forward to continuing his role as mascot of the community,” Marklin said. “While decisions regarding social media and Sarge Butters are made by town management and have not been addressed by the board, the commitment of this agency to protect and serve the citizens of Mocksville remains our first priority, and as always, we will protect the well-being of Sarge Butters.”

The statement was followed by speakers who expressed their disappointment in the decision and the town.

Alan Bagshaw of Mt. Airy managed a Save Sarge Butters Facebook page, and said he was met with silence when trying to find out what had happened to the cat and why.

“Silence is the message the Town of Mocksville has sent to the nation. He (Sarge Butters) was a nationally-known figure.”

That silence led to rumors that led to anger, he said. “We all want what’s best for him,” adding that the town sent the message that an animal is considered property. “The truth will be different from what the statements are,” Bagshaw said.

Susan Whitener said she rarely had a reason to visit the Mocksville Police Department from her Advance home – until Sarge Butters came along. The cat was the most positive thing coming from the department, calling his use “brilliant.” “He softened the look of policing in America.”

Then, without notice, “he was ripped from all of his fans and supporters.” “You all should be ashamed. Every story (about the reasons for his removal) have been different. What were any of you thinking? Look at how you have allowed this debacle to take place.” It exposes the character of the town, she said.

“The cat has been great for the police department. He was a great figure … positive for the police,” said Barry Williams, adding that the whole situation was “uncalled for.” “Jesus Christ, how many people are homeless, elderly who don’t have enough to eat. The cat is taken care of and they aren’t. Why are we arguing over something that’s taken care of? I find all of this really unnecessary.”

Kathy Anderson asked whose name is on the cat’s rabies tag; that would signify the owner. Her concern is that the cat was “taken without notification from the residents who own the cat.” She said calls to the town and mayor didn’t provide much information.

“I don’t understand how professional people could let this go on for so long. It all was very confusing and unprofessional.”

Requests for correspondence from the town manager and board members concerning the cat revealed the names of two board members – Amy Vaughn-Jones and Brent Ward.

Concern was first expressed in early April after a Sarge Butters Facebook page post the day after a couple was hit – one killed – while crossing the street in downtown. That message read:

“Late last evening an incident occurred in the town of Mocksville. A couple was struck by a vehicle, while they were crossing North Main Street. This incident is still under investigation. We want to remind our citizens that warmer weather brings out more pedestrian traffic. Please take caution while driving in areas with high foot traffic and always obey speed limits. We also ask that pedestrians use crosswalks and sidewalks for safety. We will keep the public updated as details about this incident continue to emerge.”

Vaughn-Jones sent Settlemyer an email the next day saying: “The FB post should come down! Many of the folks posting comments talk about how the speed limit is not enforced and they never see anyone being stopped there by the police?”

Settlemyer responded by saying the police department was just trying to keep people safe in downtown, but said they would create a page to separate the PR (Sarge Butters) from press release information that needs to be distributed to the public.

By mid-July, Police Chief Pat Reagan had re-organized the front office to provide what he called a “professional appearance.”

Vaughn-Jones also questioned to Settlemyer the administration of the department, and said the litter box was dangerous because of a pregnant officer, “which could be fatal.” “I love animals but I am concerned for the officers health and that of the unborn child!,” she wrote. “My feeling is that we MUST do a much better job with managing the PD.”

She wrote in another email: “Someone who is speaking and writing for the cat has begun this FB (Facebook) protest! So again I ask who writes for Sgt Butters? Which officer is responsible! And I would not be surprised if there is some health law that prevents the cat in a public work space if they are not a service animal! Who is in charge at the PD? The Cat?”

She asked the manager for job performance reviews on all officers. “My concern again is for the strength of the leadership at the PD. Also, Matt if you don’t mind also reporting to us the number of officers who have left as well for other employment. I would also like to know how many officers are on duty daily and with what responsibilities they have? Have had some complaints the total number of patrolling officers vs. those who sit in the PD daily with other responsibilities! When you have officers leaving then we are not listening to our officers.”

Ward also reported that Sarge Butters was an inappropriate face for the police department, and  once let the manager know “the cat must go.” He also reported inappropriate Facebook posts made by Sarge Butters, one revealing private information of an individual and the other something about Jeffrey Epstein. That post was taken down, and Settlemyer said the person who made the post was disciplined.

Ward wrote: “Matt, as you and I discussed on July 8th one month ago in your office about not only my concern but the concerns of other board members of the structure of the Mocksville Police Department and how it seems to be operating, to this date I personally have seen no improvements or have heard no updates as you assured me you would. Therefore, I am requesting an executive session with the board on Aug. 20 at our next board meeting so the entire board can be updated on the issues of this department, other issues and how we move forward. I see these concerns as urgent.”

That closed session was held on Aug. 20, and board members made no decisions or offered any discussion afterwards. Only personnel discussions are allowed in the closed session as requested.   “Issues” such as whether Sarge Butters should be the face of the department wouldn’t qualify for a closed session.

Board members Rob Taylor and Brian Williams told Settlemyer in emails they did not have problems with the police department or Sarge Butters, and were surprised when the issue came to a head in mid-August. Board member Eric Southern has remained silent on the issue.

Sarge Butters gets a new home