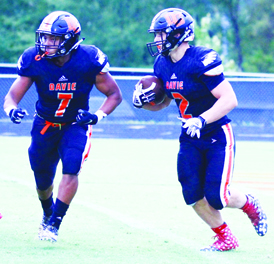 With its fingertips dug into the side of a cliff, Davie’s football team hung on for dear life in the final seconds and beat visiting Page, 28-27, in the season opener Saturday.

The War Eagles had a commanding 28-7 lead with five minutes to go, thanks to 15 points in a span of 2:03. The Pirates, with help from a fumble and a successful onside kick, scored 20 points in a span of 4:21. Davie spent last year stepping on rakes, suffering eight losses for the first time in school history, and a loss here would have been more than deflating.

But safety Caleb Bowling was money in the ultimate climax. After scoring a touchdown with five seconds to go to cut Davie’s lead to 28-27, Page coach Jared Rolfes decided to go for two and the win. Bowling broke up the pass in the end zone and Davie celebrated deliriously the end of a six-game losing streak that began last September at Kannapolis.

Davie coach Tim Devericks said: “It’s unbelievable. It was a great play. We talked a lot in the offseason about mental toughness, battling the roller coaster and being able to respond when things don’t go our way. I was proud of our guys for believing in what we did. The other thing was doing it together.”

Defensive back Kristian Lyons: “Caleb is my boy. I knew he would make that play. So I had faith in him and he followed through.”

This was an upset win that could serve as a springboard. The War Eagles knocked off an opponent that went 9-3 on the field in 2018 (not counting three forfeits) and was 46-11 from 2015-18. It was their first win in the series since 2016. (Last year’s 35-28 decision went down as a Davie win after Page was penalized for using ineligible players, but Page won on the field.)

Devericks: “Page is a great program. They have a huge amount of athletes.”

Talk about making 2018 a distant memory, Davie took the opening kickoff and roared 68 yards for a 7-0 lead. On third-and-8, quarterback Nate Hampton rolled right and went deep to Jack Reynolds, who made a ridiculous 35-yard catch even though he appeared to get hit by the defender before the ball arrived.

Devericks: “It was a scramble play. Jack and Nate are always on the same page in scramble drill, and Jack made a great contested catch.”

On third-and-goal from the 3, Hampton started left on an option play, nothing was there as two defenders had running back Tate Carney shadowed, and Hampton pivoted and scored up the middle. Guillermo “Willie” Moure added the extra point.

Devericks: “They came out in something a little different than we were predicting them to be in because we didn’t exchange film. They had the pitch man covered and Hampton turned it up in there.”

On the Pirates’ third offensive series, they overcame Ben Norman’s sack, converted two third-and-longs and kept the ball for 15 plays. But Davie’s fast and aggressive defense came up with a huge stop. On second-and-goal from the 3, Gage Recktenwald, Zach Smith and Bowling dropped running back Jeiel Melton for a two-yard loss. On fourth-and-goal from the 2, quarterback Javondre Paige handed to a jet-sweeping Melton. Bowling – there’s that name again – was the first to get there. Matthew Hill and Recktenwald finished off Melton for a three-yard loss.

The defense made another stand on Page’s next possession. On a second-down pass, Hill tackled Antoine Shaw, who had 11 catches for 136 yards, at the line of scrimmage. On a third-down pass, Hunter Meacham stopped Tareek Smith a yard short of the stick. On fourth-and-1 from the Davie 20, Paige, who gashed Davie for 147 rushing yards in 2018 but gained two yards on 16 rushing attempts in this one, was met at the line by Smith. No gain.

Devericks: “The defense played outstanding in the first half (in Blaine Nicholson’s debut as defensive coordinator). Zach is a tremendous asset (at rush end). Last year he got some part-time playing time (on offense). But being a full-time defensive player now, his speed and athleticism on the edge is great for our defense.”

It was 7-0 at halftime. On the fourth play of the third quarter, Melton fumbled. Recktenwald, who made his share of big plays, promptly fielded it on one hop and rambled 49 yards to the Page 15.

Davie used the wildcat formation from there. After Carney churned twice to the Page 6, Josh Robinson ran into the end zone to make it 13-0. (A two-point pass from the muddle-huddle formation failed.)

Davie’s defense continued to swarm. Bishop Norman batted down a pass; twin brother Ben buried Melton for no gain; Recktenwald batted away another pass; and Lyons blocked a punt that wound up going six yards.

The defense was clutch yet again on Page’s next series. On third-and-6 from the Davie 10, Trevor Richardson made an open-field tackle to stop Shaw a yard short. On fourth-and-1, Page tried a trick play – a running back lobbing a pass into the end zone to Isaiah Fisher-Smith. Cornerback Justice Redmon got a hand in and ripped it away.

Lyons excelled with 17 tackles and 15 solo stops. Bowling had 15 tackles, Richardson 11, Ben Norman 10, Ivan Poag nine, Recktenwald nine, Hill eight, Meacham eight and Smith seven. Nicholson said Davie managed just eight sacks in 2018; it had eight in the 2019 opener alone. Page finished with 33 rushing yards and had zero points through three quarters, and Ben Norman was a major reason why. He had three sacks and four tackles for loss. Poag, Smith, Meacham, Hill, Darius Leonard and Aidan Payne also had sacks. Recktenwald and Smith both had three tackles for loss, while Hill and Bowling had two apiece.

When Page tried to run between the tackles, nearly 700 pounds of granite was waiting for them (Ben and Bishop Norman weigh 355 and 325, respectively).

Devericks: “Unbelievable turn of events for those two in the offseason, and it showed tonight with their energy and enthusiasm. They believe in what’s going on. On the sideline, they were encouraging and that transfers to the field. They’re two dominant forces inside.”

The defense, though, began to cough and wheeze in the fourth. Page marched 68 yards to get on the board, shaking off a Meacham/Hill sack and shaving the margin to 13-7.

Davie answered back immediately. Ben Norman sacked Paige 10 yards back, a punt only traveled 15 yards and Carney turned in the kind of play that Davie envisioned during preseason. He broke a tackle, outran two DBs and scored a 52-yard TD. Carney tacked on the two-point conversion to make it 21-7.

Devericks: “It was probably the first time we blocked it right all night. They were blitzing and playing zero man, and all we needed was to recognize not to climb on the back side – just block out – and it creased them right down the pipe.”

After Ben Norman’s third sack and Paige’s incompletion on fourth down, it was Robinson’s turn to showcase his explosiveness. He broke two arm tackles and scampered 39 yards to the end zone. With 6:04 left, Davie held the 28-7 lead.

Devericks: “The maturity and teammate concept of those two, playing big roles together and feeding off each other, is tremendous.”

Robinson’s long run was supposed to be the hammer blow. It was not, in large part because Paige carved up Davie for chunk yardage. One play after a Payne sack, CJ Crump made a 61-yard reception. Page scored on the next play.

It didn’t seem to matter when Carney responded with a run that is worthy of any highlight reel. He shook off a would-be tackler five yards deep in the backfield, made a cut and rumbled 27 yards to the Page 11 with only 2:15 to play – only to fumble when he was tackled from behind. Page still had life.

Devericks: “That’s one to put on your highlight, but I don’t know if he wants to because he fumbled at the end. But it was a great run.”

Devericks: “They’ve got a guy back there (Paige) who can make people miss and scramble around. It’s a long time to cover those athletic guys.”

With only 1:20 remaining, all Davie had to do was recover the onside kick. It could not. The kick took two big hops and a Pirate pounced on it at the Davie 39.

Devericks: “It was an in-between hop. We decided to go block and it hit at the right time for their guy.”

It didn’t take long for Page to score its fourth TD of the fourth.  On fourth-and-goal from the 3, Melton leaked out of the backfield and caught it in the middle of the end zone with five seconds left – his only reception of the night. Paige’s fourth TD pass of the fourth negated two clutch plays by Lyons, who buried receiver Shaw for no gain on second down and broke up a pass in the end zone on third down.

Devericks: “His closing speed and the angles he closes with are tremendous.”

Lyons: “I saw the quarterback looking right at the receiver (in the end zone). In my head I was saying, ‘Throw it, throw it because I know I can get that ball.’”

With the score 28-27 and Page lining up for two, Davie needed a hero to prevent a downright awful ending. Bowling was a revelation in his Davie debut. If you didn’t know the junior safety before Saturday, you absolutely do now.

Bowling was an Ellis Jaguar in middle school, but he attended West Forsyth as a freshman. He transferred back home for his sophomore year but wasn’t allowed to participate in athletics.

On the do-or-die two-point play, Paige went to Cortez Wilson (five catches for 76 yards) on a slant. Bowling reached around with his left hand and deflected it to the ground.

Bowling: “Before the play, I said a little prayer. I’ve been praying about this for a long time. I was out for a year and I was ready to come back and make an impact. We were in man-to-man. (Wilson) was running an over route. I stuck with it, I saw the ball coming and I knew it was my turn to make a play.”

Lyons: “I think he used (not getting to play in 2018) in the offseason as motivation to grind and everything. And this year is going to be a big year for both of us.”

Notes: The game was postponed Friday due to lightning. … It was almost deja vu. In the first game at the new school in 2017, Davie was beating Page 14-0 with five minutes left. Then came a train wreck as Page score two TDs in 42 seconds and won 20-14 in overtime. … Page went 2 for 7 on fourth-down tries. … The Pirates hurt themselves with dropped passes and the War Eagles hurt themselves with 12 penalties. … The two returning starters on the offensive line – sophomore left tackle Camden Beck and senior left guard Tanner Batten – had two pancake blocks each. The other OL spots were occupied by center Jared Simpson, right guards Stuie Marshall and Merritt Killian and right tackle Spencer Williams. Payne, who was projected at one time to start at center, is now a full-time d-lineman.