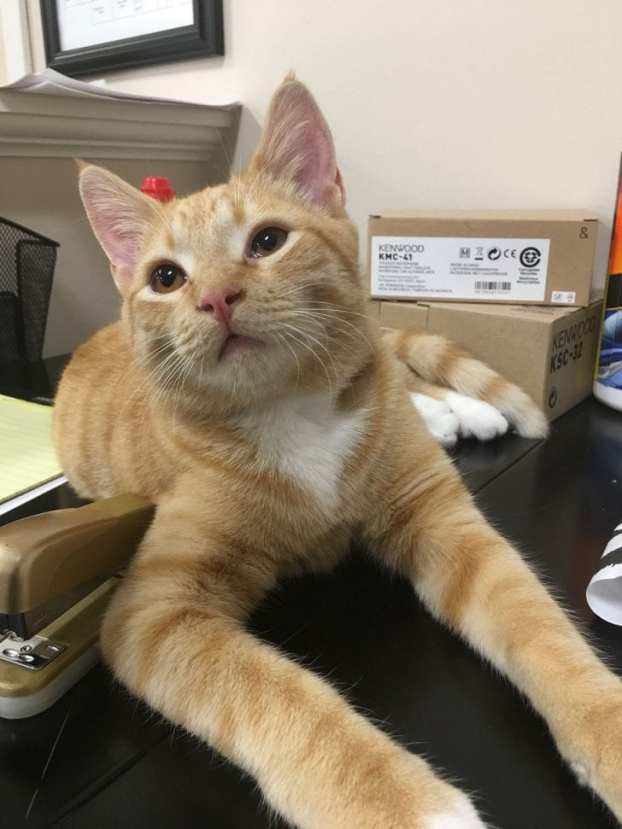 Sarge Butters gets a new home

But he was evicted.

The rescue cat who has called the Mocksville Police Department home for quite some time now has been removed to a more suitable home for a cat, said Town Manager Matt Settlemyer.

The decision was his, and officers at the police department understand, he said.

There are some 25 officers who work at the police department, and Settlemyer said it is a “balancing act” to try to create an atomsphere acceptable to all. A cat on the premises didn’t fit in with his idea of a professional environment.

He said the decision wasn’t based on complaints from officers or town board members, but an administrative decision that was his alone.

It should even be better for the cat to live in a different environment, Settlemyer said.Food, treats and toys were sent to Sarge regularly, and it was difficult to know who may have sneaked him a snack now and then.

His new residence is a loving home where he is wanted, he said.

The town received a barrage of complaints on social media when it was learned that the Sarge Butters’ Facebook page had been removed. Many were expected to voice their disapproval at Tuesday night’s town board meeting.

While removed, Settlemyer said that Sarge Butters will be back on a re-vamped Facebook presence for the police department. He expects two Facebook pages, one with more serious law enforcement issues that people need to know, and the other featuring Sarge Butters with things they want to see.

And while he no longer lives at the department, Sarge Butters is still be the mascot for the police department, on Facebook and at special events.

“Sarge Butters is still the mascot for the Mocksville Police Department,” Settlemyer said. “He will still be visible. Where the cat resides is less important. He will be taken care of in a way to better take care of his needs.”

County commissioners last week approved a step which could move the sheriff’s and health departments to the Boyles Furniture building... read more