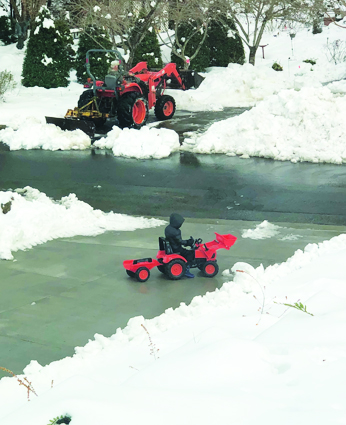 Just like the big boys with their big toys, Brooks McGuire of Bermuda Run helps clear snow from driveways.

It was a snowstorm of historic preportion.

And local weather expert James George says to expect more of the same. He recorded 18.5 inches at his Sheffield home.

“This ain’t going to be the only snow,” he said. “It’s one of several. It’s going to be a stormy, icy winter.”

This early December storm measures up to the 19.5 inches recorded in 1927 and the blizzard of 1936, George said. Unusually wet falls historically lead to wet, stormy winters.

Huge thunderstorms over the Indian Ocean lead to such weather patterns, he said. He says to expect 5-15 days of normal or mild weather, then 10-15 days of colder than usual weather. He predicts mild weather at Christmas, and a bitter cold January.

George said measuring a snowfall is more than putting a ruler in the snow and looking at the height. To get accurate measures, one must use snow boards and measure them every hour. Wet snow also measures differently than a dry snow, and some snow falls and never sticks.

That’s how he came up with the 18.5 inches. He’s no novice, but an official storm tracker. And he ate plenty of snow cream on Sunday.

The snow caused many vehicles to slide off of roads, but Davie Emergency Services Coordinator Brian Byrd said no major issues were reported. About 1,500 people were without electricity at some point on Sunday, and all but 40 had power back on by night time.

“People in Davie County are pretty good about listening and staying put when they’re told to, so that really helped,” he said. “There were not many wrecks, but people who got their cars stuck or slid getting into their driveways, things like that. We were surprised because we were really expecting major issues on the interstate.

“I just really appreciate the way all of our volunteers step up and respond in situations like this,” Byrd said.

An empty home in the William R. Davie community burned Sunday night, but no injuries were reported.

An historic structure, an old barn off Spillman Road in Farmington, buckled under the weight of the snow and collapsed. It was the site of the capture of Morrey Joe Campbell in 1975, North Carolina’s last declared outlaw.