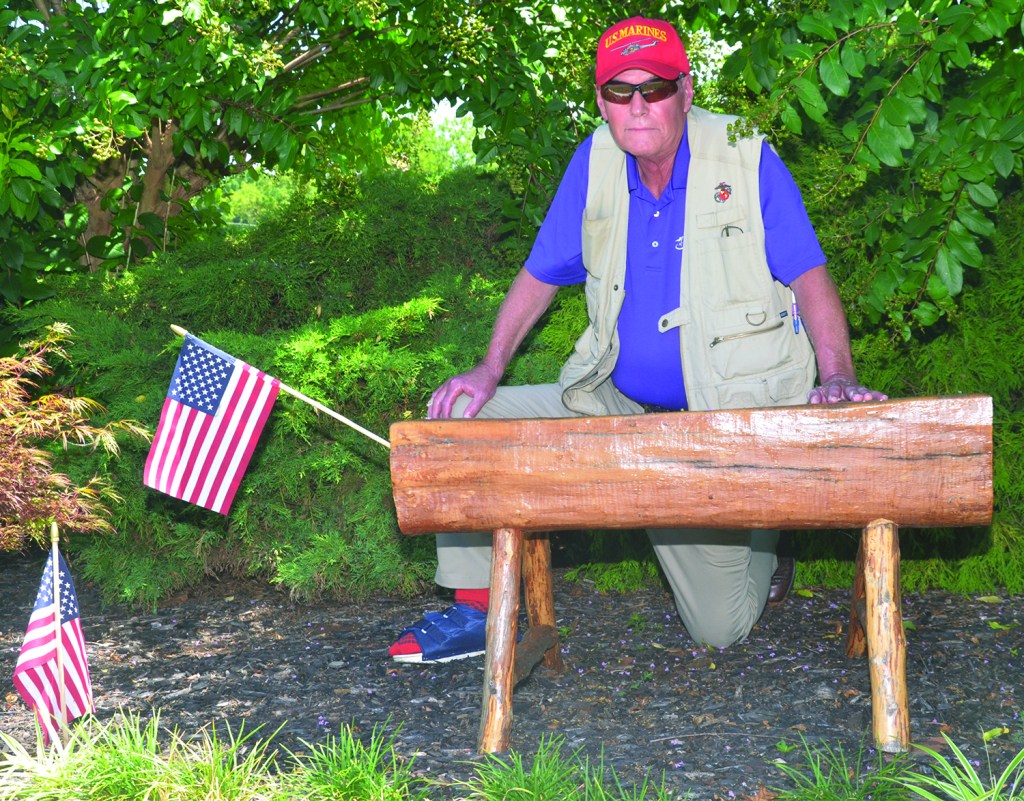 Dean Brunson with the remaining bench at the entrance to Pudding Ridge.

FARMINGTON – It was only a bench.

Think again. It was part of the community.

On June 4, thieves absconded with a bench at the entrance to the Pudding Ridge subdivision on Cornwallis Drive, off of Pudding Ridge Road.

The bench belonged to the homeowner’s association, and was part of an ongoing process to keep the neighborhood looking good.

Dean Brunson built the bench, and is offering a $500 reward for its return and the arrest of the thief.

A U.S. Marine and Vietnam veteran, Brunson has taken it upon himself to make the neighborhood one that will make everyone proud.

Starting with the bench.

When a storm blew through the area, it knocked down trees – including a Bradford pear near the entrance. Brunson made the benches from that tree, and put them at the newly-landscaped entrance for walkers or bicyclists to have a place to rest, and maybe watch the action on the Par 3 No. 2 hole at Pudding Ridge Golf Club.

There’s an American flag flying from a pole (Expect a bigger flag soon.), brick columns and lush vegetation, including a Japanese maple planted in honor of J.D. Rocket.

The area had been abandoned, and he got $1,000 and spent three weeks – while battling an infected big toe, which has since been amputated – trimming the damaged trees and beautifying the entrance.

The entrance, he says, is not only more pleasing to people in the area, it helps sell homes in the neighborhood. At the center of that new neighborhood pride is the Bradford pear trees. And the benches made from one of them.

“My idea was, these things (trees) ain’t going to last forever … and I try to salvage everything. My heart’s broken because I don’t have the matching set,” he said. “To salvage that wood maintains that initial thought of having Bradford pears in the development.”

The thieves took one bench, and damaged the other.

It was taken the night of June 4. Anyone with information can contact Brunson at Deanbrunson926@gmail.com.

Brunson said the neighborhood remains strong. Folks care about their property. And if someone speeds on the dead-end private road, they’ll hear about it. A Neighborhood Watch program is in the works.

There’s a Vietnam War veteran with his eyes wide open. And he’s not afraid to confront you if you do something wrong in his neighborhood.