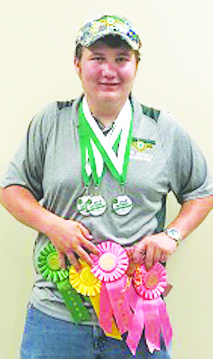 Stephen Walker with his awards from the national 4-H shooting sports championships.

The NC teams are comprised of four members and a coach.

Stephen Walker is now the Individual 4-H Smallbore Pistol National Champion. He placed eighth on the Day 1 slow fire competition, sixth place on Day 2’s silouhette competition and
fourth place on the Day 3 “Camp Perry” vompetition. His consistency allowed him to move into first place overall to win the championship.

The 4-H Club is supported by Tom Cowden Youth Shooting Sports, a non-profit organization tfounded with the sole purpose of promoting positive youth development through youth shooting sports. It hosts the SCTP Team mand works with any youth group that requests services.

Stephen was state champion in 2017 for match archery and air pistol and hunting skills overall in 2018.

Zoe is a three-time state champion in 4-H Shotgun and was a team state shampion for SCTP (Scholastic Clay Target Program) for sporting clays in 2018. She won a silver medal at the 2017 Nationals for hunting skills (Hunter Decision Making).

Other members with state championships include Righteous Cline in 4-H Muzzleloader 2017 and Naomi Hellard for Junior Shotgun in the State Wildlife Tournament 2018.

“We have some great kids who have worked hard to be successful,” Cowden said.

There are 300,000 kids in the United States involved with 4-H Shooting Sports. There were more than 700 kids from 36 states participating in the 4-H National championships in nine disciplines: smallbore rifle, smallbore pistol, air rifle, air pistol, compound archery, recurve archery, shotgun, muzzleloader and hunting skills. The NC team has a full team in all nine disciplines and finished fifth overall in the championships, behind Missouri, Kansas, Oklahoma and Texas. This was the 19th Year of the national championships. Texas has won 16 and Missouri the other three.

“NC is starting to knock on the door,” Cowden said.

Stephen Walker led the pistol team to two second place finishes in silhouettes and “Camp Perry” competitions. He collected two silver team medals, the overall gold and ribbons for his individual finishes throughout the tournament.

“Best of all, we work with some fantastic kids, all of our 4-H and SCTP Kids are second to none for attitude and eagerness to learn,” Cowden said. “We have great kids throughout.”

Anyone interested in joining, no experience or equipment necessary, should contact Davie 4-H Agent Hannah Elmore (336) 753-6100 or at the agricultural Extension agency next to the courthouse or by visiting www.tcyouthshootingsports.org.