In jail for a good cause 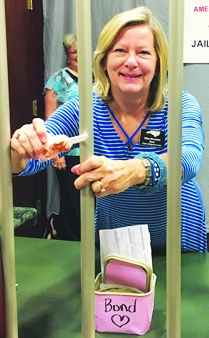 Clerk of Court Ellen Drechsler came prepared for her stint in jail.

The Mocksville branch of Bank of the Ozarks hosted a Jail-a-thon fundraiser for the American Heart Association June 26-27.

The jailbirds raised just over $5,000 from some of Davie County’s finest. All of the bail money supports the American Heart Association.

Warrants were issued for the following:

• Tess from Miller’s restaurant for Loitering at the Beach;

• Tim Wall for Looking Fine for His Age;

• Melissa Hardy from Mocksville Tire and Automotive for Being the Crazy Cat Lady;

• Jerry Prater from Mid Carolina Logistics for Being a Beach Bum;

•Frances Tutterow from Carolina Drilling for Being so Feisty;

• Rachel Troyer from Carefree Rentals for Being Mysteriously Quiet;

• Dottie Graham from Bank of the Ozarks was detained for Resisting Arrest.

• Brent Shoaf, register of deeds, looked the part and took his warrant seriously.

• Clerk of Court Ellen Drechsler got into character and brought her own shiv stuffed in a Little Debbie cake.

• Robin Mason from Crott’s Family Farm was desperate to get out.

The arrestees were all great sports and may be planning some revenge for future jail-a-thons.