Clary, juniors rally in the 7th 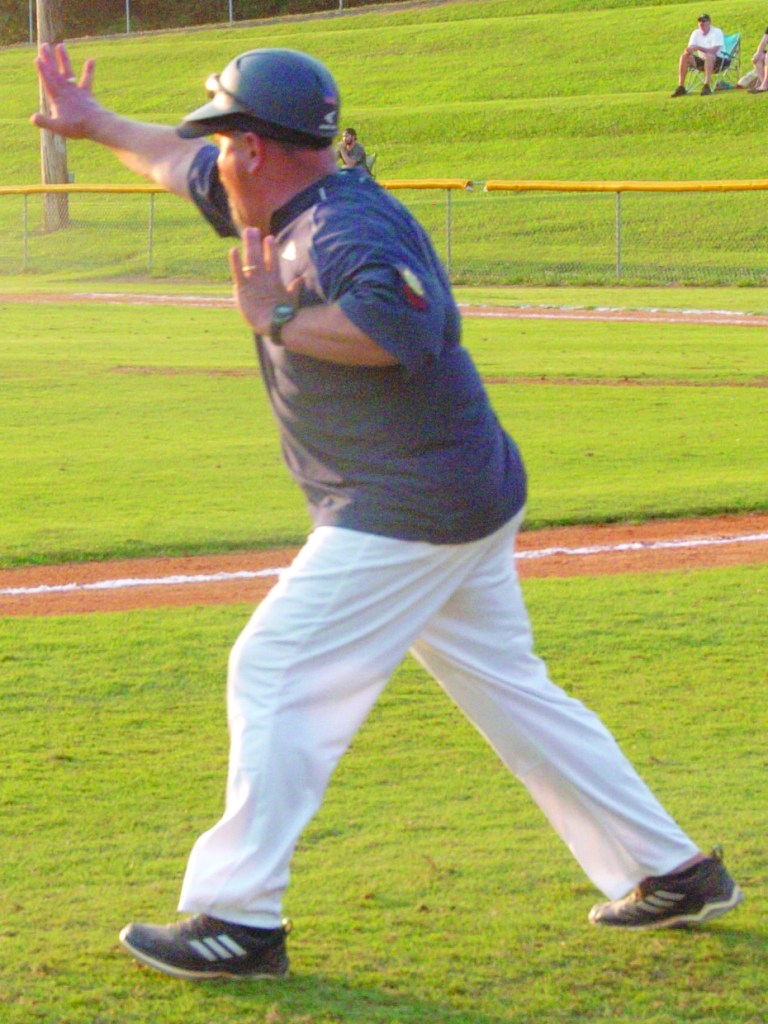 Coach Tim McKnight gives the stop signal to a runner at third.

The previous three games might not have been much to brag about. Mocksville’s Junior Legion baseball team battered three lesser opponents 11-1, 10-2 and 12-2.

But Friday’s 4-3 comeback win at Davidson County was one to savor. First-place Mocksville handed Davidson its second conference loss and ran its records to 9-4 overall and 7-0 in the conference.

“We snatched victory from the jaws of defeat,” coach Tim McKnight said. “We needed a spark and we found it.”

Indeed, Mocksville turned nothing into something after five unimpressive innings.

Davidson exploded for three runs in the bottom of the first behind a walk, two singles, a hit batsman and an error. Mocksville was able to weather the early storm – barely.

With Davidson County stuck on three runs, Mocksville scratched out a run in the sixth to finally get on the board. After Hunter Meacham singled, Josh Westmoreland put runners at the corners with a single. Bailey McKnight came through with a sac fly, a liner to left that plated courtesy-runner Trot Byerly.

“I tried to make something happen,” coach McKnight said. “If the catcher holds on to the ball, Trot is out. But he dropped the ball.”

The move was ineffective. Clary advanced to third on a wild pitch, then scored the tying run on Blake Little’s sac fly to right. DC committed a two-out error on Hunter Meacham’s grounder to second. That kept the inning alive for Joe Johnson, who made the hosts pay with a ground-ball single past the shortstop. Now Mocksville had gone from two down to one up.

Johnson went 3 for 4 for the second night in a row. “Joe was the hot bat again,” McKnight said.

Mocksville hadn’t been sweating many outcomes lately, but Clary’s relief work allowed it to pull out the first one-run game of the season.

Clary, who relieved Johnson in the fourth, faced the top of the order in the seventh. He produced in a big way, getting a strikeout, a flyout to center and popout to second. He didn’t allow a hit in 3.2 innings.

“Troy threw well,” McKnight said. “He threw a runner out at third, he was big on the mound, and he was big at the plate.”