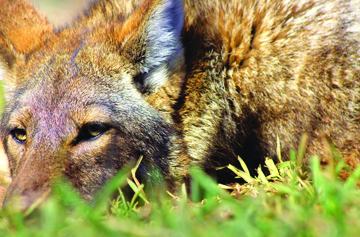 Coyotes aren’t native to this part of the country, and Michael Lanning and Josh Reep have seen first-hand the damage they can do.

Lanning said calves on the family farm were killed, as were four black Angus cows. They also go after native turkeys, deer and other wildlife.

“They kill for fun,” he said. They’re also hungry.

The  owners of Needmore Coyote Control said coyotes have been known to take a bite out of a cow and then move on. Some of those cows had to be put down.

That’s where they came up with the idea of a business to help farmers and other landowners curb the coyote population. They’ll hunt the animals when in season, and can trap them as well. They can get nuisance permits to harvest coyotes out of season, if there is proof of coyote damage to livestock.

The two killed the only confirmed albino coyote in North Carolina. It was taken off Greenhill Road near Mocksville.

Coyotes mate for life, and are very territorial, they said, and are harder to track than deer. The biggest coyote they’ve taken is 52 pounds, most  weigh 30-45 pounds. Litters can include 10 or more pups.

“They are one of the most smartest animals out there,” Reep said. “They’re hard to track.”

Most of their customers are farmers. Some have tried the donkey in the field trick, but they said that is ineffective. It is easier to track and harvest coyotes on land that hasn’t been hunted on recently.

Coyotes, while dangerous, aren’t usually deadly to humans, they said. “People see them … and they’re scared … but there has only been one person killed in the United States by a coyote.”

They’ve never seen a coyote with rabies, but know it’s possible. People sometimes think a coyote has rabies when it attacks a person, but that can just be natural for the animal, they said.

When called, they explain the process to the landowner, look over the terrain and look for tracks. They hunt at night with sophisticated night-vision equipment. Wind, barometric pressure and the lay of the land all play a part in how and where coyotes move around.

While native to North America, coyotes didn’t become common in North Carolina until the mid-1980s. Some migrated here, others were brought in for hunting.