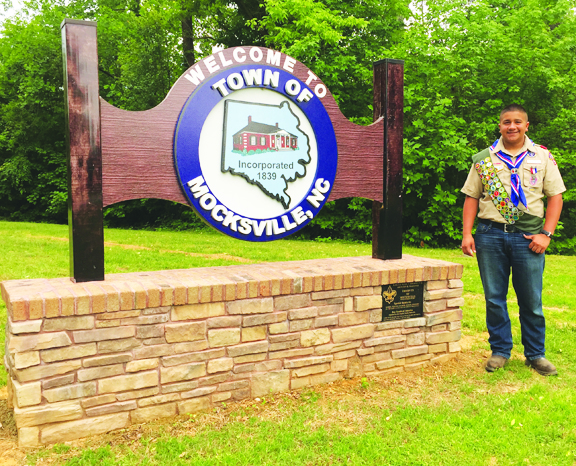 This welcome to Mocksville sign on US 158 is an Eagle Scout project.

On Sunday, Jan. 21, Asuncion “Chonito” Martinez was awarded the highest award given to a Boy Scout – the rank of Eagle.

Son of Chon and Jennifer Martinez of Mocksville, Chonito started in the Cub Scout Pack 574 when he was 6. After earning his Arrow of Light, he joined Boy Scout Troop 575 at the First Baptist Church in Mocksville.

Also at the ceremony, many fond memories were shared about all of the adventures and fun the boys and leaders shared through their scouting years.

In addition to earning his Eagle Scout rank, he had been accepted into the Order of the Arrow, had earned 36 merit badges, earned his Ham Radio Operator’s license, and Scuba Diving certification.

In the summer of 2015, the troop spent a week camping and  horseback riding at the Philmont Scout Ranch in Albuquerque, N.M. One of the merit badges, Aviation, influenced him to join the local Civil Air Patrol Squadron at Sugar Valley Airport and he is active in search and rescue.

“We are very grateful for every one with their help,” he said. “God bless everyone.”