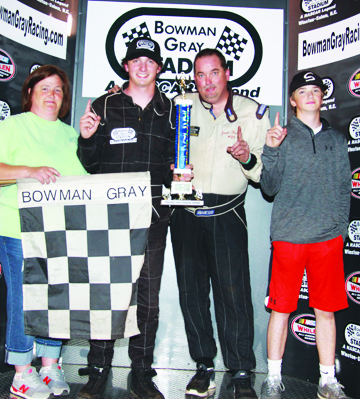 The Keatons, from left: Amanda, Grayson, Jason and Connor.

Wesley Thompson seized the points championship in the Stadium Stock Series at Bowman Gray Stadium in 2017, but Grayson Keaton stole the spotlight in the opening acts of 2018.

If it wasn’t clear that the high school kid was a major talent last year when Keaton finished fifth in the points race, it was after the first two races of ‘18. He took the checkered flag in both.

Keaton introduced himself at The Madhouse as a 15-year-old rookie in 2016, finishing second and fourth among his three races. Last year he produced one victory, 11 top-five finishes and 13 top-10s.

The Stadium Stock division is loaded with Mocksville drivers. After taking first on April 28 and May 5, Keaton finished fourth on May 19. Chris Allison has finished second, fifth and first. Jason Keaton has placed third and eighth. Brad Mickalowski has placed ninth and 13th. A.J. Sanders has placed second, first and 10th. Thompson has placed second and fifth. Braxton McDaniel and Dale Patterson are two more competitors from Mocksville.

“Whenever you race there, it’s chaotic and it’s intense,” Grayson, 17, said during an interview by Chase Vaden that was posted on YouTube. “But if you’re going there to watch, I highly recommend it. It’s the best 10 dollars you’ll ever spend.”

Grayson learned the sport from his father Jason Keaton. The team includes David McClannon, McDaniel and another father/son duo in James Allison and his son Chris Allison.

“It’s been a family thing,” Grayson said. “My grandpaw raced. My dad raced. I watched my dad win a championship. I watched him win races. I liked the way the fans reacted to him, and I want the same reaction. Without him, I wouldn’t know half the stuff I know. I probably wouldn’t even know how to turn a wrench, to be honest with you, without him. He’s taught me a lot about patience and set-ups. James is like an uncle and Chris is like a brother. What my dad can’t tell me, Chris will tell me in a different way and it makes sense.”