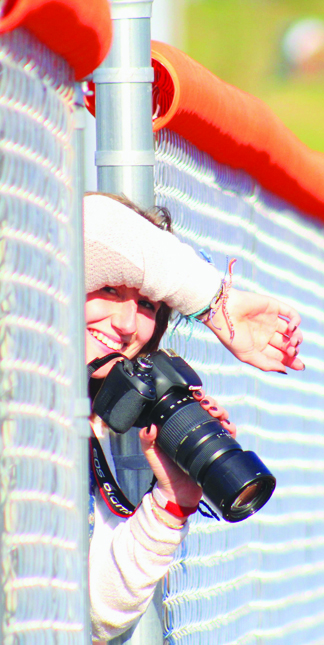 New staffer senior Emily Pender waits during a baseball game for the next play. “I’ve always loved taking pictures. The deadlines were really stressful, and there was a lot of pressure to get everything finished on time, but it was really fun to be a photographer and contribute to the first book at the new school,” said Pender. - Photo by Aubrey McArdell

The 2018 Clarion was inducted into the Gallery of Excellence, a collection of college, high school and middle school yearbooks published by Walsworth and recognized as consistently demonstrating superior quality. Books are chosen yearly based on excellence in theme, coverage, design, photography, and story copy.

Walsworth chose Gallery of Excellence schools based on the quality of the former book and the work in progress on the current school year’s book. The 2017 ‘Home is Where the Heart Is’ book captured the nostalgia of the final days at the high school’s 61-year location. The 2018 Clarion, which closes out its reflection on opening the new high school, will be distributed to Davie High students later this month.

As a Gallery of Excellence publication, Davie’s 2018 yearbook will be distributed by Walsworth as an exemplar yearbook to other school yearbook staffs and advisers nationwide.

“Yearbook representatives share Gallery books with other schools and at workshops as examples and idea-generators. The books are displayed at regional, state and national conventions and workshops,” said Walsworth President Don Walsworth.

Clarion staff members may have their work featured in other Walsworth publications throughout next school year. “We feature the covers, spreads, photos and coverage ideas from these books in Walsworth’s educational materials, such as out Possibilities idea book and Idea File magazine,” said Walsworth.

Clarion adviser Michelle Shue was delighted by the news, but not surprised.

“It’s exciting that the work of my staff will be shared across the country,” said Shue. “This group has worked hard to continually raise the quality of the book, and they deserve such an honor. Other yearbook staffs will take our book back to their schools and use it for examples of great work as they work on their own books. That says a lot about what we are doing here.”

Shue credits years of staff building for their success, but keeps the honor in perspective.

“Davie High has had a long tradition of great books, and this honor will elevate the Clarion to a national scale. This staff, and the other staff members and advisers over the years who helped them grow, worked hard to continually raise the quality of the book,” Shue said. “Ultimately though, we focus on creating a book that our students will love. The awards are great, but it’s our own community that we always work to please first.”

The Clarion has long been recognized on a state level. A two-time Tar Heel Award winner in 2015 and 2016 from the N.C. Scholastic Media Association (NCSMA), the Clarion also won NCSMA Large School Distinction in 2017, and received second place for copy, honorable mention for layout, and honorable mention for coverage. In addition to these overall book awards, the 2017 Clarion staff received 11 individual student awards for copy, layout, photography and captions. Recognitions for the 2018 NCSMA awards will be announced in late June.