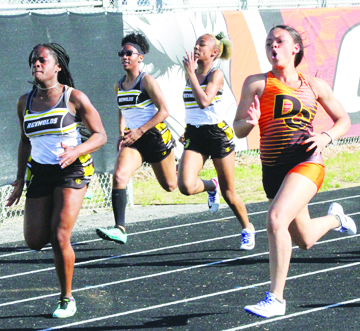 The Davie track team travelled to Spring Valley High in Columbia, S.C., April 13-14 for the 26th-annual Bojangles Classic. The meet is annually one of the most highly anticipated in the nation and this year was no exception. Over 200 schools were represented from 10 states and Washington, D.C. This year’s meet had an international flavor as two schools from Barbados made the trip. Dozens of North Carolina teams competed including several Central Piedmont Conference rivals. At least two U.S. No. 1 marks were achieved as well as many top ten national performances.

Friday the 13th proved to be a lucky day for the War Eagles. Senior Liz Crenshaw posted her fastest 200 meter time of the season and second fastest ever with a mark of 27.65. Crenshaw came back on Saturday morning and also competed in the 100 meter event.

The highlight of the weekend was the performance of the boys’ 4×800 relay Friday night. Their time of 8:20.97 shattered the school record by 14 seconds. Each of the four legs ran personal best times. Junior Trey Raisbeck led off in 2:05, a personal record time by two seconds. Raisbeck handed the baton to freshman Nate Brooks, whose time of 2:13 was a five-second PR. Junior Clay Summers took the handoff from Brooks and flew past a slew of competitors on his way to a time of 2:01.9, a PR of over four seconds. Senior Jared Dequenne ran the anchor leg and charged across the line in 2:00. If Dequenne had run that time in an open 800, it would have been a school record for the 800 meters. Weddington was the overall winner in 7:49, which is No. 1 in N.C. and is currently No. 3 in the US.  The Davie 4×800 relay team currently has the fastest time in the 4-A Midwest Region.

Davie returned to the track Saturday morning. First up was sophomore Emerson Frantz, who competed in a large field in the 3200. Although she has been training exclusively for the shorter 1600 meter event, Frantz came across the finish in 12:42, her second fastest time in that event. Also Saturday morning, junior Erin Cartner competed in the shot put. Coming off  a shoulder injury that has limited her training, Cartner still recorded a distance of over 30 feet  and then came back in the afternoon to compete in the discus.

Sophomore Matt Hill pulled double duty Saturday in the two hurdle events. In the morning, Hill competed in the 110 high hurdles and had a great race underway before clipping the seventh hurdle and being knocked off stride. He ended up about a second off of his previous best time. Hill returned to the track later in the afternoon for the 400 meter intermediate hurdles. The usual high school distance is 300 meters but meet organizers had the competitors run the longer college distance. The Davie sophomore ran the 400 hurdles for the first time and finished in 1:02.51.

Freshman Ivan Poag represented the War Eagles in the horizontal jumps and notched personal best marks in both the triple jump and long jump. In the morning Poag soared 39’5” in the triple jump, a PR by 5 inches. Saturday afternoon Poag returned to the pit for the long jump, where his leap of 19’7 was a new PR by over 16 inches.

As temperatures soared into the 80’s on the sun-drenched stadium track, Raisbeck and Summers returned to action in the mile. Although high school distance runners usually compete in the 1600 meters, this meet featured the full one mile distance, which is nine meters further. The mile was contested in six sections with approximately 150 total entries. Competing in section four, Raisbeck recorded a huge six-second PR in 4:38.72. Summers followed in heat five and sprinted home in fifth place in his section. His time of 4:28.66, when converted to the 1600 meter distance, was a new PR by about .2 seconds from his performance at the indoor state championships in February.  The times for Summers and Raisbeck also rank them No. 1 and No. 4 currently in the 4-A Midwest Region.

Jared Dequenne was next up for the War Eagles Saturday afternoon in the 400 meters. Dequenne blazed home in 50.91 seconds to capture first place in his heat. That time is good for a No. 6 ranking in the region.

The final competitor for Davie was senior Emily Pender, who battled a large field in the 800 meters. Her time of 2:32.14 was a PR by over a second in the open 800, although she has recorded a faster split time in the 4×800 relay. That time is the 15th fastest in the region.

“The Bojangles Classic is one of the premier meets in the country,” coach Rob Raisbeck said. “It is important for us as a program to attend events such as this one. Our goal is to become an elite program. To be the best you have to compete against the best. We took 10 of our best student-athletes to the meet. All of them, without exception, competed hard and are great representatives of Davie County. We came away with one school record and numerous personal records. The meet gave our athletes a firsthand look at the talented competition out there. It also exposed them to college coaches who were either at the meet or who will closely look at the results. And finally, I think it is important to reward our students who work really hard by giving them the opportunity to experience something like this event.”