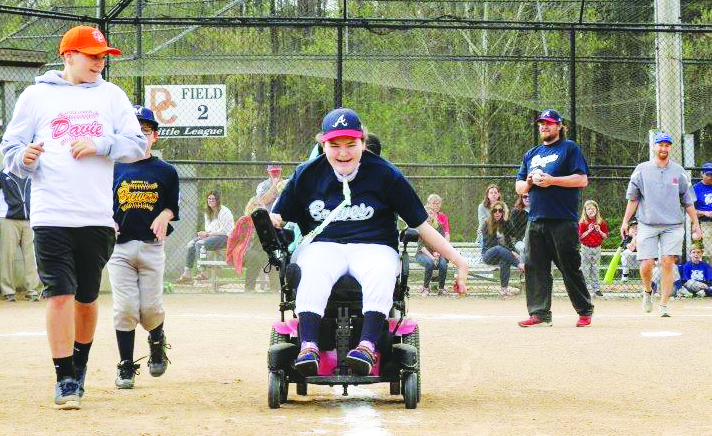 Lila Hunter is encouraged by M.J. Jacobs as she heads down the baseline in the Challenger Division as Davie County Little League kicked off a new season on Saturday.

“I trust in God, I love my country and will respect its laws.  I will play fair and strive to win, but win or lose, I will always do my best”

It was recited 14 times, before each game, within Davie Little League’s 25 teams this past Saturday on opening day (three teams had inter league games).

The morning started off with coaches leading their teams onto Field 3 at the Davie Little League Complex where the opening ceremonies started at 9:30. After opening remarks from DLL’s president Frank Nifong, the microphone was given to LSU Alumnus Ray Wright (LSU 2000 College World Series champion). Upon completion of Wrights’ brief but powerful speech, the season’s first pitches were delivered by 6-year-old Chayton Reid (T-baller battling Leukemia) and 8-year-old Taylor Shenberger (son of late John “Eddie” Shenberger who recently passed after a short battle esophageal cancer).

Dane Porter (DLL’s honorary catcher) caught both pitches. After the introduction of DLL’s Board of Directors the colors were presented by Davie High Schools JROTC color guard. After prayer, the National Anthem was sung, in perfection, by Leah Greene.

The first game of the day was played by Davie’s Challenger division – a division for the mentally and physically handicapped.  Assisting were players from our Junior, Intermediate and Majors Baseball teams.

It was then on to everything from T-ball through Juniors Baseball. Throughout the day one could smell the appetizing aroma of Connie Spillman’s cooking in the concession stand, which stayed slammed all day until close at 5 p.m. The smells and sounds of America’s favorite pastime could be heard all over Little League Drive.

Whether it was the big hit that scored the winning run or the sound of awe when a 10 year old major’s baseball pitcher spots a change-up pitch for a called third strike – it was apparent – Little League Softball and Baseball season is here.

We love what we do here at Davie Little League. The many hours invested since the opening of registration up to now are more than can be counted. But the smiles on our youth’s faces at their first game makes it all worth it.

Here’s to a great season.