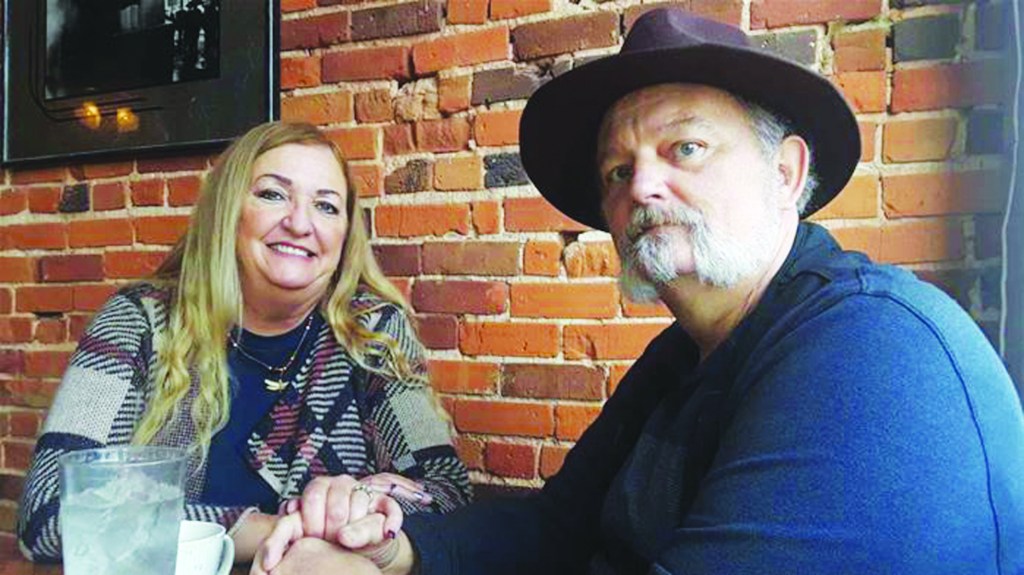 But the big reason the couple are smiling and laughing again these days, they say, is because Joe is back to his old, cut-up self following a life-changing LVAD heart procedure at Novant Health Forsyth Medical Center in November 2017. Before the surgery, the 57-year-old’s condition had deteriorated so much that doctors said he only had a few months to live.

Joe’s spirits were so high the other day not long after his surgery that he even wore his “rock-star suit.” It’s a special suit his wife picked up for him that’s tie-dye colored especially for his surgery follow-up appointment, inspired by them both getting a kick out of his heart surgery team frequently referring to him as their “rock star.”

“I was in a dark place for 15 years,” said Joe, whose condition had deteriorated so much that he had trouble even walking. “Now, I get to shoot baskets with my grandson and watch his ballgames. I get to go to the arts center and look at my granddaughter’s paintings. I get to create things as a craftsman.”

Not long ago, the LVAD (left ventricle assist device) procedure that Joe received was only available at a few scattered academic medical centers. Today, the procedure has become more accessible. A lot of people first heard of LVAD a few years ago when former vice president Dick Cheney received one before his heart transplant.

In some cases, like Cheney’s, the procedure can be a bridge to a later heart transplant surgery. For others, it’s a “destination” therapy and the patient can live with the device for years. Joe said he would like to eventually get his weight down enough to pursue a transplant, which his doctor agreed is a possibility.

“Basically, it’s a propeller-run pump,” said Dr. David Smull, a cardiologist at Novant Health Forsyth Heart & Wellness who is also Miller’s heart doctor. “When you insert one end of this pump into basically the tip of the left side of the heart (the main pumping chamber), this propeller sucks the blood from the heart and it puts it into the main blood vessel of the body, the aorta, and basically does the work of the left side of the heart.”

The device is located inside the heart, but it’s controlled by a controller and batteries that are attached to a harness under his shirt.

“Before his heart failure was so bad that he couldn’t exercise. He was short of breath the whole time,” said Smull. “Now he feels much better that he’s doing so much more.”

Rehab and exercise will also play in important part in Joe’s recovery, he said.

The lure to Mocksville

Joe and Becky met in Indiana, where Becky was a waitress at the restaurant where Joe cooked. She’d been having trouble finding a teaching job right out of college. After working together for a few years, Becky got her first full-time teaching gig at a middle school in Davie County, and they made the big move.

Joe worked in a textile mill after the couple came to North Carolina, learned welding and picked up other handy skills. That’s how he came to repair broken and neglected guitars at a friend’s music shop in Winston-Salem and craft his own copper and turquoise jewelry. But if there’s something that stands out about Joe, it’s his sense of humor.

He laughs now at how right after the surgery he was worn-out and could only muster the words, “I love you.”

“Everybody who worked at the hospital, even if it was someone bringing me a bowl of soup, that’s what I’d tell them: ‘I love you.’”

“I thought it was only me,” Becky said with a smile.

“I still have bad days, but I almost immediately felt better than I’ve felt for 15 years,” Joe said.

Becky said she can only brag on the LVAD team’s care, including that provided by Joe’s surgeon, Dr. Raymond Lee. “They were not just supportive of him, they were supportive of us,” Becky said. “They really kept on top of things.”

A lot has been going on around the Miller home in downtown Mocksville, the couple said. They recently had a daughter and her family move in, in part to help take care of Joe. Not long after, Joe and Becky welcomed a seventh grandchild, who is now, too, living with them. It’s a little bit hectic, but a lot of fun, they said.

Joe said it was also a little overwhelming at first to hear his health options before his procedure but said he couldn’t be happier now that he’s made it this far. “I have to say, after going through everything, there was a lot more good than bad,” he said.

And Becky, for her part, said she’s looking forward to getting out and going fishing with her husband now that she’s retired and Joe is finally feeling like the man who got her hooked on fishing several years ago.

And maybe the grandkids will join them.