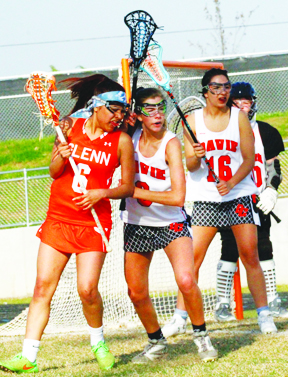 Davie returned from spring break with only one practice day – and it showed.

“We really had a mental letdown after being off for a week as ball control, passing and teamwork were non-existent,” coach Marjorie Foster said. “We had several strong plays resulting in shots with a goal by Sierra Foster and an assist from Paige Riordan, but that was about it. The team forgot their roles and the mission, and practice the following day was intense. Coach K (Laura Kiricoples) and I worked on getting their heads back in the game and preparing for Glenn.”

Davie looked to correct its errors on April 13 against visiting Glenn on Senior Night, and the result was a 12-7 victory.

Davie has just two seniors on its squad. Senior co-captain Jillian Staley was escorted by her mother, April Staley of Advance. Staley has been a varsity starter all three years as a midfielder. She has also was a cross country runner for four years. Staley will continue her education at N.C. State.

Senior Katie Trader was escorted by her parents, Doug and Melissa Trader of Advance. Trader’s first year of lacrosse was her junior year as she learned the game on JV as a midfielder. Starting at wing attack and playing midfielder when needed, Trader has played an instrumental part of the team. She has also been the official scorer for Davie wrestling. She will continue her education at UNC Charlotte.

“Both seniors have been called upon to lead the team in workouts every day at practice, and we have enjoyed them immensely this season,”said Kiricoples.

Against conference rival Glenn, Davie got on the board early with teamwork and assists. Teamwork and ball movement was much improved with four assists from Foster and one from Jessie Crosby in the first half, leading to four goals from Foster and three each from Crosby and Paige Riordan for a 10-1 halftime lead.  Crosby (six) and Foster (two) helped Davie control the draw in the first.

The War Eagles took their foot off the gas in the second, distributing the ball and getting goals from seniors Staley and Foster.

“The second half saw Glenn heavily guarding the seniors as we tried to get the plays to them,” Foster said. “Katie and Jill worked hard and attempted several shots in heavy traffic. Jill worked her way to goal and scored with an assist from Sierra, and Katie had several shots deflected.”

Davie’s points came from junior midfielder Foster with 10 (five goals, five assists), sophomore midfielders Crosby and Riordan with four each (three goals and one assist), and senior midfielder Staley with one goal.

Junior goalie Maggie Junker saved two of three shots in the first half and three of seven for the game.

Davie’s JV fell to West Forsyth, 10-1, on April 1 at home.  Junior Natalie Folsom scored the goal with an assist from sophomore Katie Walton. The JV is 0-5 overall and 0-3 in the conference.