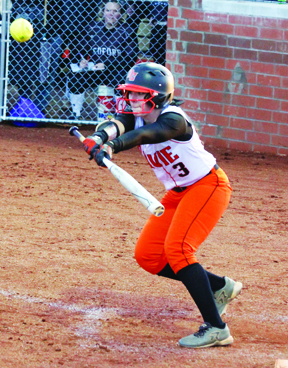 Davie beat a vaunted pitcher from Ledford with one powerful swing (Sierra Ferguson), and Davie varsity softball was a team on the rise.

When Davie hosted Ledford in a nonconference game on March 26, the War Eagles prevailed 2-0 on one hit – a two-run homer by Ferguson.

They beat the Panthers 6-1 on March 17, but junior Sydnee Hilliard didn’t pitch in that one. She was the pitcher last year when Davie needed 10 innings to outlast Ledford 4-2, and everyone knew the March 26 game was going to be a different challenge with Hilliard in the circle. Davie came in hitting .315 with an average of 8.4 runs per game. Hilliard cooled off the Davie bats considerably while walking one and striking out 10 in 72 pitches, 53 of which were strikes.

“(Hilliard) is their ace,” coach Dawn Lowery said. “She was hurt when we played them at Alexander Central (on March 17). It was a totally different game. She is one of the best pitchers we’ve faced and we will face this year. She had a great rise ball that our girls struggled with.”

River Simpson (five innings, no walks) and Rachel Bostic (two hitless innings) were up to the task on Davie’s end. Simpson picked up her second win, while Bostic got a save to go with her three wins. They combined on a four-hitter against a team that is 7-1 in the Central Carolina 2-A Conference.

First baseman Ferguson, shortstop Shea Woody and third baseman Sydney Wyatt came up big defensively in the third. A single was followed by a sac bunt. After Ferguson recorded the out at first, the trio of War Eagles ended up with a double play after the runner ventured too far off second.

“A lot of times the runners will round second and then find the ball,” Lowery said. “It was perfectly executed. It was a really big play. It fired the girls up. We practice it a lot.”

Simpson worked around a one-out double in the fourth. The bottom of the fourth saw Ferguson’s heroic swing. After Hilliard was perfect for 3.2 innings, after she struck out seven of 11 batters, she made the mistake of walking Anna Devereaux.

“Anna did a good job of seeing the ball off her hip and recognizing the rise ball,” Lowery said. “That’s how she got the walk.”

Another mistake, this one proving fatal, was coming. Ferguson fouled off the fifth pitch of the at-bat. Ferguson’s glow-in-the-dark bat rode the sixth pitch over the fence in center field. The two-run blast gave her three homers and 16 RBIs in 10 games. The superstar extended her career record for homers to 17; she’s third in career RBIs. She finished the day with a .441 average, second to Devereaux’s .457.

If Ferguson doesn’t take her deep, Simpson and Bostic would have had zero margin for error because Hilliard retired the next seven batters.

“Sierra struck out the first time looking kind of foolish,” Lowery said. “She knew it and it fired her up. She fouled one off and that’s when I knew she was seeing it better. They messed up and pitched her one where she could get the bat on it. And you know what happens when that’s the case. It was probably a screwball that just didn’t go the way she wanted it to.”

Simpson navigated through a pair of one-out singles in the fifth. The big out was the second one, a liner to Wyatt.

“It was right at her head,” Lowery said. “Had that gone through, they probably would have scored a couple.

“They were starting to hit the ball hard, and that’s why we made the switch (to Bostic). River did a great job. Her changeup was on and when it’s on, she’s really effective.”

Ledford threatened against Bostic in the sixth. With a runner at third and one out, the batter tried to bunt but missed. Catcher Sydney Hendren fired to Woody, who alertly moved over to cover third. Davie got the out on a bang-bang play.

“It was a really big play,” Lowery said.

In the seventh, Ledford had runners at first and second with two outs. Bostic whiffed a pinch-hitter to end the game, securing Davie’s fourth straight win, including a straight shutout win.

The sunny stretch, though, turned dark for Davie over the next two games. In a CPC game at Glenn on March 27, Davie was riding a nice winning streak and the Bobcats had dropped five in a row, including losses of 17-5 to Reagan and 7-0 to East Forsyth in the last two games.

Just when Davie seemed to have it all together, it fell apart in an 11-4 loss. Who saw that coming?

“We just got outplayed on all aspects of the game,” Lowery said.

Davie overcame a 4-2 deficit in the fourth. Emilee Dishman walked, Woody reached base on a bunt and Bridgett Tierney knocked in one with a single. The tying run scored on an Emma Patterson bunt.

But the War Eagles managed just one hit off Brittany Hurd in the fifth, sixth and seventh. Hurd walked one and threw 57 of 84 pitches for strikes. Victory was feasible after five – Glenn had a 5-4 lead – but it wasn’t after the Glenn sixth. It sent 10 batters to the plate and used four hits, two walks and an error to score six runs.

“Our pitching was not where it needed to be, and the top of my lineup struggled,” Lowery said. “I was pleased with Woody and Smith at the plate. They were aggressive and played well.”

Playing for a share of first place at East Forsyth on March 29, the War Eagles held leads of 3-1 and 4-2 before losing 5-4. They watched East score the final three runs, including the clincher on ball four with the bases loaded and two outs in the bottom of the seventh.

East moved to 4-0 in the CPC. West, Reagan and Glenn are 2-2. Davie is fifth at 1-2. It’s a wacky, anything-can-happen race. West beat Reagan 13-0. Reagan beat Glenn 17-5. Against Davie, East committed six of the game’s seven errors but walked away with the win.

“So it’s whoever’s going to show up that day,” Lowery said. “I told the girls it’s not over. We still have a chance to win this whole thing if we come out of spring break playing the ball that we were playing last week. We’re still capable of winning (the regular season), but every night is going to be a dogfight.”

After Carly Knopf limited Davie to two hits through four innings, Davie turned a 1-0 deficit into a 3-1 lead in the fifth. Dishman, Aisulu Ball, Patterson and Devereaux had hits in the rally.

Bostic had a one-hitter for four innings before East clawed within 3-2 in the fifth. Tierney’s two-out hit plated Woody in the sixth, giving Davie the 4-2 lead. In the East sixth, a walk, a single, a two-out single, an error and a bases-loaded walk allowed East to score twice to tie things at 4.

With Devereaux and Ferguson aboard in the Davie seventh, Wyatt belted a pitch. But the line drive went straight to the second baseman, and East had an easy double play.

“Sydney was absolutely stroking the ball,” Lowery said. “We go from first and second with no outs to runner at first with two outs. It was crushing. There was nothing Anna could have done (at second). A foot to the right or left of the second baseman and Anna would have scored.”

In the bottom of the seventh, back-to-back walks loaded the bases with two outs. Another walk sent Davie to 5-7 overall, East to 8-3 and left Davie at 1-3 in one-run games.

“One of the most painful losses (in my career),” Lowery said. “It was a heartbreaker. We’ve got to get better.”