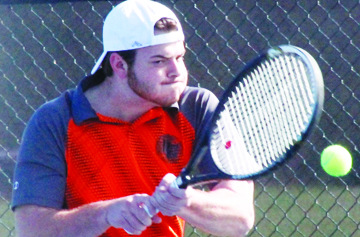 No one could have predicted the Davie-Reagan tennis outcome at Davie on March 26. What the Raiders did to Davie was frightening. They dealt a brutal 9-0 beating.

“Coach Scott Larson has a remarkably good team, and he has a young team,” coach Shane Nixon said. “I never dread playing anyone, but this Reagan team makes you almost dread seeing them on the schedule for the next couple of years. They are that good.”

“We simply didn’t play well,” Nixon said. “In fact, we were so uncharacteristically not us that I was surprised. All I can say is that this one is completely on me. This one is 100-percent coaching. We just weren’t ready to play. Reagan is good, even really good, but they are not 9-0 better than us – at least I don’t think they are. The easy thing to do would be to talk about the injury to Luke (Stillson) and how that not only effects his singles but also a doubles, but that isn’t what has me so upset. We lost a split. We had two additional very close sets and lost both. We double-faulted a ton. My guys are way better than that.”

Two days later, all the Reagan pain went away as Davie blew the doors off visiting Reynolds, 8-1. The margin was greater than it was March 23 (6-3) as second-place Davie improved to 5-1 in the CPC.

“I needed to see this young team respond after a really bad day,” Nixon said. “Tuesday at practice, they responded. It was easily our best practice of the year. In fact, they responded so well I was afraid they might have given me all they had and I was a little anxious about what they might have in the tank for Reynolds. Shame on me. These guys are even tougher than I thought. Beating Reynolds 8-1, now that is more like who we are.”

“You have to start by talking about Chase,” Nixon said. “He is a senior who, quite frankly, has played very little in seeded matches in his career. He has always been a huge part of our team, but usually in intangible ways. With an injury this year, he has stepped up and boy has he played big.

“You also have to talk about another senior, Ben Marklin. Ben played as hard as is possible. He split sets and we like to win those splitters. Ben’s effort today is what every coach looks for.

“At one and two, we seem to have it figured out now. Ben Fleming and Parker are playing some really good tennis.

“And, of course, my fabulous freshmen just did what they’ve done all year. Cren and Jack got wins in singles and then together (in doubles). If this freshman class isn’t the winningest freshman class of all time, I’d wonder who is. And even more good news for them and our team: The third of the freshmen dynamos, Luke (ankle), has been cleared to resume play after spring break.”

With the first matchup going Watauga’s way (5-4 on March 2) when Davie was at full strength and with Stillson missing from the lineup for the rematch, Nixon knew Davie’s chance at Watauga on March 29 was between slim and none. Davie couldn’t overcome those odds, losing 6-3 to fall to 8-3 overall.

“We made a conscious effort to step up in our nonconference scheduling, knowing our conference was a little down at the bottom,” Nixon said. “Watauga is a championship-level team. The top of their lineup is really good. Their No. 1 is a serious Davison recruit for next year, and their No. 2 will be a college recruit when he gets closer to graduation. Playing against them makes us better. The two matches were close. While they got two wins, I feel like with just a slight difference here or there we win either or both.”

“Watching everyone around you come off the court and knowing their scores didn’t go well makes finishing tough,” he said. “That was the case for Parker. He had to win to keep us in it. What a gutty performance by our senior co-captain. He actually got down 4-0 in the third-set tiebreaker, but battled back and got the win. I’m thrilled with Parker’s performance of late.

“Jack played one of the most competitive matches of the day.  It seemed like every game went to deuce, most of them more than once. But true to form so far in his young high school career, all Jack does is win. At 10-1 in singles, he is really far outplaying where his dad/coach thought he’d be.

“Seniors Marklin and Johnston pulled off the upset of the day. Chase has played so well with Luke out that it is hard to imagine where we’d be without his next-man-up ability. Marklin played, by his own admission, really badly in singles. But they came out and set the tone that we were still in the match.”

Davie has all but secured an eighth straight winning season. It’s on the brink of a third straight season with double-figure wins.

“To be at 8-3 at this stage is incredible,” he said. “We lost four of our top seven from last year’s CPC championship team, and we start a sophomore at No. 1 and 3 freshmen in the top six. And we’ve been without one of our top six for nearly three weeks in the heart of our season.”