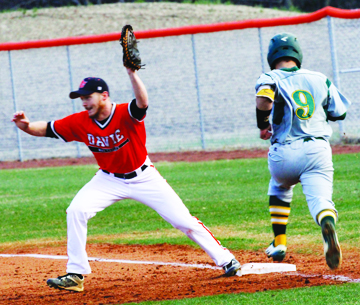 Davie senior first baseman Guy Brunelli takes a throw for an out against West Forsyth.

When Davie’s varsity baseball team met West Forsyth twice last week, the War Eagles alternated the thrill of victory and the agony of defeat, winning 5-0 at home and losing 4-3 in Clemmons.

After taking the first game, the War Eagles were positioned to make hay in the Central Piedmont Conference when they jumped on West 3-0 in the first inning.

But things unraveled in a 4-3 loss. Thus Davie dropped into a four-way tie for second, one game out of first. East Forsyth is 3-1 in the league, followed by Davie, Reynolds, Reagan and Glenn at 2-2. West is 1-3.

“We had a golden chance,” coach Bobby Byerly said. “If we’d taken care of business, we’d have been on top. It’s dog eat dog right now.”

The Titans could not like the image of Carson Whisenhunt walking to the mound for game one against Davie on March 27. The lefty blanked West at Davie in 2017. Last week the junior shut them out, 5-0, for the second year in a row on Davie’s field.

He hurled a complete-game five-hitter with nine strikeouts and three harmless walks. He threw 67 strikes in 104 pitches, picked up his first win in three decisions and lowered his ERA from 3.50 to 2.33. He was perfect for 3.1 innings. He turned in his second complete game in four starts.

It was a reminder of how nasty he can be when his curveball is clicking.

“He was on point,” Byerly said. “When he has a second pitch that he can rely on, he’s pretty potent. Tonight his curveball was on consistently for the first time this year. We could call it at any point in the count.”

Whisenhunt did everything but chalk the field, going 2 for 2 with a walk.

“He had a great at-bat to start an inning,” Byerly said. “He battled, battled and battled. Then he pushed one in the five-six hole that led to a run.”

Davie applied the pressure quickly, scratching in the bottom of the first while getting a spark from Hite Merrifield. Following two walks, Merrifield singled down the third-base line to plate Guy Brunelli.

“That started us off on the right foot,” he said. “We came through with some clutch hits tonight.”

In the second, Hunter Bowles reached on an error to score Cody Smith, and then Landon Bandy’s two-out single provided a 3-0 lead. In the third, Whisenhunt, Merrifield and Aaron Williams put together hits before courtesy-runner Garrett Chandler scored on a passed ball.

West loaded the bases with two outs in the fourth, but Whisenhunt got a guy looking at strike three. In the bottom half, Whisenhunt singled to drive in Bandy to cap the scoring. Whisenhunt put the cherry on top in the seventh, striking out the side.

While Whisenhunt blazed away on the hill, Merrifield (3 for 3), Bandy (2-3) and an error-free defense were equally important to the win.

Offensively, Bandy and Merrifield have improved by leaps and bounds since last year. Bandy – who hit .250 last year in 68 at-bats, which was actually well above Davie’s team average – pushed his senior average to .366 (11-30).

“Landon had another clutch hit that scored a run,” Byerly said. “He hits it where they ain’t. It seems like it’s that way all the time.”

Through will and work – and you can not overstate family genes with his brother Whit anchoring second base and the two hole for the Kansas City Royals – Merrifield has pulled off a 180 turnaround. As a sophomore he had four hits in 39 at-bats. This 3-for-3 performance lifted his team-leading average to .392 (11-28). Whisenhunt was third through March 27 at .333.

“For the first time in a long time, I saw some two-strike, two-out RBI hits,” Byerly said. “Hite has gotten so much stronger. When he came to workouts last fall, I said: ‘Dang.’ He’s a specimen now. He’s filled out. Of course, he works his rear end off at everything. It’s really paid off.”

When Byerly assessed his defense, he pointed to Bandy at third and catcher Cody Hendrix.

“Landon made a great play in the hole that kept them out of (a potential big) inning,” he said. “We’ve got 60 feet from the plate to the backstop, and Cody made some phenomenal blocks behind the plate.

In a home nonconference game on March 28, Davie threw cold water on the hottest team in the Western Piedmont 2-A Conference, belting Forbush 12-3.

The War Eagles collected 13 hits and pitcher Jacob Campbell was a winner in his first varsity start as Davie handed the Falcons just their third loss in 13 games. They are 5-0 in the WPC.

“He threw really well,” Byerly said. “We gave him a little pep talk before the game. He stayed low in the zone.”

Reliever Grayson Keaton was even better, holding Forbush hitless in two innings. His third relief stint kept his ERA at 0.00.

“Grayson probably had his best outing,” he said.

In the second meeting with West in Clemmons on March 29, Davie ambushed the Titans in the top of the first. Brunelli, Bandy, Whisenhunt and Merrifield had hits and Williams contributed an RBI ground out as Davie roared to the 3-0 lead.

But it all came crashing down in the West second, and Davie went on to lose 4-3. Davie failed to get a runner past first from the second through the sixth.

“We couldn’t put anything together after (the first),” Byerly said.

Spencer Nifong (2-2, 1.66) was tremendous his past two outings, but the sophomore did not have his best stuff in this one. That said, all the West runs off him (four) were unearned.

He left three runners standing in a scoreless first. West had three singles and a walk in the second, but take away a two-out error and it’s still 3-0 Davie instead of 3-3. Another two-out error pushed across West’s decisive run in the third, and Nifong departed after throwing 61 pitches in three innings.

“Spencer was off,” Byerly said. “They squared up some balls in the first two innings. He was up a little bit in the zone. We had one of those bad innings that we couldn’t recover from. Uncle Mo turned quickly.”

Davie put the tying run on in the seventh when Smith led off with a line drive to right. Shelton bunted him over, but Davie failed to come up with the clutch hit. Both teams had six hits but Davie (6-5, 2-2) had all three of the game’s errors.

Bandy can seemingly do no wrong these days. He covered three relief innings in 39 pitches, allowing no hits and lowering his ERA to 1.82 to go along with a .342 batting average.

“He was pretty sharp,” Byerly said.