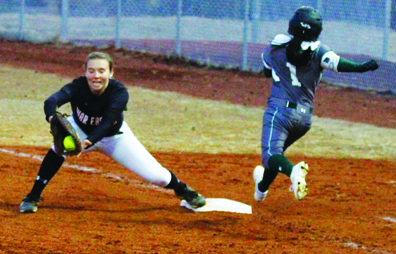 The clouds have parted for Davie’s varsity softball team.

Coach Dawn Lowery knew her War Eagles were better than their 0-4 record on March 8 and their 1-5 mark on March 17. They went out and proved it last week, winning 8-7 over Montour (Pa.) and 11-0 over West Forsyth in the Central Piedmont Conference opener.

The treacherous nonconference schedule is beginning to pay off. Davie is playing infinitely better defense these days (it made nine errors on two occasions), and the prospects for the first regular-season championship since 2001 (it captured the conference tournament last year, but not the regular season) have brightened substantially.

“We’ve been confident at the plate all season,” Lowery said. “I was really happy about our defensive play (against West) because it made us a complete team.”

After Montour chopped Davie’s 8-3 lead to 8-7 in the fourth and fifth innings, Lowery turned to Sydney Smith, and the junior with 1.2 innings and one relief appearance under her belt through seven games came up big as Davie held on 8-7 on March 22.

Smith responded with shutout work for 2.1 innings, walking none and striking out four of eight batters. She hurled 20 strikes in 31 pitches. She earned the save for River Simpson, who went 4.2 innings to pick up her first win of the year.

“Sydney hit her spots really well,” Lowery said. “I’m really proud of her because she works hard. She always asks for extra reps at practice and things like that. She has a really good drop ball. She hadn’t had that pressure on her before, and she did more than what we asked of her.”

This was a breakthrough moment for the War Eagles, who were 0-3 in games decided by one or two runs, losing 10-9 to Forbush, 7-6 in nine innings to West Wilkes and 7-5 to Alexander Central.

In the sixth, with Davie clinging to the 8-7 lead, Smith worked around a leadoff single. In the seventh, she slammed the door with three Ks that negated a one-out single.

“They’re always pretty talented,” Lowery said. “They’re scrappy. They have a good coach. You can tell he knows a lot about the game.”

Shea Woody’s performance at shortstop caught Lowery’s eye. “Shea has really turned it on the last few games,” she said. “She’s playing with a lot more confidence. I’m pretty excited about that.”

It was the season opener for the Spartans.

While the War Eagles have played more than their share of nailbiters, there was never a doubt in the 11-0 dismissal of visiting West Forsyth on March 23.

This figured to be a tight one. West lost 3-2 to Forbush; Davie also lost by one to the Falcons. But then again, this was no typical 3-5 team that Lowery unleashed in the CPC opener. It is averaging eight runs on 10 hits.

Now the pitching and defense are coming around. The Titans had no answer for Rachel Bostic, who pitched a five-inning three-hitter as Davie administered a mercy-rule beating. It was surrendering 8.5 runs per game before Bostic threw 38 strikes in 63 offerings, faced just 21 batters and picked up her third win (out of the team’s four). It was also the first complete game by a Davie arm.

“Rachel did a great job,” Lowery said after Davie improved to 4-5 overall with its third straight win and its fourth in five games. “It was probably the best game she’s ever pitched. She was hitting her spots really well. She was getting ahead in the count. They had a couple hard hits, but we made the defensive plays that maybe we weren’t making earlier in the season.”

Meanwhile, a team that hasn’t been held below five runs continued its offensive feast.

West Forsyth coach Kevin Baity went by the book and intentionally walked Ferguson, who holds Davie records for single-season and career homers. What did Wyatt do as the next batter? She rode the first pitch over the fence for a three-run homer, that’s what.

Any time you’re mentioned in the same sentence as Ferguson, you’re pretty good. Ferguson and Wyatt both have two homers on the season. Both have 14 RBIs. Wyatt has three career homers on varsity. She has socked two of them at West’s expense, including one last year in Clemmons.

“They intentionally walked Sierra, which we kind of knew they were going to do before the game,” Lowery said. “Wyatt’s home run was one of the best hit balls we’ve had all season. She hit it exactly where it was pitched. It gave us a lot of momentum. I talked to Sydney one on one about how to approach it when they walk Sierra, and she has a great mentality for that.”

The floodgates opened in the Davie second. Dishman (triple), Woody (single), Patterson (bunt hit) and Devereaux (single) got a six-run outburst rolling. After Wyatt was hit by a pitch, two runs scored when Sydney Hendren reached on an outfielder’s error. Dishman capped the uprising with her second hit of the inning.

“It was one of the most proud games that I’ve coached in a long time,” Lowery said. “The girls wanted it bad. We’ve had our ups and downs this season, and this was definitely a highlight so far.”

“Woody scooped one up the middle that was hit hard, and she made it look easy (with a throw to first),” she said. “Dishman made a play after it bounced off Sierra’s glove. She finished the play behind (Ferguson and threw to first). Wyatt made plays. She’s getting more and more comfortable at third.”