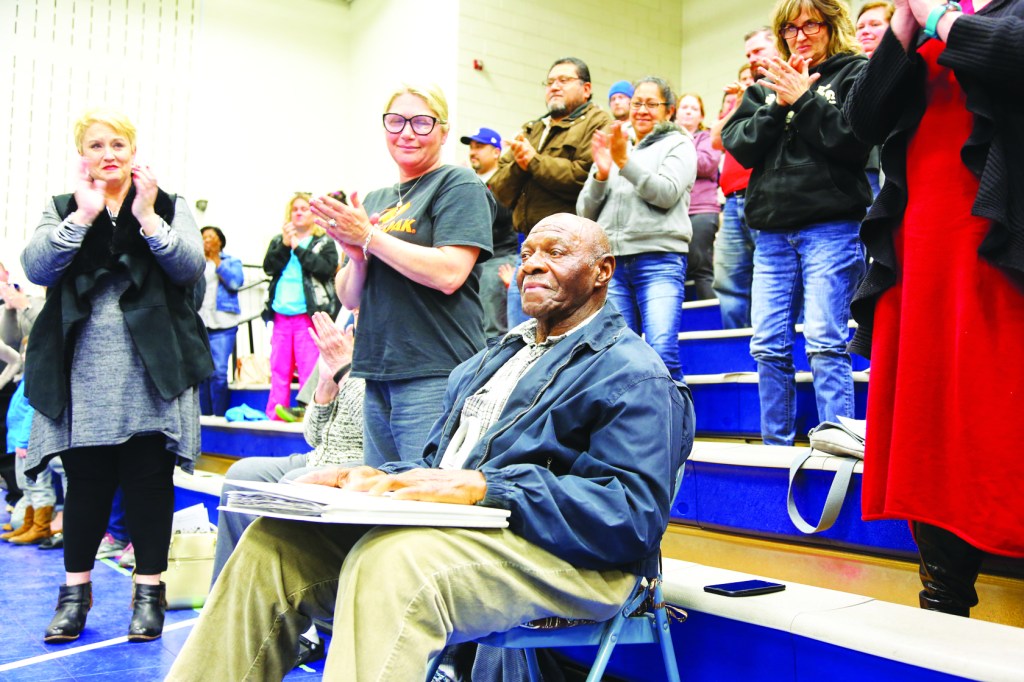 If you count the number of times he has called someone “friend,” it’s safe to say William Ijames has more friends in Davie County than anyone else.

One of those friends decided it was time for Ijames to have his moment in the spotlight, and that moment took place March 22 at Mocksville Elementary School.

Ijames was a custodian at the school for 28 years, starting in the 1970s, but Meredith Harris Wagstaff, who entered kindergarten there in 1985, had no clue what Ijames’ actual job was.

All she remembers is his face.

“It is simply the kindest face you can imagine seeing,” she told the crowd. “Mr. Ijames greeted me every morning with a giant smile, open arms, and an exuberant, genuine, ‘Good morning my friend.’ You heard the words, but more than that, you felt them. It made you feel special, like you mattered.”

Wagstaff, the mom of two children at Mocksville, posted in February on Facebook to let people know Ijames recently had back surgery and was recovering, but was anxious to get back to the school and the children.

Ijames is retired but continues to be a fixture at the school, where he helps in the car rider line, greeting the children of children he has been greeting for decades. Wagstaff organized not only a fundraiser, but also the collection of cards, notes, letters and any other memories of him, which she put into a scrapbook to present to him at the PTO meeting.

Donors generously contributed to the cause, financially and with words of love.

“We love you,” one family wrote. Another said, “Thank you for always being so sweet to the children in the community. To this day whenever I see him, he greets me by name and asks about my grown children.” “You have a special place in my heart,” “He is the kindest person you will ever meet,” and “Every school needs a Mr. Ijames,” wrote others.

Those sentiments were shared at the meeting as Ijames was escorted in and seated on a comfy pillow on a chair, where he listened, with a smile from ear to ear, as Wagstaff shared her memories of him and presented him with the scrapbook, a check for more than $1,300, and a bench with the words “My Friend” engraved on the back.

One woman in the crowd burst into tears and dabbed at her eyes as Wagstaff explained the concept of the bench, a buddy bench, where anyone in need of a buddy can sit and be joined by compassionate others. Wagstaff said the bench, donated anonymously, will be located on one of the school’s playgrounds.

Retired principal Lynn Marrs had the pleasure of spending seven years of her career with Mr. Ijames. She calls him an icon.

“That’s what he is, he’s an icon. I remember in the car rider line, the parents would time their drop-off so he would be the one to open the door so their child could get that special hug and that special ‘My friend.’ There could be six other people standing there to help the children, but the parents wanted Mr. Ijames.

“He is one of the most kind, most humble people I know,” she said, “and you can meet him anywhere and he’s that same person. I wish we could clone him. The children deserve more Mr. Ijames in their lives.”

Still recovering from surgery and dealing with the pain from arthritis in both knees, Ijames, 81, said he hopes when the weather is warmer, he can get back to the car rider line and all his “friends.”

The father of two children, Ijames grew up in Davie County and has been divorced for 50 years. He said when he was the custodian, the principals allowed him to help get the children out of the cars in the mornings.

“Some didn’t want to get out. They’d cry and sometimes their mamas would be crying too, and I’d catch them by the hand, and say, ‘C’mon my friend,’ and that’s where ‘my friend’ came from,” Ijames said.

He said he was surprised at the gifts and the standing ovation he received, and how far the video taken at the meeting has spread. When he was at the hospital in Statesville days after the meeting, people told him they had seen it and how special it was.

Ijames acknowledges he knows his morning greetings and time spent making the children feel special brightened their days, but he said, “They don’t know how they brightened my days.”

\Wagstaff said cards and letters may still be sent to Ijames, in care of Jennifer Swofford, Attn: Ijames, Mocksville Elementary, 295 Cemetery St. She will collect them and deliver them to him.