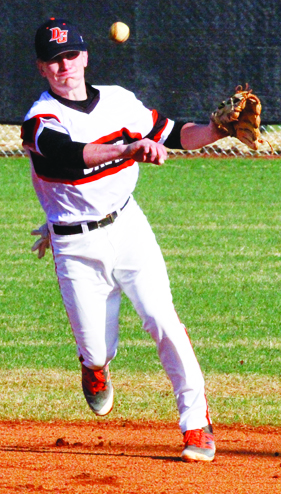 A 3-1 home loss to Reynolds on March 22 was a double bummer for Davie’s varsity baseball team. Not only did Davie flop after winning two straight and three of four, it dropped the Central Piedmont Conference opener.

In the rematch one day later in Winston-Salem, the War Eagles seemed on the verge of getting swept. They avoided disaster with a seventh-inning rally and ultimately prevailed 4-2 in eight innings.

In the first meeting, the War Eagles let opportunities slip through their fingers.

In the first, Landon Bandy singled and Cody Hendrix walked. In the second, Aaron Williams walked, Grayson Keaton was hit by a pitch and Michael Shelton executed a sac bunt to push runners to second and third with one out. In the fourth, Hite Merrifield walked and Williams singled to put runners at the corners with no outs. In the fifth, Hendrix walked and courtesy-runner Jacob Campbell stole second. In the sixth, Merrifield doubled and advanced on a bunt by Williams.

But in those innings (the first, second, fourth, fifth and sixth), Davie came away empty handed each time, and it was 0-0 through six. It was a massive letdown following a 21-4 win over West Rowan that saw Davie rack up 16 hits. In game one against Reynolds, Davie mustered just five hits and fanned nine times “against a guy throwing 68 (mph) maybe,” coach Bobby Byerly said. “We had eight runners in scoring position in the first five innings. We just could not come up with anything. We didn’t square up a ball until the seventh inning. Not one. The bats went dormant after the West Rowan game.”

Carson Whisenhunt pitched superbly for six innings. Shelton and Cody Smith turned a 6-4-3 double play in the first. Hendrix erased a Davie error by throwing out a base stealer in the second “by about 10 feet,” Byerly said. Whisenhunt struck out four straight during one stretch. The junior lefty stranded a runner at second in the fourth. After the Reynolds leadoff man in the fifth reached, he got the second and third outs on strikes. He worked a 1-2-3 sixth.

Whisenhunt finished with a complete-game five-hitter with seven Ks, but he would fall to 0-2 because he got scant support from his offense.

“Carson definitely threw good enough to win,” Byerly said. “But we’ve got to put the dang ball in play.”

It came down to the seventh. Reynolds’ cleanup man walked, which was followed by a one-out single. The Demons played small ball to push in the first two runs. A single made it 3-0.

Bandy doubled with two outs in the Davie seventh. He scored on a Hendrix single, but the next batter struck out.

Davie left wondering about what might have been after losing to Reynolds for the first time in six meetings. The Demons evened their overall record (3-3) and got a measure of revenge for 4-3 and 3-1 losses to Davie in 2017.

The teams played another thriller the next day in Winston. This time the hairbreadth margin went in Davie’s favor, 4-2. But the War Eagles had to dig out of a 2-0, seventh-inning hole to do it.

It was still 2-0 Reynolds through six, and Davie was neck deep in quicksand. “At one time, we had nine straight ground-ball outs,” Byerly bemoaned.

But Davie’s offense came alive just in time. In the seventh, Smith walked and Campbell was hit by a pitch. Bowles bunted. When the bunted ball was thrown away at first, Smith raced home, sliding and barely beating the throw home. A grounder off Guy Brunelli’s bat tied the game at 2.

Davie committed an error in the Reynolds seventh, but Hendrix erased him when he tried to steal second. Hendrix’s arm loomed large when the No. 9 man singled with two outs.

Davie resumed its rally in the eighth, this time with two-out lightning. Williams walked, stole second and scored on Smith’s single up the middle. Campbell walked and scored on a single by Bowles. Davie had the 4-2 lead.

“One of the players of the game was Bowles,” Byerly said. “He performed a slash, hit-and-run to perfection. The shortstop evacuated and he had a perfectly-placed ball in the five-six hole to move runners. In the seventh, he had a perfect bunt and the third baseman threw it away. He made a great diving catch (in center field).”

Spencer Nifong, a sophomore lefty, was terrific on the mound. He went the distance in 102 pitches, retired eight in a row at one point and delivered his second complete game in three starts. His six-hitter made him 2-1 with a 1.94 ERA. He has 17 Ks against two walks on the year.