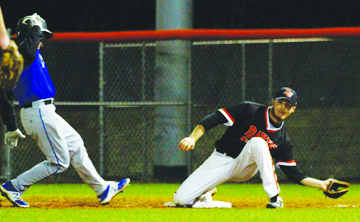 Senior Guy Brunelli reaches for a throw at first during a game against Lake Norman.

After Davie opened with losses to Carson (5-2) and Alexander Central (4-2), Bandy’s complete-game five-hitter in a 4-2 win at South Iredell on March 5 was exactly what the doctor ordered.

Bandy’s night couldn’t have started any worse; he allowed a leadoff homer on his fourth pitch. The Vikings walked and doubled while pushing the margin to 2-0 in the second.

“(South’s first batter) kills three squirrels up in that tree and you’re thinking: ‘Oh gosh, here we go,’” coach Bobby Byerly said. “Landon walked off the field and I pulled one of those Bull Durham moves. I said: ‘He just missed that one, didn’t he?’”

But Bandy was masterful from the third through the seventh, allowing two runners past first base and finishing with two walks and eight strikeouts. Seventy of his 103 pitches were strikes. He fired first-pitch strikes to 20 of 28 batters. Not bad for a guy who last year he worked 8.1 innings and had no decisions in five relief appearances. What an outing in his first varsity start on the mound.

“What a gem he threw,” Byerly said. “It was unbelievable. It’s one of the best thrown games that we’ve had in a long time. He was all over the plate. Every pitch was working. He kept them offstride. His breaking stuff was making his fastball look 90. And he got stronger as the game went on. He knew he was going to have to step up on the bump.”

Leadoff man Guy Brunelli was a major factor in the win, going 2 for 2 with two runs, two walks and a double. Bandy even helped himself with two hits in the two hole.

In the third, Brunelli and Bandy had back-to-back singles before Cody Hendrix plated Davie’s first run with a ground out. Davie tied the game at 2 on Carson Whisenhunt’s grounder.

In the fourth, Aaron Williams singled and advanced on a sac bunt by Michael Shelton. Courtesy-runner Jacob Campbell scored on a wild pitch, giving Davie a 3-2 lead.

Brunelli sparked the insurance run in the fifth, walking, moving up on a grounder and scoring on an error.

“That ball has got to look like a beach ball coming into Brunelli right now,” Byerly said. “He is squaring everything up, hitting it to every part of the field. He’s in the zone right now.”

Whisenhunt (1-4) and Williams (1-2, walk) had the other two hits for Davie. Even though Hite Merrifield was 0 for 2 with a walk, he made his presence felt with one swing.

“Hite may have hit the hardest ball I’ve seen hit in 10 years,” Byerly said. “He hit a rocket up the middle. It didn’t get four feet off the ground, but it was hit directly to the feet of the center fielder. He caught it off his shoestrings. A foot or two over, it would have been to the wall. And if it had any lift on it, it would have been a 400-foot shot. You could hear everybody gasp. He has squared up quite a few lately, too.”

Two nights later, Lake Norman treated Davie the way a bona fide state-championship contender should treat a team that is hitting below .200.

With ballyhooed Justin Jarvis on the hill, Davie was the ultimate underdog in the first game on its new field. Davie, which lost 12-0 in five innings, faced a heralded pitcher for the second time in the young season (Carson’s Owen White was the other). Like White, Jarvis is projected to be a first-round pick in the June draft. He attracted scouts from the Yankees, Nationals, Mets, Royals, Cardinals, Braves and Diamondbacks.

Jarvis went four innings, throwing 54 of 75 pitches for strikes. He gave up three hits (Brunelli, Merrifield and Garrett Chandler had them), fanned eight and threw 15 first-pitch strikes to 19 batters.

“Jarvis was filthy,” Byerly said. “I think the gun had him 92 to 94. And it was 38 degrees with the wind blowing about 30 miles an hour out. Yep, he was impressive. His breaking ball popped off the table.”

Davie actually had two chances to nick Jarvis before the Wildcats dealt the thumping loss. Davie loaded the bases in the first and third, both times with less than two outs. It came away empty both times.

“Good pitchers bear down with runners in scoring position, and he definitely was one of those,” Byerly said. “He had that extra gear when he needed it.”

Chandler’s hit was a triple. Bandy and Whisenhunt both drew two walks. While Davie watched the Wildcats collect 10 hits off two arms, Davie’s average dipped to .177. It allowed the most runs in 58 games (13-7 loss to Lake Norman in 2015), and it was the worst loss in four years (13-0 to Alexander Central in 2014).

The War Eagles seemingly faced long odds against visiting Southeast Guilford on March 9. They came in averaging four hits and two runs. They were facing the third-ranked team in 3-A. They were 1-3. And they had a sophomore on the hill.

But Nifong was undaunted. Davie’s offense was opportunistic and the lefty made a robust opponent look inept as Davie won 6-1 to improve to 2-3.

You know the old baseball adage that you can’t hit what you can’t see. With Nifong, the Falcons could see what they couldn’t hit – and that had to be exasperating.

“He had his knuckle-curve working and kept them offstride,” Byerly said after Nifong tossed a complete-game three-hitter with no walks and nine strikeouts. The only run was unearned. “What a game. Spencer was ridiculous. He had command of all three of his pitches. He had those guys spinning like a top. Some of those really good hitters, he made them look silly.”

In his first varsity appearance against Carson, Nifong lasted three innings. In this one, he had 58 strikes in 79 pitches, faced six over the minimum, recorded three 1-2-3 innings and dropped his ERA from 7 to 2.10.

After striking out two in the seventh, he has 12 Ks against zero walks in 10 innings. Holy mackerel.

“He’s the Greg Swindell of our pitching staff,” he said. “Swindell threw 79 miles an hour and was the (national player of the year) his senior year in college (at Texas in 1985). We’ve got a bunch of great kids, but Spencer just wants it.”

Davie struck early. Hendrix walked with two outs in the first and stole second. After Merrifield got a free pass, Williams plated both with a double to left.

“We needed a clutch hit with two outs and Aaron came through,” he said. “He’s going to be a good one. He’s another sophomore, but it seems like nothing fazes him. He has no facial expressions no matter what’s going on.”

Davie put the game away in a four-run fourth. Williams and Grayson Keaton reached on errors before Shelton singled. Southeast committed its third and fourth errors of the inning to help Davie’s cause.

The War Eagles had more RBIs (six) in this one that they had in the previous four games combined (five). Even more amazing: Nifong and his team tamed an opponent that was 3-0 after wins over East Forsyth (7-1), Asheboro (5-0) and Reagan (3-0).

Notes: Brunelli, Bandy, Hendrix, Williams and Shelton had one hit each. … Hendrix is a weapon behind the plate, with opponents only stealing one base in five games. “The only successful steal was when our shortstop dropped the ball,” Byerly said.