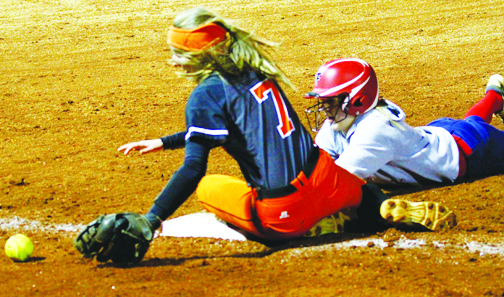 The ball gets away as junior second baseman Sydney Wyatt gets dirty covering first base.

Davie’s varsity softball team made a resounding comeback and almost – almost! – knocked off a 2-A giant in the season opener and the first game on its new field on March 2.

“There were some things we can be proud of,” coach Dawn Lowery said. “We were very scrappy. We didn’t quit. We could have easily rolled over in the second inning.”

The Falcons rocked Davie 7-1 in 2016 and 10-0 in 2017, and Davie had horror flashbacks when the visitors put up a six-spot in the second, when the No. 9 batter hit a grand slam. That was followed by a two-run homer.

In the third, Anna Devereaux injected energy with a two-run triple that helped Davie rally from 6-1 to 6-4.

“We said: ‘Fight back one run at a time,’” Lowery said. “And that’s what we did. Anna has been hot (counting scrimmages and this game). She hit a rope to right-center. The one time she got out, she hit it hard. She always puts the ball in play.”

Aisulu Ball and Bridgett Tierney scored as Davie climbed within 7-6 in the fifth. The thriller was tied at 7 after Sydney Wyatt and Ball delivered singles in the sixth.

“We put ourselves in position to win the game,” Lowery said. “It just didn’t go our way.”

Rachel Bostic, who worked five innings in relief, retired the first two batters in the seventh and had two strikes on the third batter of the inning. Davie had the momentum … until the Falcon homered to break the tie. An error kept the inning alive, and then Forbush’s eighth-place batter launched the team’s fourth long ball of the night. Now it was 10-7 Forbush.

Undeterred, Davie delivered more haymakers in the bottom of the seventh. Devereaux singled and Sierra Ferguson singled on the first pitch she saw. Two outs later, Wyatt came through with a two-run hit that made it 10-9. The classic slugfest, though, ended with the next batter.

Though Davie outhit Forbush 11-9, it hurt itself with five errors to Forbush’s three.

“Sierra was strong at the plate,” Lowery said. “They threw her some offspeed stuff and kept the ball away from her for the most part. She adjusted in terms of where she was standing in the batter’s box. She’s going to have to be patient this year.

“Emilee had a nice triple. Emma beat out two bunts. She’s got a lot of speed. Wyatt came through for us. She does whatever she can to help the team.”

The War Eagles lost to Forbush for the fourth straight time. They also started 0-1 for the first time since a 10-2 loss to North Stokes in 2012. But they were one play from flipping the script against one of the best teams they’ll see during the regular season. (To put the comeback in perspective, last year only North Davidson and Mooresville scored as many as five runs against the 19-3 Falcons.)

“There were a lot of bright spots,” she said. “I was proud of the girls because we don’t historically play well against Forbush. Even our team last year got run-ruled by them. The girls seemed to block that out and played hard. They were really excited to be on their field for the first time.”