Piedmont Opry coming back to Farmington 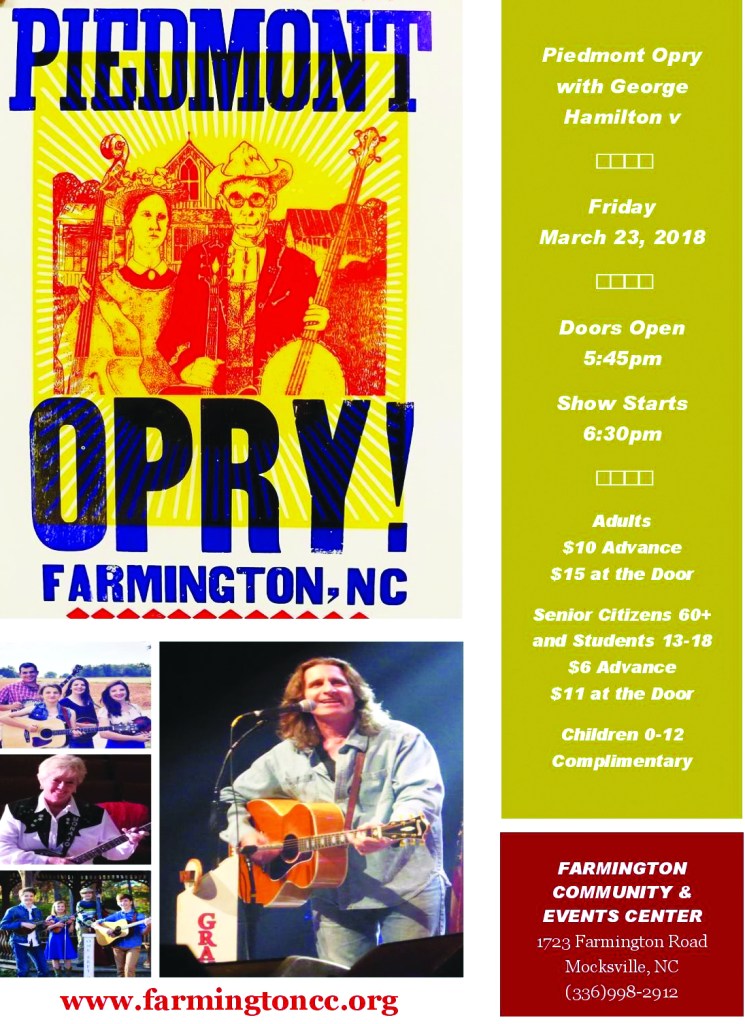 FARMINGTON – The Piedmont Opry returns to Farmington as Americana, bluegrass and traditional country singers and musicians make their way to Farmington Community & Events Center on Friday, March 23 as George Hamilton V brings the event back.

Hamilton is a 30-year veteran of the Grand Ole Opry and has traveled around the world, as a solo artist, and with his father, Winston-Salem native and Grand Ole Opry Legend, George Hamilton IV.

The Piedmont Opry is a fusion of local artists, great music, comedy and good clean fun for the family.  Hamilton’s goal is “for each Piedmont Opry to feature talented locals from in and around Farmington, and to introduce regional and sometimes national touring Americana, bluegrass, country and roots music artists and bands.”

Farmington Community & Events Center is the perfect home for the Piedmont Opry, as the old schoolhouse provides the nostalgic setting for a show that brings in the best of the Piedmont and Mountain music of North Carolina. The center just completed a yearlong rehab of the property. The director and board are excited to welcome visitors to the treasure of these “National Historic Places” designated buildings.

The inaugural Opry sold out quickly and the March show includes some of the same great artists as well as some award-winning newcomers.

The Jones Sisters Band  from Linwood performs a musical blend featuring bluegrass gospel with a Celtic flair, a hint of old country, and an emphasis on sibling harmonies. The band packs a tremendous amount of talent in a younger band, as band members range in age from 12-19.

Another young band of 11-15 year olds will perform, as well. One Fret Over from Salisbury & Kernersville is a group of award-winning musicians.  The band has won ribbons at several fiddle conventions, including a first place in youth band at the 2017 Alleghany Fiddler Convention and second place in Youth Band at the 2017 Old Fiddlers Convention in Galax, Va.

General admission tickets are available at the center or online at the website, adults $10 in advance/$15 at the door; seniors and students  $6 in advance/$11 at the door. Children 12 and under are admitted free with a ticketed parent.

Food and refreshments will be available for sale. Doors open at 5:45 and show begins at 6:30.