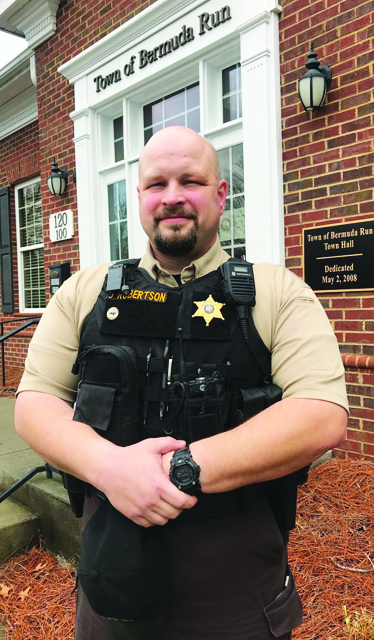 BERMUDA RUN – If the folks in Bermuda Run thought they were getting a community officer like the bumbling Barney Fife, they were badly mistaken.

As Davie County Sheriff J.D. Hartman stated, “Jason Robertson is definitely not Barney Fife. He’s a competent, level-headed professional and extremely good at his job. All the comments I hear from the citizens and governing folks are very complimentary of how well this is working out.”

Robertson, 40, is an 18-year veteran in law enforcement who has been with the Davie County Sheriff’s Office for nearly two years and was the choice last November to fill the new position of a fully equipped and trained law enforcement officer for 40 hours a week. It goes above and beyond what the county offers in terms of overall coverage – with an emphasis on having a presence in the community, talking with the residents and visiting the local businesses.

That’s exactly what Robertson has done in his time on the job.

“On a typical day I’m patrolling the different communities, making sure nobody strange or suspicious is hanging around, getting to know the people and going to all the businesses,” he said. “Many of them, like the banks and pharmacies, know me on a first-name basis. I purposely keep a schedule where no one can figure out when I’m coming or where I’ll be.

“And I do some traffic surveillance. I’ve been addressing a speeding and stop sign problem in the Kinderton area and handing out mainly warning citations. I’m hoping if I can get them to stop at the stop signs and slow them down enough, maybe it will be safer for the kids this summer. And I’ve been sitting on 158 a lot trying to slow people down. There was a lieutenant there today running radar, but nobody was speeding. Hopefully, all of this is helping.”

After serving 16 years on the police force in Salisbury and becoming a lieutenant before he came to Davie County a couple of years ago, Robertson said he was apparently considered for the new position in Bermuda Run before he even learned about it.

“I believe that one of the lieutenants that works here had brought my name up when the position was talked about by the sheriff, and he was kind enough to consider me for this,” Robertson said. “He actually asked me if I wanted to do this. Of course, I prayed about it first, as you should with everything. I talked to my dad about it and came to the decision of saying yes.”

Hartman said the term of  “community officer” or “community policing” is nothing new, but it basically boils down to designing the particular system to meet the needs of a particular community.

“For Bermuda Run, in my talks with the board and town manager, I wanted to design an officer who could be there that citizens and businesses could talk to that would help them solve problems, and he can feed that knowledge to me if he is aware of a problem,” Hartman said. “It also gets us, as a sheriff’s office, closer to the community – folks who would never call 911 or the sheriff’s office and report an issue they’re having, but if you have a community officer that they get to know, they will talk to that community officer and ask for help. It’s a win-win for the community and the sheriff’s office.”

It’s exactly the kind of arrangement Bermuda Run was looking for in the agreement, which came with a price tag of $76,220 for 2017-18 and was a pact between the sheriff’s office and the town – not including the county commissioners.

The town was seeking enhanced law enforcement services in response to comprehensive plan studies showing safety being a top priority.

“We need to make sure we are thinking about how to provide the best safety and security for our people,” councilman Rick Cross said in the meeting when the position was approved. “The community police officer has to get to know the people in the town. This is not just a sheriff’s deputy that drives around. They have to engage people and get to know the residents and the businesses.”

For this position, Hartman liked Robertson’s temperament and his experience on patrol and as a lieutenant with the Salisbury Police Department.

“He’s been a supervisor of patrol, so he knows how the law enforcement side works and has the demeanor and personality to work well with the citizens in the community,” Hartman said. “He is an actual law enforcement officer so he can perform any of those functions of the position, which includes writing tickets, arrests and investigations. But he has a thought process that fits that dynamic of being a community officer in how do we help folks solve problems besides just arresting people or answering calls like a general patrol officer.”

What does Robertson like most about his new job?

“It’s the people,” he said. “They’ve all been very appreciative of me coming up here, and I appreciate them – getting out and talking with them. One of the things I’ve really enjoyed as I’m riding around is seeing people out walking their dogs, and that gives me an opportunity to talk to them. I actually love dogs. I will get out and pet one if they let me. It gives me a chance to meet people rather than going and knocking on their doors and bothering them.

“And I’ve gotten to know people in a lot of the businesses. I get to talking with them and getting in there and cutting up a lot. I went into BB&T the other day, and they were waiting on people, buy they still took time to say, ‘Hey Jason, how are you doing?’ ”

Robertson, who earned his associate’s degree in criminal justice from Rowan-Cabarrus Community College, has been married for 19 years and has two sons, ages 12 and 7, along with a black Lab.

He has primarily lived in North Carolina, but with his father being a preacher, he moved around a good bit when he was younger. His dad has served as pastor of North Main Baptist Church in Salisbury for 23 years where Jason is on the Deacon board.

Robertson readily admits that the hand of God was clearly evident in his move from Salisbury to Davie County and Bermuda Run.

“It’s a bit of a long story,” he said, “but to sum it up this way, there was no doubt in my my mind that God was leading me in this position.”

And he has a gained a greater appreciation for the community he serves.

“I’ve always been impressed with the area itself,” he said. “It’s a nice higher-end community. I always liked to ride around and look at the houses and I guess, for lack of a better word, see how the other half lives. Since I’ve been over here and since I’ve gotten to know these people, the idea of them being the other half is not true. These are really great people here.”

By Jeanna B. White When Rachel Somerville found out she had been placed at Mocksville Elementary for her student teaching... read more