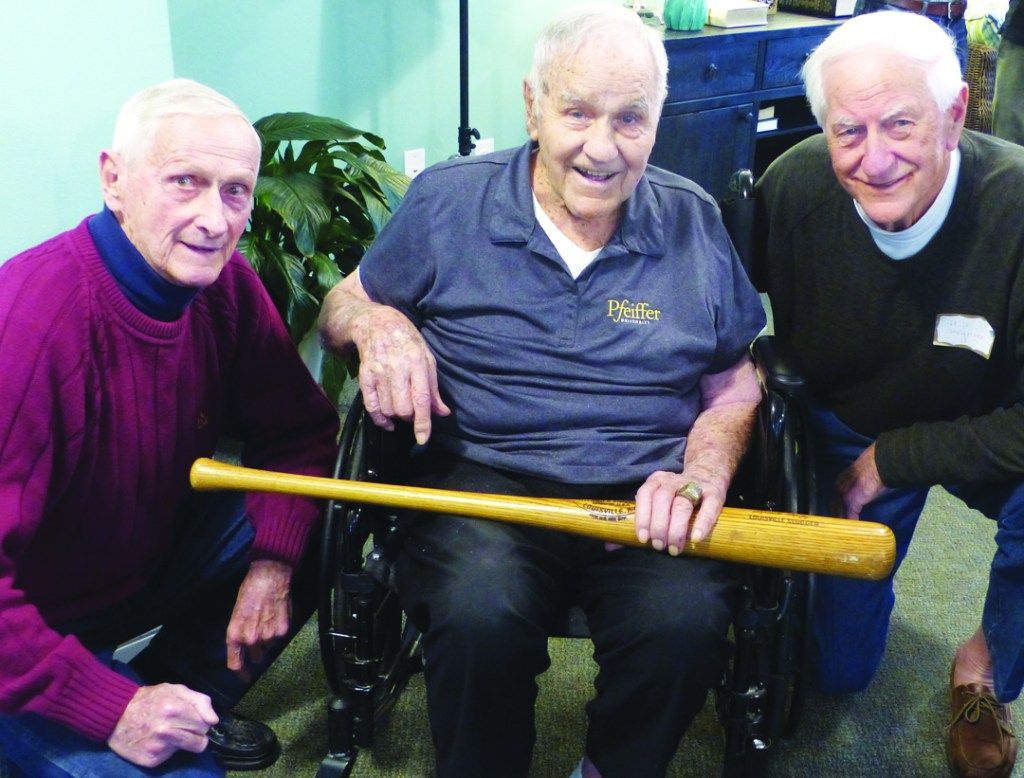 A resident of Spring Arbor Assisted Living in Albemarle, the beloved coach was treated to a birthday celebration on Feb. 17 with some of his best players in his 31 years at Pfeiffer University including a major leaguer, Bill Wynne, who pitched for the New York Mets, Chicago White Sox, and California Angels.

A native of Mocksville,  Ferebee began his coaching career in 1947 at Salisbury High School after service in the U.S. Navy during World War II. In 1955, he coached Salisbury to the state 3A championship. The same year, his Salisbury-Rowan American Legion team won the state crown, finishing third in the national playoffs. Ferebee led them to three North Carolina state titles, four second place finishes, and 15 area championships.

In 1969 and 1971, Ferebee received the Governor’s Award for his contributions to youth baseball; in 1988 hae was honored by the Raleigh Hot Stove League. Including 13 years as a professional baseball scout, Ferebee spent a total of 41 years in the game of baseball.

Ferebee holds two state achievements. First, as the winningest baseball coach in North Carolina history with 1,438 victories. He coached Pfeiffer’s baseball program from 1956-1987, winning 677 games, and an additional 694 with American Legion teams. While at Pfeiffer, he led the Falcons to 10 conference championships and five NAIA District crowns; in 1968, Pfeiffer’s baseball team was ranked number two in the nation.

Over the course of his career, he coached 42 Pfeiffer ball players to professional contracts.

Bob Gulledge, class of 1968, spearheaded the annual gathering of the athletes with their former coach.

“The older I got, the smarter he got,” the Camden, S.C., resident said. “He positively impacted the lives of hundreds of boys and young men from the late ‘40s to the ‘90s

Tommy Eaton of Salisbury, who played for Ferebee in high school, legion ball, and college, acknowledged his beloved coach’s longevity. “He’s in better shape than any of his players.”

Wynne of Jacksonville, Fla., former pitcher for the New York Mets, Chicago White Sox, and California Angels, said: “We have been doing this since he was 90.”

All praised their former coach for his mild mannered approach to the game.

Griggy Porter of Matthews, class of 1969, played for the Chicago Cubs. He stated: “He was a great man to play for. He knows so much about the game of baseball. Thanks to him I got to play professionally.”

In 2005, nine of the players took Ferebee to Cooperstown, N.Y., to visit the Baseball Hall of Fame. As their small group toured the facility, the coach would elaborate on  the lives of those immortalized in bronze. Soon spectators gathered to hear Coach’s narratives.

“He knew more than anyone there,” Gulledge said.

During the birthday celebration,  Ferebee was presented a baseball signed by all the players in attendance.

Gulledge summarized the event. “Says a lot about the man for guys to attend his birthday party up to nearly 60 years from when they played for him.”

Hatley is a free-lance writer and graduate of the Pfeiffer Class of 1979.