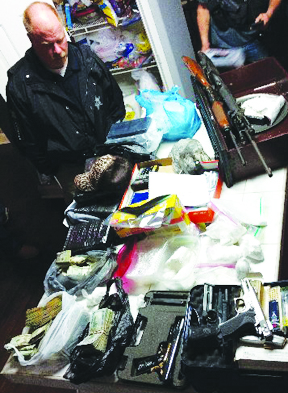 Chief Deputy Chris Shuskey inspects some of the drugs, guns and cash seized in the raid on an Advance home.

A raid on an Advance home last week included the seizure of what may be the largest cocaine bust in the county and the arrest of a Mexican man, who is being held  in the Davie Detention Center in lieu of a $1 million bond.

At the residence, officers found 44 pounds of cocaine, two pounds of crystal amphetamine, 109 grams of heroin, six firearms (one reported stolen from Walnut Cove), more than $50,000 in cash, and numerous scales and items used to package drugs for sale.

“A seizure of this size will not only have an effect on the availability of narcotics in Davie County, but surrounding communities as well,” said Davie Sheriff J.D. Hartman. He estimated the street value of the drugs at $2.1 million.

An immigration hold was placed on Gonzalo, and he should be tried here and jailed if convicted before deportation proceedings, Hartman said.

Raids were also conducted at residences in Southern Pines, Sanford, Aberdeen and Charlotte in the investigation that began about a year ago, led by the Southern Pines police department.

“This criminal activity was associated with a continuing gang-related criminal enterprise and conspiracy,” according to a news release from the Southern Pines police department.

Lee Marvin Harris Jr., 32, of Aberdeen, was called a “prominent member” of the Dope Boys Clique or DBC, an organized street gang. He and his father were also arrested in the raids, as were four others, and a warrant issued for another.

“This investigation shows again how the Davie County Sheriff’s Office works with and shares information with other partner agencies and federal partners to slow the drug trade in our county,” Hartman said. “The sheriff’s office will continue to work quietly and efficiently to serve and protect Davie County.”