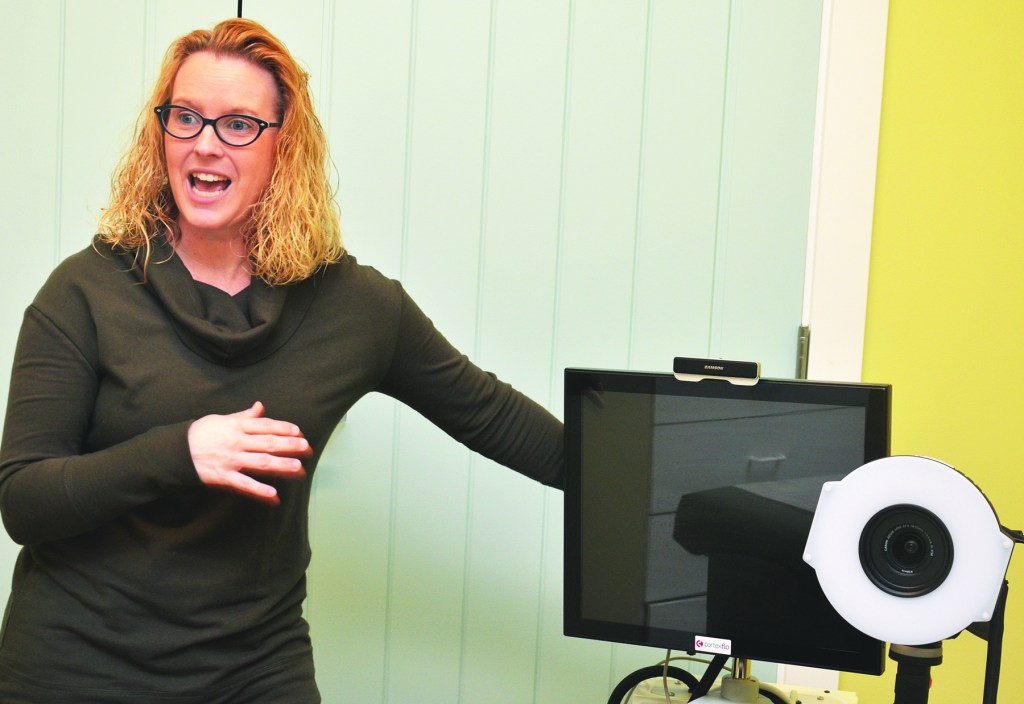 Brandi Reagan shows some of the state-of-the-art equipment used to lessen trauma to children.

In 2009, Brandi Reagan realized there was a need for young victims of abuse to have a place dedicated to helping them through the entire process of recovering from their trauma.

Adults were being served by the domestic violence office where Reagan worked, but she envisioned a place where child victims might receive the same services.

She presented the idea to others, including Rob Taylor, assistant district attorney, who had experience with children’s advocacy centers. Taylor seemed warm to the idea, but Reagan could tell he wasn’t sure how far it would go.

That might have been the last time he underestimated a woman whose spirit animal is a sloth, but who has the energy of a gazelle.

Just one year later, the Dragonfly House Children’s Advocacy Center, funded by grants written by Reagan in her spare time, opened its doors. Located in an historic home, with its share of quirky spaces and cranky climates, more than 200 children were served the first year, and in the years that followed, the number continued to grow. So did the number of employees, the need for more parking, and the need for spaces that were more welcoming and more geared to the special needs inherent in that type of program.

A facilities committee was formed and went to find land, which serves Davie and Davidson counties.

In December 2015, Gary and Joyce Prillaman donated land off Valley Road with the stipulation they weren’t allowed “to sit on it,” and a deadline given for construction plans. Reagan, executive director, and others quickly went to work, and the first phase began a month after the land deal was closed. Construction began last June. The official completion date of the new 6,500 square foot facility was Jan. 12.

The vision was to provide a comfortable, private, child-focused facility that made victims feel safe to talk about what happened to them. From the foyer to the outermost reaches of the building, it’s safe to say that vision was realized.

With a nature theme, soft colors and textures, an abundance of dragonflies (the symbol of change), and rooms designed and built for the needs of those who are served, the staff will be better able to help those who need it most.

“We wanted the children who were seen here to feel comforted on what is probably the worst day of their lives,” Reagan said.

The building houses two forensic interview rooms, one geared toward young children and one toward adolescents and teens. In their former space, the observation room, where officers and others were able to watch interviews take place, was so small it was standing room only. The new large observation room features state-of-the-art technology, a large table, plenty of seating and chairs designed to fit around all the gear worn by police officers.

The medical suite allows staff physician Dr. Amy Suttle to conduct extensive medical histories and a physical exam that uses a non-invasive device, The Cortexflo photo system, to take photos of injuries from sexual abuse for use in criminal proceedings. Suttle actually tested the device and offered input used in construction of devices that are used in advocacy centers around the world. Reagan said the system allows Suttle to examine areas up close without having to touch the victim.

There are also therapy rooms that feel like living rooms, with artwork, rugs, lamps and soft places to sit and feel at ease, a room large enough for group therapy, and entrances designed for privacy.

One of the hallways features artwork by eighth graders at Oak Grove Middle School in Davidson County, who took on the project after a community educator from the Dragonfly House talked to them about the services offered.

The downstairs ohas offices, and an area for community education, something that was lacking in the last location. The large room can seat as few as 10 or as many as 26, big enough for the 15 board members and for other community group meetings or educational purposes. It features tables that can be easily be broken down, barn style doors, abundant storage, and a break room.

“Hopefully, when the staff come in, they feel a sense of calmness,” said Wanda Cox, board members and design committee chair. Cox facilitated the donation of around $95,000 worth of goods and furnishings.

More than 300 individuals were served by the Dragonfly House in 2016-17, and the number continues to grow each year. Since the inception of the program in 2010, nearly 3,000 individuals have been served.

While the program is funded through federal and state grants, as well as local contributions, it needs the help of the community to fund the new facility. To date, around 55 percent of the $1.1 million capital fund goal has been reached.

Through September, the facility is paying interest only on a construction loan by Bank of the Ozarks. In October, they will begin making mortgage payments on the balance.

Reagan hopes current donors will consider increasing their donations, and those who aren’t currently supporting the facility will consider taking it under their wing. There are ways to donate, including sponsoring a door, holding a luncheon or other gathering, or cash donations, among others.

“Everyone in the community should advocate for the Dragonfly House,” Cox said. “What better investment for any of us than investing in the children?”