House of Raeford standing with employees 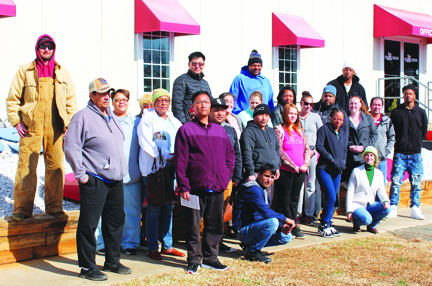 House of Raeford Mocksville employees are being paid while the plant is rebuilt after a fire.

There is an old phrase that says, “When life hands you lemons, make lemonade.”

House of Raeford Farms in Mocksville is doing just that after the central portion of the chicken processing plant off Eaton Road was heavily damaged by a fire on Dec. 14.

While investigators and insurance adjusters have investigated the cause of the fire and determined the extent of the damage, House of Raeford has maintained its commitment to its 150 employees by continuing to pay their normal wage until further notice.

House of Raeford, a family-owned company, made that same commitment to its employees last February when the Wallace, NC plant burned to the ground. Over about a two-and-a-half month period, employees were paid their regular wages until they could be relocated to the company’s Rose Hill plant or decided to leave for other opportunities. The Wallace location is scheduled to reopen this summer.

“Bob Johnson, the CEO of House of Raeford, often says: “The company and the buildings are just brick and mortar but what really makes this company are the people.”

“Nothing could be truer today, and we appreciate the patience of our employees as we work to provide some settlement to their unexpected situation,” said Dave Witter, manager of corporate sustainability and communications.

Such a commitment to employees is a rarity in the business world, and the Mocksville employees at do not take it for granted.

“I genuinely appreciate the effort House of Raeford is making to show its employees that they are valued members of a team by continuing to pay all of our salaries even while the plant is not operational,” said Angela Delk, quality supervisor. “I know for a fact that some of the bigger companies would have sent people home with nothing but a shallow promise to rehire once the plant is reopened. I think this is one of the benefits of working for a family-owned business and I am very grateful.”

“House of Raeford has been amazing in paying us while the plant is down,” said Roxana Norris, team lead.

Latia Melton, a machine operator, agreed, saying “House of Raeford has been amazing to us and has shown how much they care for us. We are a family here at the chicken plant.”

Micah Harris, a machine operator, added, “House of Raeford is what a work family is about.”

“You hate for something tragic to happen in order for everyone to realize what a great company you work for, but it’s times like these that show you how a company really feels about you and that you are important,” said Bobbi Krieger, human resources manager. “I think all of our employees understand that they are very valued.”

The company’s mission, “To do the right thing in all things that we do” is also evident in its effort to offer employees multiple opportunities to expand their skills and improve their lives while the plant is rebuilt. According to Bobbi Krieger, human resources manager, employees have many options.

Travis Hoeben, the plant’s chaplain, will be teaching Dave Ramsey’s Financial Peace University to interested employees. Employed by House of Raeford through a partnership with the Corporate Chaplains of America program, he also assists employees with personal, work-related, family, or financial issues and can be called anytime, day or night, in a crisis.

Lisa Kraft, a representative of The College of Davidson and Davie Counties, attended an employee meeting to share information about GED and ESL classes, Career Readiness Certification, and continuing education and college classes.

The company will also be conducting in-house training and team building exercises.

Krieger reached out to the Winston-Salem chapter of the Society of Human Resource Managers (SHRM) for added support. They put her in touch with Holly McDaniel of The Resource, which is assisting employees who are interested in temporary jobs while the plant is closed, and Goodwill Industries which will be offering outplacement services.

“In addition to wages, we have provided the resources and training opportunities, and it will be up to our employees to take advantage of them,” said Krieger, adding that sign-ups have been good.

Terry Bralley, president of Davie County Economic Development, has been impressed with the steps House of Raeford has taken to care for its employees and appreciates its presence in Davie County.

“I think House of Raeford stands as a shining example of humanity, with a reputable character for a company and employer – the kind of right stuff this community is made of and delivers on,” he said.

“Our employees are our family, and we don’t want to let our family down,” said Marty Gautreau, general manager. “We want to take care of our folks as if they were part of our family. We have to continue to rebuild the operation. We don’t have an exact timeline, but we are going to be back in business and processing chicken hopefully in the very near future.”

The plant has begun demolition of the damaged portion and will reopen as quickly as possible.

“I have worked for House of Raeford for many years and in many different plants. This company means a lot to me and I believe in us,” said Stephen Mixon, operations manager. “I truly have been blessed to be a part of their management team all these years. We are going to rebuild and build stronger.”

Krieger added, “Once you weather something like this together, you become a very tight group. It’s going to be good when we reopen.”

House of Raeford Farms, Inc. is one of the nation’s 10 largest chicken processors, providing ready-to-cook and further processed chicken products to the foodservice, retail, and export markets. The company is family-owned and operated and based out of Rose Hill, with additional facilities in Georgia, Louisiana, North Carolina, and South Carolina.

FLOCK is the company’s non-profit arm that aims to help people in the communities in which House of Raeford operates through youth development, hunger relief, and other programs. Last year FLOCK donated more than $1.1 million and approximately 212,000 pounds of chicken to people in need across the Southeastern United States.