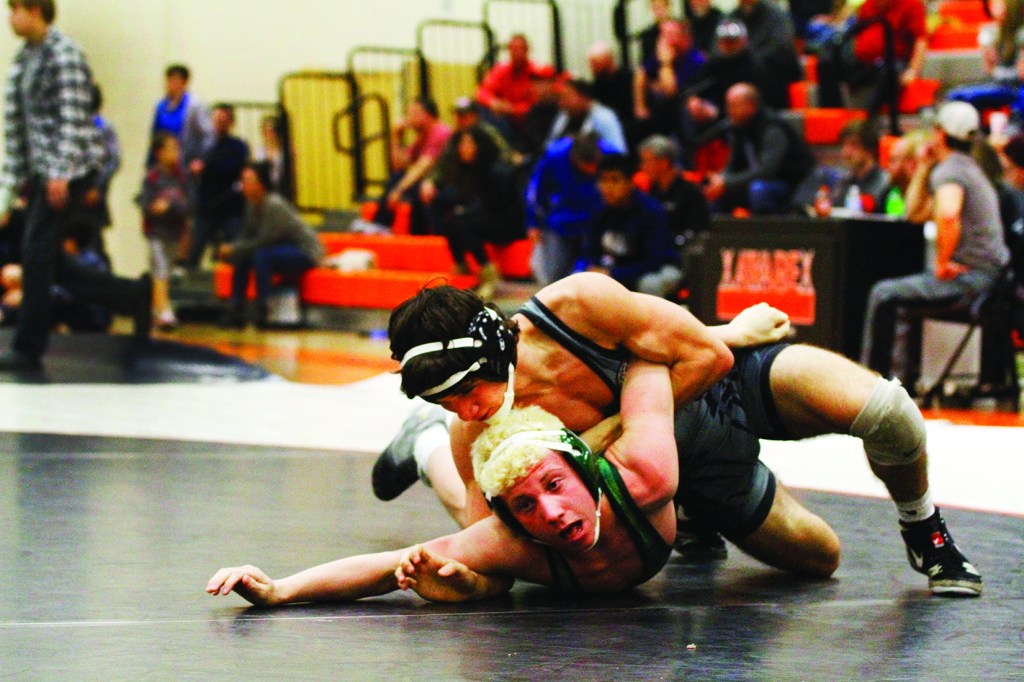 Junior Josh Chaffin rolled up a 14-2 major decision to extend Davie’s lead over West Forsyth to 30-10. - Photos by Mark and Tammy Floyd

Davie’s wrestling team was so close to clinching a win over West Forsyth and advancing to the Western Regional final. In the regional semifinals against the Titans, the War Eagles led 30-10 with four weight classes to go. They had built leads of 17-0 and 26-7. When it was 30-10, they only needed to avoid two pins down the stretch.

The War Eagles will spend days if not months wondering how this one got away. The cold truth is that West snatched it from them with three pins and a major decision at 138, 145, 152 and 160.

“We thought we were going to have enough (points) at that point and just stay off our back,” Davie coach Buddy Lowery said.

Davie defeated Myers Park and Hough in the first two rounds of the 4-A state dual team playoffs. Davie hosted the four-team meet on Jan. 30.

Strickland’s pin ignited a 37-3 run. When Nick Gillis received a forfeit at 120 to give Davie a 43-24 lead, it had won seven of eight. With the outcome decided, Davie forfeited at 126.

Later in the night in the second round against Hough, Davie endured another bumpy start before winning 33-31.

When Davie and West Forsyth met in Clemmons on Jan. 3, the War Eagles took 11 of 14 weight classes and obliterated West 54-9. But former Davie assistant and first-year West coach Jason Hooker hauled a vastly different team to Davie on Feb. 1 for the state quarterfinals.

“It’s been a very tough year for wrestling in our area in general,” Hooker, who guided Ellis Middle for seven years (2007-08 through 2013-14) before serving as a Davie assistant the past three years, told the Winston-Salem Journal. “Our kids have been through a lot of adversity. They fought through and they’ve persevered.”

“It’s been really tough,” Perez told the Journal. “More internal problems than external with guys quitting on the team. They just didn’t believe in us.”

It had lined up perfectly for the War Eagles. They had the 30-10 lead. They were dreaming of a win over the Northwest Guilford-Lake Norman survivor later in the night and a trip to the state championship two days later.

West was dead (or at least it looked that way). Ah, but the stunning turn of fate down the stretch is why coaches scream that the game/match isn’t over until it’s over.

“Coming down to the last four matches, the coaches huddled us up and said: ‘You know what, we need at least three pins and one major,’” O’Neil told the Journal. “And we delivered.”

“It felt great to be apart of this team and just do what everybody said we couldn’t do with all the stuff that’s happened with our new coaches and stuff like that,” Perez told the Journal. “It felt good to finally prove all those people wrong.”

“Part of being a captain and part of being an upperclassman on the team is you’ve got to set that example for the other guys,” O’Neil told the Journal. “It’s not over til it’s over. You wrestle every second.”

Although the teams split 14 weight classes, West’s 22-0 run from 138 through 160 dealt Davie (36-4) its first loss to a 4-A team all season. West’s full-strength lineup for the rematch turned the showdown into a tossup. It was a tremendous victory for the 24-9 Titans, who have done more than anyone anticipated. This made them 6-0 since the first Davie match. Two days earlier in the second round, they upset Ragsdale 36-30 after losing to Ragsdale 34-33 in the regular season. They persevered through four straight losses, five losses in six matches and seven losses in 11 matches.

While pandemonium erupted around the West bench, shock and numbness filled the Davie side of the gym. The magnitude of the moment made it especially gut-wrenching for the War Eagles. This wasn’t their first tough loss to West. Last year they lost 31-22 at West in the Western Regional final. West went on to beat Laney for its second straight dual team title.

“They’re better than us right through the gut,” Lowery said. “It came down to the coin toss, because they were able to move Harding to heavyweight where he’s (regularly) a 220. It’s one of those things. We wrestled hard. They wrestled hard. It was a good one.”

Davie’s season will be remembered for what could have been due to injuries. Jesus Olmedo and Crayton Wise were sidelined all year. Colby Shore suffered a season-ending knee injury in January. But as a coach once said, “That’s the old ‘iffin game.”

After beating Davie, the Titans crushed Northwest Guilford in the regional final, 39-27. It carved out a 39-9 lead before forfeiting the final three matches.

Although the Titans did not achieve a three-peat – they fell short 38-32 to unbeaten Cary Saturday in the dual team final at The Fieldhouse at Greensboro Coliseum – they still enjoyed an unforgettable run.

It was an absolute barnburner. West faced a 32-23 deficit before Evan LaBella pinned at 120 to make it 32-29. Wright helped fuel the dramatic comeback with an ultimate overtime victory to tie things at 32.

“It was tough,” Hooker told the Journal. “We started where we wanted to start. We just came up short.”