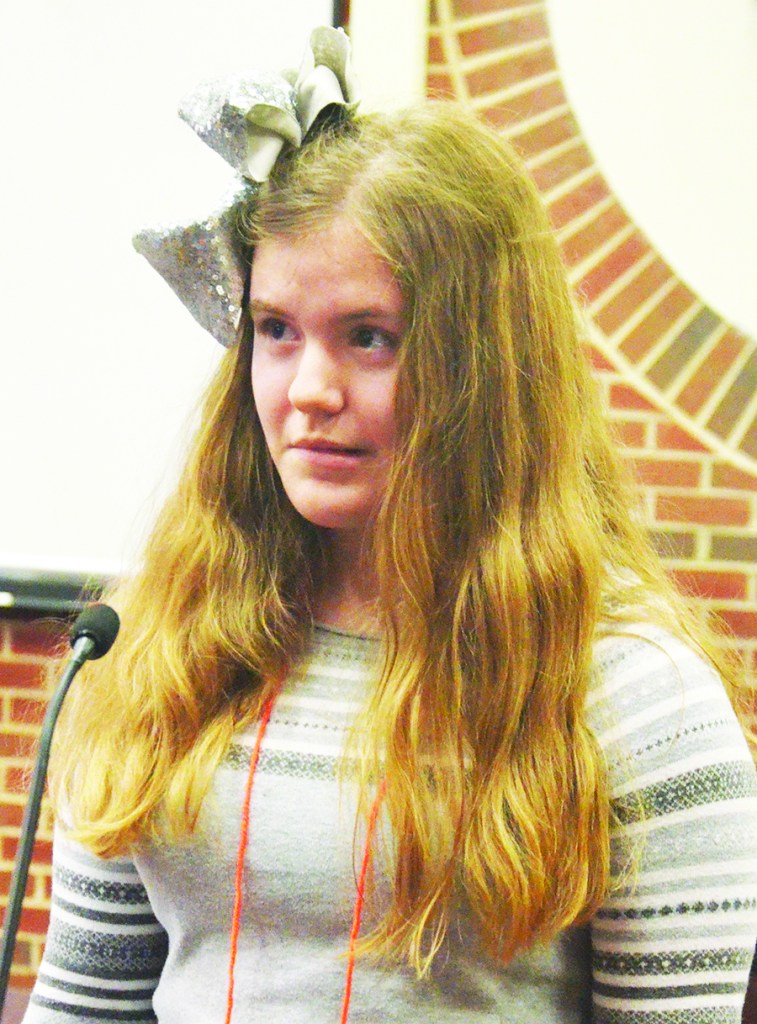 In all the years he has been facilitator for the local spelling bee, Dr. Danny Cartner has never known spellers to make it to word 73.

If they’d spelled just seven more words, an alternate list would have had to be pulled into use. But before that could happen and after a long-fought battle for first place, Reagan Edson, a seventh grader from South Davie, emerged victorious, correctly spelling “tarragon” after Amber McCullough, a seventh grader from William Ellis, missed the word “glasnost.”

It was standing room only in the school board’s room at Central Davie, as parents, siblings, teachers and others waited to see who would win the district bee and have the chance to compete in the regional spelling bee March 18 at the Milton Rhodes Center of the Arts in Winston-Salem.

Individual school winners drew numbers to determine order, and the bee began with Ada Wallace, a fourth grader from William R. Davie, who correctly spelled “timely.” In the first round, all made it through except Grace Roesch, a Cornatzer fifth grader, who misspelled “buffalo.”

Subsequent rounds saw the elimination of Wallace, Peyton Houser, Bianca Bravo, Jaden Sink and John Holcomb, until the competition was down to Max McKnight, Amber McCullough, and Edson, but when McKnight misspelled word 28, “sonata,” he and Holcomb were tied for third place.

Edson and McCullough went back and forth, spelling words that might stump even an adult: “cruller,” “tatami” and “adagio” among them, before word 54 determined the winner, Edson, and second place, McCullough.

Then began the competition to determine third place. Holcomb and McKnight had their share of misspellings, often by just one letter, and each sat down and got back up several times, before McKnight missed “wanderlust” and Holcomb correctly spelled “rupee” for the win.

While a champion and second and third places were ultimately determined, all who competed were winners, said Cartner, because as is the case with the Olympics, “you come in a champion and you leave a champion, and one is the big champion.”

Peyton Houser is the son of Ashely Houser and is in fifth grade at Cooleemee.

Grace Roesch is the daughter of Joshua and Heather Roesch.

Bianca Bravo, daughter of Norma Rodriguez, is a fifth grader at Mocksville.

Jaden Sink, daughter of Jeremy and Liz Sink, is in fifth grade at Pinebrook.

John Holcomb, a Shady Grove fifth grader, is the son of Marc and Chandra Holcomb.

Ada Wallace is the daughter of Weston and Misty Wallace.

Max McKnight, son of Mark and Marsha McKnight, is in sixth grade at North Davie.

Reagan Edson is the daughter of Mikel and Patti Edson.

Amber McCullough is the daughter of Brad and Dawn McCullough.