Boys in hunt for first 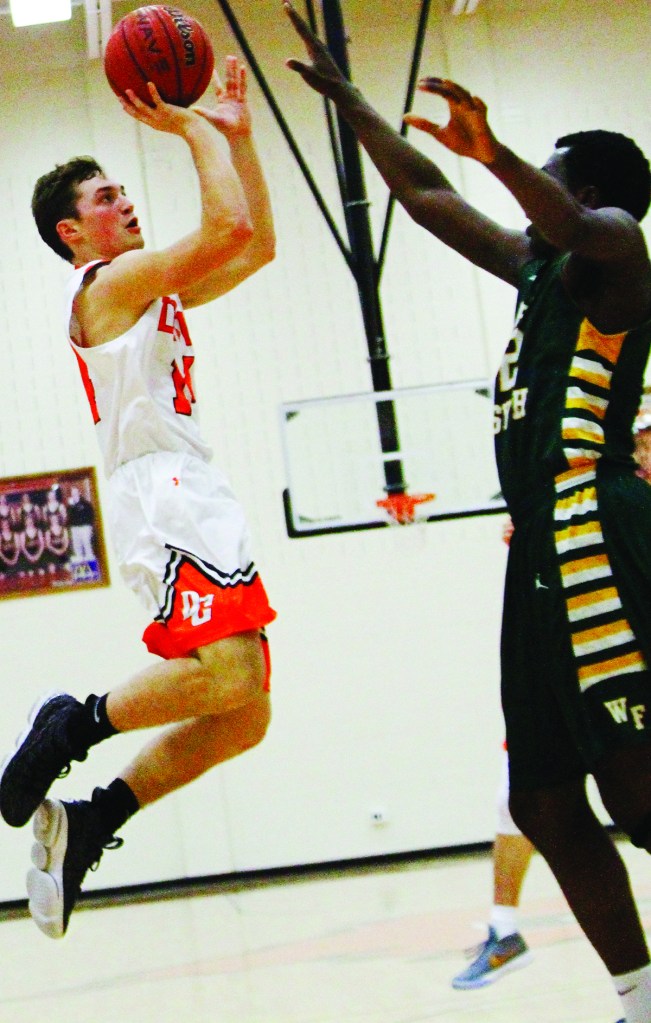 Try to ride the emotional roller coaster that coach Mike Absher and his Davie varsity boys basketball team have been on.

In a three-games-in-five-days stretch, the War Eagles squeezed past Reagan 58-53, barely lost 61-59 to Reynolds and pulled out a 64-57 win over West Forsyth. When Davie lost to East Forsyth, it tumbled to third place in the Central Piedmont Conference. When West Forsyth beat Reynolds by three, Davie was back in a tie for second – but controlling its own destiny in the bid for at least a share of the championship. Entering the week, East was 7-1 with Davie and Reynolds tied for second at 6-2. Davie hosted East Feb. 6.

Davie handled West 82-64 in Clemmons on Jan. 9 to end an eight-game losing streak to the Titans. But West had Maverick LaRue in uniform in the rematch at Davie on Jan. 29, and West was a different team with LaRue scoring 15 points.

Davie needed an impressive run in the second half to emerge with the seven-point win.

“(LaRue) is another scorer and he makes them harder to defend,” Absher said.

After jumping to a 9-2 lead, the War Eagles labored through an ugly first half. They missed 10 of their final 11 shots in the first quarter and found themselves in a 26-26 halftime tie.

When you launch 10 shots and miss seven, like Owen McCormack did for more than a half, it’s usually safe to say it’s not your night. Unless you’re McCormack, who made two big 3s in the second half. When it’s crunch time and you’re 0 for 1 on the night, like Brooks Johnson was, you’re probably not going to factor in the outcome. Unless you’re a fearless sophomore like Johnson, who made a backbreaking 3 with 2:50 remaining.

Michael Walton’s triple cut West’s lead to 39-37 and triggered a 26-13 run. McCormack hit Walton for a backdoor layup, and moments later McCormack sank an 18-footer to tie the game at 41. Troy Griggs sliced and diced his way for two, pounding the ball on the floor 11 times before converting a reverse layup over a defender to provide a 43-41 lead.

“Troy was really sick Friday (at Reynolds) and wasn’t able to practice Saturday,” Absher said. “So I thought he really showed some toughness by playing well tonight.”

McCormack’s next shot attempt came early in the fourth off a kick out from Cooper Wall. It was good as well to give Davie a 51-47 lead.

After Walton made two free throws to make it 53-49 Davie, Johnson got involved. First he found Jacob Hendrix going down the lane for a layup. Johnson had missed his only shot attempt when Wall passed to him with the score 55-52 Davie. Johnson nailed the 3 to sap the Titans.

“We’re still learning when to not shoot those, but man, those were just big shots in big situations,” Absher said. “When they let them go, we feel pretty good about them. That’s (mental) toughness because we didn’t shoot well overall. I’m really proud of our guys to dig deep and have the confidence to make those shots at key times.”

Walton paced Davie with 16 points. Although he struggled from the floor, he compensated by making 7 of 9 foul shots. That made him 20 for 23 from the line over three games. He also had to chase LaRue all night.

“That is a sign of mental toughness,” Absher said. “People don’t understand how tough that is to guard somebody like that for as long as he had to. We were fortunate to get him breaks in both halves, but not very long ones.”

“Cooper was aggressive early, which really helped us,” he said.

It was another exciting game in the up-for-grabs CPC, and a critical bounce-back victory for the War Eagles, who improved to 5-1 for their best league start through six games in 41 years. The 1976-77 team started 5-1 in the North Piedmont Conference behind senior Dwayne Grant, who was averaging 32.2 points at that point. Ron Bivins was dishing out 7.7 assists.

Last year at this time Davie was 0-6 in the CPC.

“I know it’s a cliche, but you’ve got to be ready every night,” Absher said. “I mean West (6-13, 1-5) is so much better than their record. I feel like Reagan is the same way. You’ve got to bring it every night on both ends of the floor.”

Davie’s 72-61 loss at East Forsyth on Jan. 31 is not a game that’s going on the season highlight reel.

Like Absher has implied many times, it’s an unforgiving league. Davie dug a 17-6 hole in the first quarter. It caught fire in the second quarter, using a 27-14 spree to take a 33-31 halftime lead. East (15-5, 6-1), though, dominated the second half to move into a first-place tie with Reynolds. Davie dropped to third.

Wall, McCormack and Griggs stirred the big second-quarter rally, but fouls ultimately caught up to Davie. Walton and Wall fouled out and McCormack and Hendrix ended the game with four personals each. East capitalized at the foul line, going 23 of 28 to outscore Davie by 10 from the charity stripe.

“We didn’t play our best, but they’re obviously really good,” Absher said. “We got down early, but in the second quarter we played unreal.”

But the game began to slip away when McCormack picked up his third and fourth fouls in the first two minutes of the third. He sat for eight minutes and Davie never mounted a serious run.

“That really hurt us offensively,” he said. “We got out of sync.”

Griggs led with a season-high 12. Hendrix (four 3-pointers) also had 12. Wall had 10, Johnson nine and Walton and McCormack eight each. Elijah Wood had two. It was Walton’s season low after recording double figures in the first 19 games.

“We’ve got to keep competing,” Absher said. “We’ve got to take care of ourselves and hopefully get some help in the last week. I think West Forsyth can beat anybody. Reagan had Reynolds on the ropes the other night and lost by three.”

Absher was spot on. West’s win over Reynolds provided help that Davie desperately needed, Davie took care of business in a 65-54 win at Glenn on Feb. 2, and Davie was back in contention for first place.

The War Eagles, who beat Glenn by 29 on Jan. 12, hardly set the world on fire in Kernersville, but they got the job done. After leading 29-17 at the half, their 21-12 run in the third sealed the deal.

Walton went 9 of 12 from the line to score 19 points. (The rest of the team went 2 for 11 from the line.) McCormack and Wall had 11 each. Griggs had nine. Wilson, Johnson and Hendrix had three each. Latham Chamberlain, Wood and Broc Barnette had two apiece.