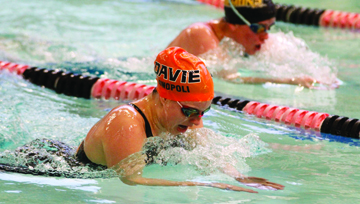 Sinopoli finished second in the 100 butterfly to make all-CPC.

In the aftermath of the Central Piedmont Conference championships at Winston-Salem State on Jan. 20, Davie senior swimmer Victoria Sinopoli basked in the glory of making all-conference for the fourth time in her career.

The top two finishers in each event made the list.

“I definitely had that pressure to qualify as an all-conference swimmer because you expect the seniors to perform better,” Sinopoli said. “So there was a lot of pressure on me to achieve my goals and also show the other teams in the conference that Davie has a well-rounded team. I was determined to get all-conference.”

While Alexander Reece of Reagan took first at 58.2, Sinopoli surged past Madison McGuinness of West Forsyth (1:02.82). Sinopoli’s 1:01.9 was a season-best time and one second off her career best.

“My goal is to definitely go under one minute,” she said. “I’ve been striving for that and I hope I’ll be getting that this year. (Reece) swims with me on my competitive year-round team, and she is very fast. It’s always a good race (against McGuinness) when we’re swimming together.”

“My sophomore year I tried lacrosse, but I found out I’m a lot better at swimming than lacrosse,” she said with a laugh.

This could have been three straight all-conference years in the butterfly, but Sinopoli did not compete in that event as a junior. She did the 200 IM and 100 backstroke instead.

The 200-yard freestyle relay team came oh so close to making all-conference, finishing third out of 12 teams. Sophomores Riley White and Mackenzie Umberger, Sinopoli and junior Hutton checked out at 1:50.76, a hair behind runner-up Reynolds (1:50.15).

“I wasn’t really disappointed or anything because I know all the girls on our relay tried our hardest,” Sinopoli said. “There’s just little things that cost us that all-conference title. I have confidence in us that we can make it to states, and I really hope we do.”

Sinopoli is a two-time state qualifier in relays. Now she wants to add an exclamation point to her terrific career by qualifying for the state as an individual.

“In the past three years I have finished ninth in the 100 fly and the top eight make it to states,” she said. “So definitely I want to make eight or up and qualify in an individual event. I need to drop one or two more seconds in order to make it.”

“Victoria is an incredible young lady,” Sizemore said. “Not only have I had the pleasure to coach her, but I also taught her during her junior year. She is goal-driven and determined to be the best student and athlete she can be. It has been a true pleasure coaching her and watching her grow. She works so hard to achieve her goals. Seeing her make all-conference was such an exciting time for all of us, and it was much deserved. I can’t wait to see how she does in regionals and hopefully states.”