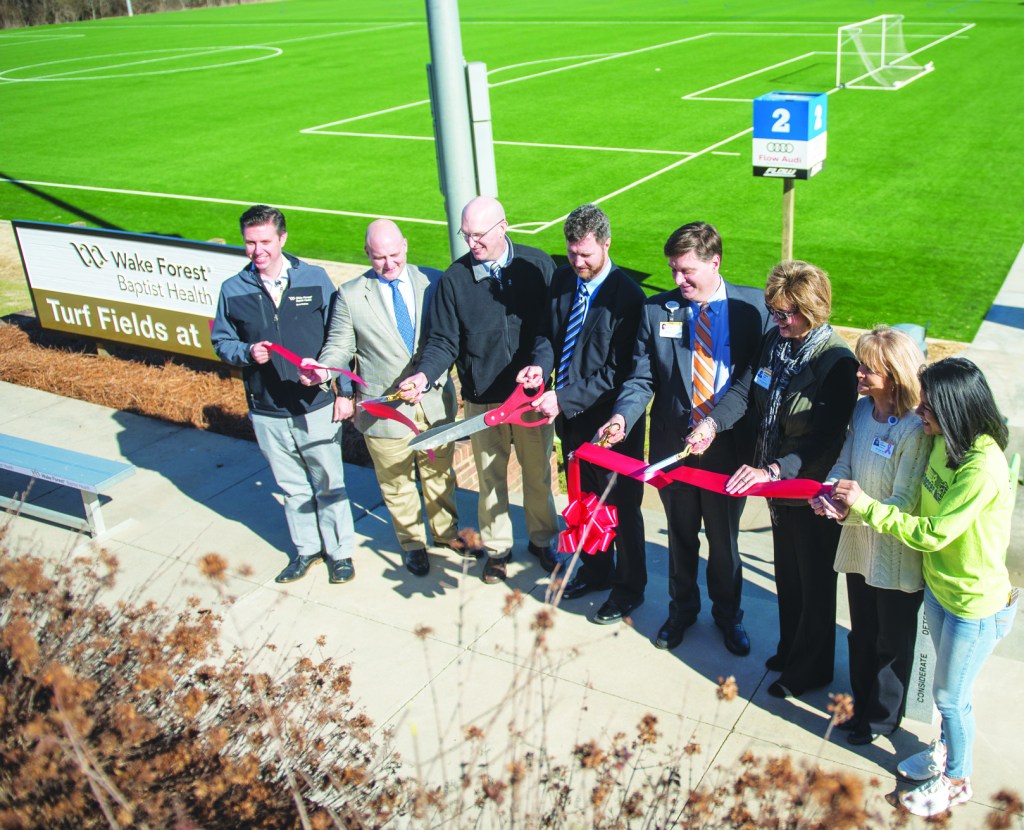 BERMUDA RUN – Right in the dead of winter, there’s a large patch of green in the middle of the fields at BB&T Sports Park.

That’s because four new artificial turf fields are now in place at the Twin City Sports Association’s sprawling complex along the banks of the Yadkin River.

TCSA held a ribbon-cutting last Wednesday when it announced a new partnership with Wake Forest Baptist Medical Center as the official naming rights sponsor of the artificial turf fields and medical provider of the youth sports organization.

“We’re here to celebrate not just these beautiful artificial turf fields but to celebrate the way this community comes together once again to make things happen,” said Scott Wollaston, executive director of TCSA, who expressed his gratitude to Wake Forest Baptist Health for being a longtime supporter and sponsor and now stepping up to help with a “bigger vision.”

“What an outstanding facility,” said Chad Brown, president of Wake Forest Baptist Health – Davie Medical Center. “We are honored and proud to be a partner with Twins.”

As part of the long-term agreement, Wake Forest Baptist is providing medical kits and CPR training for coaches and staff, along with proper nutrition, conditioning and injury prevention education to the children, teens and parents who are involved in TCSA programs.

“Youth sports offer such great benefits for those participate in them,” Brown said. “This partnership is a natural fit.”

Brown said he could recall the days of bringing his kids out to play sports.

“My kids have kind of aged out, but I can remember what the ball fields meant to my family and to the local community and not to mention the economic development,” he said. “I spent a lot of money at the ball fields.”

With Landmark Builders serving as the general contractor and partnering with Hellas Construction, which manufactured and installed the four Matrix Real M Turf fields, work was completed in 60 days – concluding on Jan. 9. Besides the turf field at Wake Forest University, these four turf fields will be the only other ones in the western Triad.

Wollaston said that the cost of the project to date is about $3.5 million, which not only includes the turf fields but also several other projects that were part of the first phase. He added that the Wake Forest Baptist Health field naming rights sponsorship represents a portion of the fundraising efforts for the entire Twins Impact “Winning Goals 2.0” campaign, but there have been many other contributors (corporate sponsorships, grants, individual donations, club investment) that also were significant in reaching the goal for this first part of the campaign.

This is the first of a four-phased project vision for the next 10 years. However, having the turf fields is a centerpiece of the overall project because of the opportunity to increase capacity and be able to host more events throughout the year.

“This is a momentous occasion and a huge part of the campaign,” Wollaston said, “but we still have plans to build out our multi-use trail systems throughout the park, build out and enhance our stadium, add another grass field and some new parking, and obviously, our collaboration with Carolina Athletic Performance.”

That’s the planned 120,000-square-foot indoor athletic space planned right next door that will feature eight full-size, indoor basketball courts that can be converted into 16 volleyball courts, along with batting cages, open space, a 4,000-square foot multi-purposed room and 10,000 square feet for a rehabilitation facility.

In addition to the turf fields, last Wednesday’s original plan also called for the unveiling of the playground.

“Unfortunately, the weather plays a part,” Wollaston said, “and it wasn’t able to get finished in time because of last week’s snow.”

A lifetime of music ministry