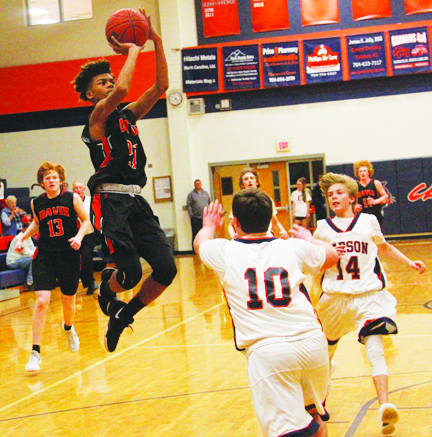 Noah Bohannon elevates for a shot. The Davie JV boys entered the week with a 12-2 record. - Photo by Mark Floyd

If someone had told Ty Woodring during preseason that his JV boys basketball team would not have a double-figure scorer in 2017-18, he would not have felt very positive about his team’s chances.

The War Eagles are averaging a modest 48 points per game, and Matt James is their leading scorer with an 8.2 average. But they haven’t just survived, they have thrived.

Last week they continued their best run in 17 years. They held off Reagan and stole one from Reynolds. They are 12-2 overall and 4-1 in the Central Piedmont Conference. That’s outstanding stuff.

They don’t have any stars. They just have a bunch of gritty, unselfish guys. And they’re deep. Zach Smith and James Reid are both averaging 7.1 points. Ben Crenshaw is scoring 6.7, Alex Ratledge 6.1, Noah Bohannon 5 and Aaron Williams 4.6. One more thing: They lock in defensively, holding opponents to 40 points per game.

“We have a bunch of guys who contribute,” Woodring said. “Bruce (Wallace) made a good point before the season. He said this probably isn’t the most athletic JV team in a while, but from top to bottom, it might be one of the deepest. They want to get everyone involved. They want to try to do what’s best for the guy beside them.”

The War Eagles, playing their first game in 13 days, carved out a 25-12 lead before watching the Raiders rally back to 25-18 by halftime. The third ended with Davie ahead 34-31.

The inside guys, Reid and Smith, pulled Davie through in the fourth. Reid scored nine of his team-high 16 in the fourth. After coming in with a six-point average, Reid scored six more than his previous high in two JV years. Smith, who contributed four during the decisive fourth, finished with 11 – his third straight game in double figures.

“James was very active on the boards,” Woodring said. “The guy that was guarding him could not stay in front of him. Six or eight points came from him catching it, facing up and then dribbling by his man. Everything is finally clicking for James.

“I feel like we’re as good as our post guys are. We’ve got depth like crazy at the guard position. James and Zach stepped up tonight. Reagan was big and tall, but we outworked them down low. James and Zach got a lot of putbacks and that was the key.”

Crenshaw (nine), Williams (six), James (four), Ratledge (four), Isaiah Cuthrell (two) and Bohannon (one) also scored for Davie, which used 20 of 34 foul shooting to gain separation. Reid and Ratledge went 8 of 12 and 4 of 4 from the line, respectively. Conversely, Reagan went 9 of 12 at the line.

Another factor: James didn’t let his cold shooting affect other elements of his game.

“Matt usually leads us in points, but he was just as pumped up and excited as everybody else,” Woodring said. “He had several big rebounds, blocks and entry passes to James and Zach.”

Davie dodged another takedown against visiting Reynolds on Jan. 26, and this one was storybook stuff.

With Davie behind by five with under a minute to play, James and Bohannon hit 3-pointers to deliver a 54-53 victory. Bohannon’s 3-ball splashed with 0:00 on the clock.

The Demons held a 53-48 lead with under a minute left. Their downfall started when they missed a point-blank layup. Then James nailed a 3 to make it 53-51 at :20. After a timeout, Reynolds missed the front end of a one-and-one and Smith snatched the rebound. Woodring called time at :07 with the ball at halfcourt.

“I drew up a play to Noah or Alex, something going towards the basket,” Woodring said. “Matt was supposed to set a back screen for Zach, and we were going to throw a lob at the rim for Zach to finish.”

Once the ball was inbounded, it didn’t take long for Woodring to realize “the whole play is busted.”

Davie improvised and Bohannon saved the day. Bohannon passed to Ratledge, who passed it back to Bohannon on the ring wing. The horn sounded with his shot in the air. It splashed, giving Davie its best CPC start in 10 years. Terry Mitchell’s 2007-08 team also started 4-1.

“It was nothing but net,” Woodring said following a fourth straight win. “Nobody really expected Noah to shoot it, but he stepped up with confidence and everybody went crazy. It was awesome.”

After hitting three 3s in the first three quarters, Davie nailed three in the fourth. Crenshaw and James hit the other two. Crenshaw came up big with seven fourth-quarter points.