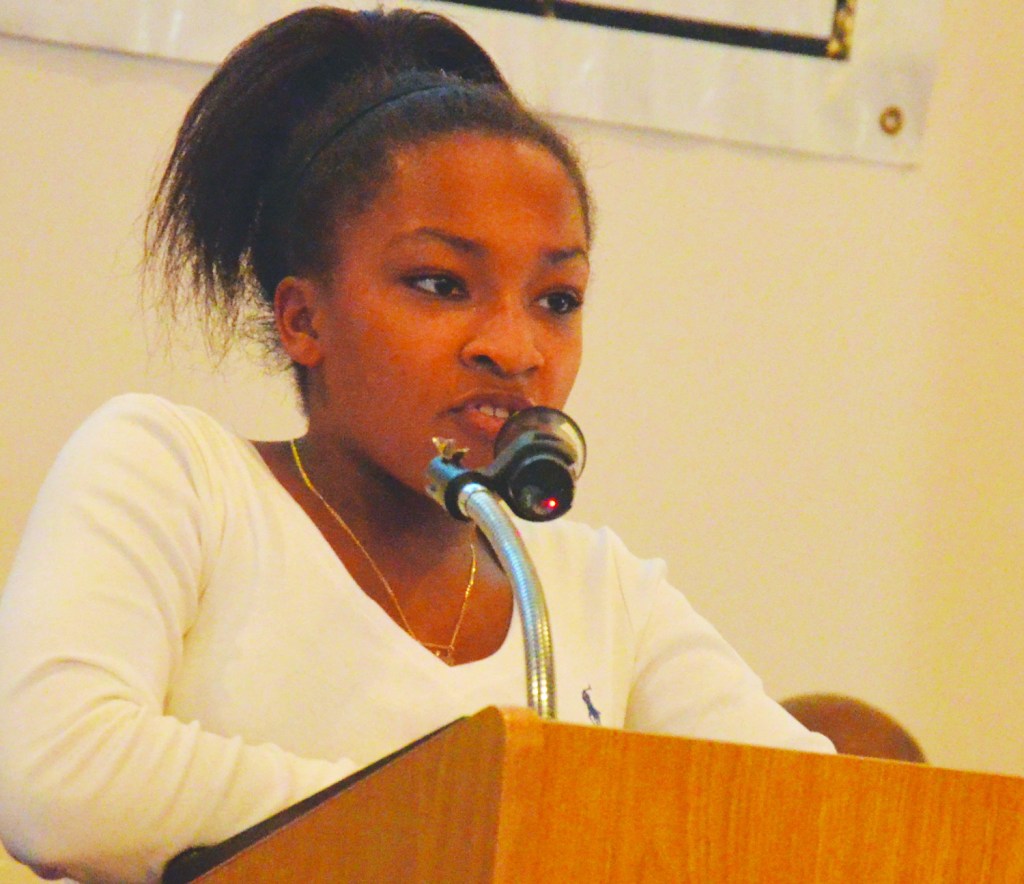 Azariah Brailsford walked up to the microphone with confidence. She spoke with that same confidence, and each time she “refused to believe,” the packed house for the annual Dr. Martin Luther King Jr. celebration let her know they refused, as well.

“I refuse to believe that peace and brotherhood are not posssible,” she said. “We should discover a new way to live in peace. The foundation is love.”

Her speech and delivery got the attention of the Rev. Dr. T. Anthony Spearman, who called the young woman back to the front as he began his keynote speech. There was only one thing missing, Spearman said. She should have held the microphone out when finished and dropped it on the floor.

The day started with a prayer at the veteran’s monument in downtown Mocksville. Participants marched down North Main Street, pausing for a dedication at the new Martin Luther King Jr. Road (formerly Campbell Road), and ending for the Davie NAACP ceremony at New Jerusalem Apostolic Church.

Spearman praised Azariah, and the first-year NAACP president said that young people would be a focus of his efforts.

“When the youth do something, celebrate them,” he said, outlining his three goals for the state organization: demand respect for their vote; inspect and reveal the root cause of poverty and racism; and protect the youth.

Spearman was 16 when Dr. King was killed, and it affected him for life. He had been working on a scrapbook of sorts of King’s life. “A part of my life was taken, too,” he said.

King was an “inconvenient hero” who history is reducing to his “Dream” speech. There was much more to the man and his accomplishments.

He listed several fairly recent instances in which African-Americans and others working for justice were wronged by society, including the clash in Charlottesville, Va. that claimed the life of a woman. “Within hours, what some of us call an American president turned a blind eye … making our country a haven for terrorists.”

He mentioned President Trump’s comments about immigrants. “Some, if not most of the people from Haiti and Africa are good people.

“It’s time to press toward a new reality. How can you dream when you’ve lived a nightmare that long (50 years since King’s assasination.)”

Spearman quoted King: “A time comes when silence is betrayal. Truth, like war, is an enemy of poverty. When I embrace King, I cannot remain silent. We must get in tune with and share his vision. King had a moral vision. Only in that kind of world can the soul of America be saved.”

He gave a history of “whiteness.” White people gave themselves power in 1680 and it has continued throughout US history.

“Shameful conditions Dr. King spoke of still plague us today … and they don’t look like they’re going anywhere. Why am I being attacked for the color of my skin? All men, I repeat all men, are created equal.” Spearman said when that is realized, “our problems would be minimized.”

“Follow in his way, the way of peace, the same way as a brown-skinned Jew. We are all tied together in a single garnet of destiny.”

Together, he said, “we will be able to move forward together and not one step back.”

The Rev. Joe Clark, president of the Davie NAACP branch, agreed. “There’s no difference between any of us. All our needs are the same.”

Bishop Rick Hayes gave a description of King’s early life until Rosa Parks decided that enough was enough. “The movement began and the movement marches on.”

Pastor Charlene Jones said that King believed that injustice anywhere was the enemy of justice everywhere. King led the march from Selma to Montgomery, Ala., helped secure the Voting Rights Act and guided generations. “What’s in our hearts is as important as what’s in our heads,” she said.

The Rev. Tamica Robinson called King an activist and a trailblazer. “He helpd re-shape America,” and Mocksville, she said, finally joined towns and communities nationwide. “Martin Luther King Jr. Road … to God be the glory,” she said.