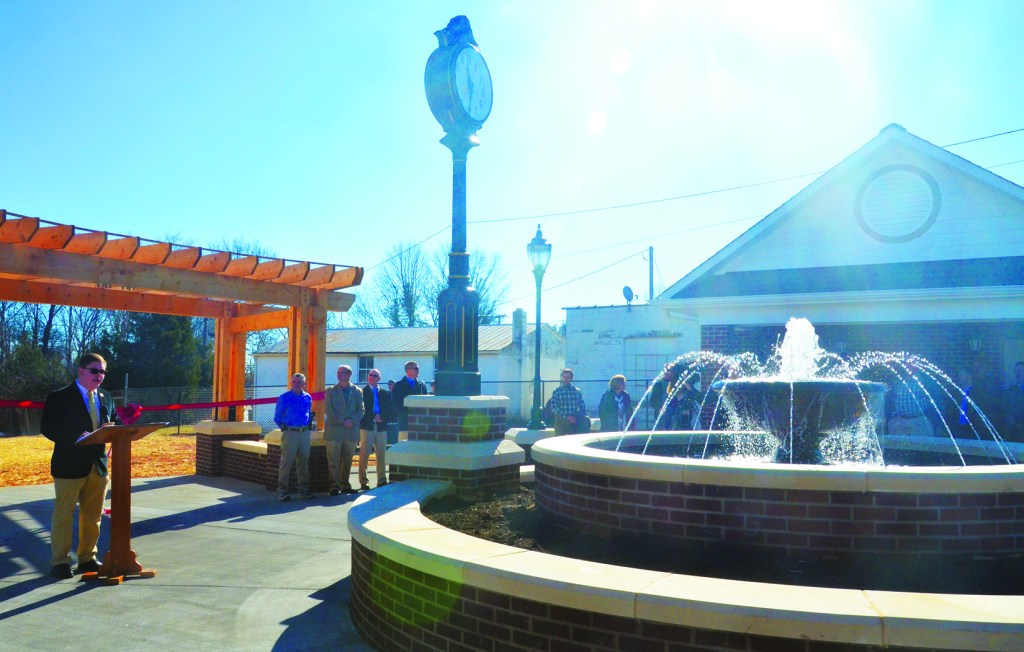 When the weather warms, the fountain will be flowing and the plants growing at Mocksville's new Main Street Park.

The water was flowing over the fountain at Mocksville’s new Main Street Park last week, as town and Rotary officals held a ribbon-cutting ceremony for the newest effort to keep downtown vital.

The park is centered by the fountain, backed by a clock provided by the Mocksville Rotary Club. There is a shelter on one side, with picnic tables, and a permanent restroom on the other side. A flag pole is at the back of the current construction.

A final phase of the park, which hasn’t been budgeted yet, will include a parking area and small amphitheater in the back.

“It is more beautiful than I could have imagined,” said Town Manager Marcus Abernethy. “It is incredibly beautiful.”

The site between the police department and the Horn building had been mentioned as a good place for a park for many years, but the ball really got rolling after former town manager, Christine Bralley, obtained a N.C. Department of Commerce grant to help fund the bathrooms.

Acting on a vision set by the town board, Abernethy said the park is one of many improvements to downtown, including new trees, sidewalks, water lines and traffic lights.

“This is creating a gem of a downtown,” Abernethy said. “A community’s character is determined by its downtown.”

Industries, he said, look for communities where workers would want to live, and downtowns play a vital role in that. “Let this park grow with us as we grow as a town.”

After a prayer by Shane Nixon, Mayor Will Marklin said Mocksville is growing in the right way, with residents opening shops and restaurants and keeping the area alive.

“There’s so many good things happening in downtown Mocksville. We want to be a part of that,” Marklin said. “It’s nice to come into Mocksville in the evening and you can’t find parking.”

State recreation officials, he said, predict the park could become a “social hub” of downtown.

George Martin, local attorney and Mocksville Rotary Club member, had always dreamed of a park in downtown Mocksville, said Rotary President Barbara Owens. His motto is that of the Rotary, “Service Above Self,” she said.

“We do things very quietly, very purposefully. Listen to the sounds of the fountain and look at the clock … and see what service above self means.”

The ceremony was closed with a benediction by the Rev. Dana Fruits.