Boys off to best league start in 44 years 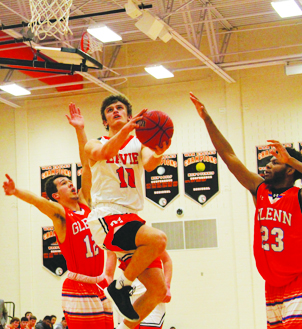 Junior Michael Walton is a powerful driver. Davie turned it on in the second half to rout Glenn.

Thanks to terrific shooting for three quarters at West Forsyth on Jan. 9, the Davie varsity boys basketball team sailed past the Titans 82-64 and found 2-0 league success for the first time since the average cost for a gallon of gas was 42 cents, Hank Aaron was chasing Babe Ruth’s home-run record and N.C. State was going 30-1 to win the NCAA basketball title.

Davie came out on fire at West, with Michael Walton and Owen McCormack teaming up for 17 points during a 24-18 first quarter. McCormack went for nine in the second quarter, giving him 17 for the half, as Davie pushed its halftime lead to 44-36.

The War Eagles resumed their insane shooting in the third as Cooper Wall’s 12-point outburst stirred the second 24-point quarter of the night. With a 68-51 lead, Davie was on pace for 91 points; it settled for 82 – the most in 18 games.

“They were in the same situation as we were. We hadn’t done anything since Friday (due to inclement weather),” Davie coach Mike Absher told the Winston-Salem Journal. “We had a little bit longer than usual walk-through today. We really got off to a great start in both halves. I think that’s a sign of some experience and some toughness. I’m just really pleased with them right now.”

McCormack lights up when he sees West’s green and yellow. He finished with 25 points, one fewer than the career high he had in a 90-84 loss to West last year. Walton (21) enjoyed his fifth 20-point game. Again he made hay at the line, going 8 of 11 to make him 17 of 21 from the charity stripe in two games. Jacob Hendrix had 16, Wall 14, Troy Griggs four and Justice Redmon two.

The War Eagles halted an eight-game losing streak in the series and beat West for the first time in five years because they sizzled from 3-point distance (12 makes) and excelled at the line (16 of 19). McCormack popped five triples. Hendrix hit four, giving him eight in two games. Wall hit two. Wall (4 for 4) also helped Davie convert 84 percent of its foul shots.

“We had a good balance of shooting and making 3s, but boy, we attacked the rim, too,” Absher told the Journal. “I thought that was awesome. We talked about keeping pressure on them by pushing the ball. We’ve got a bunch of different guys who can score, and that’s a good thing because not everybody’s going to be at their peak every night.”

“We went into the game saying no 3s for them, and they had seven in the first half,” West coach Rusty LaRue told the Journal. “We did a little better job of taking away the 3 in the second half. We’re still young.”

One day later in Welcome, the War Eagles were frowning as 62-60 losers to North Davidson. It would have been an extremely bitter defeat if North were still in the CPC, but realignment and a new school in the area have dropped the Black Knights to 2-A.

Nonetheless, Davie laid an egg against a team that is 6-7 overall and 4-5 in its conference. A wonderful opportunity to extend its winning streak to four was denied by a tiebreaking shot with nine seconds left. It was the third straight close loss to North. Last year the Black Knights won 71-70 in overtime on the night that Wall tore his ACL, and 65-63 when they deposited the game-winning shot at :04.

“They’ve just got our number for some reason,” Absher said.

Davie trailed 33-31 at the half. Walton’s 14 points were the main reason it wasn’t a significantly larger deficit.

Davie scored to tie things at 60, and North called timeout with 23 seconds left. It scored off a penetration move at :09.

“It was a tough shot, a really tough shot,” Absher said. “We actually defended him pretty well.”

Davie called time at 5.7 seconds. The inbounds pass went to Walton. North fouled on purpose because it had one to give. Now Davie was inbounding from the baseline under its basket. From 3-point land, McCormack nearly delivered a walk-off win.

“We ran a play,” Absher said. “They switched every screen. Owen read it and popped out. He had a great look at a 3 from the right wing. It went in and out. I mean it was in and popped out.”

Walton (16), McCormack (16) and Hendrix (12) scored in double figures. Wall and Brooks Johnson had six each and Griggs four. Walton, McCormack, Johnson and Hendrix connected twice each on 3s.

When Davie hosted Glenn on Jan. 12, it was a matchup between the CPC co-leader against a 1-14 lightweight. What in the wide world of sports was happening in the first half? The Bobcats jumped to a 12-7 lead in the first quarter and Davie led just 24-22 at the half.

Davie would overcome its first-half blues. It cake-walked its way to a 67-38 victory, the second-largest win of the season.

“It was three games in a week and a lot of energy spent,” Absher said. “We missed some shots that we typically make. We missed some easy shots. We played better in the last five minutes of the first half. We got it going and obviously that carried over into the second half, when we played really, really well.”

In the second half, Davie performed how everyone expected. Walton, Johnson, Hendrix and McCormack paved a 23-10 run in the third. Seven War Eagles produced points during a 20-6 tear in the fourth.

“We have experienced guys who can get it back together,” Absher said. “We’ve just got to avoid the slow starts moving forward, especially with East Forsyth (this) Friday.”

Hendrix was responsible for three of Davie’s six 3s and scored 17 points, the same as Walton. McCormack had 13, Wall eight, Johnson five and Elijah Wood three. Latham Chamberlain and Broc Barnette had two each.

At 12-4 overall, Davie has new status at 3-0 in the CPC. The last 3-0 league start also happened in 1973-74, when the late Bob Henry’s troops slipped by North Davidson 49-46. Dean Seaford was the hero off the bench, tying the game at 45 and striking again to provide a 47-45 lead. After North hit a free throw, it sent Ward to the line. He nailed both for the game’s final points. Eddie Wilkinson led with 15 points and Quarles added 12.

“We just wanted to be 3-0 in the league at the end of the week,” said a non-greedy Absher.

Davie and East Forsyth are both 3-0. They will square off Friday in Kernersville.