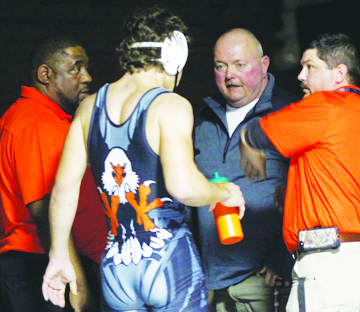 No worries. The glitter returned last week when Davie slammed West Forsyth before capturing a 13-team tournament at Dudley.

The War Eagles didn’t just beat West Forsyth – they destroyed the Titans 54-9 in Clemmons on Jan. 3.

This was prototypical of the old days, not recent history. There was a time when Davie was 22-0 against West. The Titans finally beat Davie in 2006-07, the series was 9-6 in Davie’s favor over the previous 11 years and West had taken the past three showdowns. Last year the Titans won two mammoth meetings (28-22 in the regular season and 31-22 in the state semifinals) on the way to a second straight state championship and an epic 103-match winning streak.

“They had a bunch hurt and they had a couple with the flu,” Davie coach Buddy Lowery said. “I’m just glad to get out of there with a win and try to make it to the next one.”

“Anthony takes 10,000 steps (before a match),” Lowery said. “I call him over there and say: ‘Anthony, you know you’re going to have a forfeit.’ He said: ‘They might change something up here. They might try to bump up.’ That’s fine, though.”

The War Eagles owned all five pins and improved to 31-3 overall and 2-0 in the Central Piedmont Conference. They finished second in the league the past two years and three of the last four, coming in behind Parkland in 2014 and behind West in ‘16 and ‘17. But barring a collapse of huge proportions, nobody in the CPC is going to deny Davie this winter.

Lowery, though, will not let his boys put the cart before the horse. “We did some things wrong. That’s why we’ve got practice today,” he said.

Since winning its third and last state championship in 2005-06, the War Eagles got stuck on being good – often times very good – but never good enough. But they are starting to look like an elite team this time around.

With 13 represented at Dudley on Jan. 6, Davie won the Quentin Crosby Invitational. It was a solid accomplishment with Southeast Guilford and Southwest Guilford – a pair of 3-A schools – among the field.

Davie tallied 238.5 points to SE Guilford’s 228.5, outlasting the Falcons in a classic finish. SW Guilford was third at 160. West Forsyth, the only other CPC participant in the event, was 11th at 51.

SW Guilford produced four champions, but they didn’t have as deep a reservoir of talent as Davie and SE Guilford.

This was Davie’s second individual tournament of the season; it finished 10th out of 30 in the Southern Slam on Dec. 1-2.

“Everybody says Southeast Guilford can win the state in 3-A, and those suckers are good,” Lowery said. “They won the 4-A (individual state) last year. If we wrestled them in a dual match, it would probably be a good match. Somebody would probably have a heart attack.

“Southwest Guilford is good, too, but we pecked along and did well. My wife (Tara) asked me: ‘Are y’all going to win this thing?’ I said: ‘I doubt it.’ Because I knew Southeast and Southwest were good. I guess we’re pretty good.”

It was just more of the same for Olmedo, who went 3-0 at 220 with pins in his first two matches. He also came through under pressure, pulling out a 3-2 decision in the finals over SE Guilford’s Levi West. That was a showdown that decided first and second in the team scoring. Olmedo is 39-2 with a 30-match winning streak.

“(Hunter) doesn’t have to worry about his weight and he has fun,” Lowery said.

Taylor (106) and Peyton Sherrill (145) finished second with 3-1 and 2-1 showings, respectively. Sherrill’s wins by pin and decision were crucial. Taylor has come out of nowhere after going 0-1 in varsity matches as a sophomore. He is 26-5 this year.

“We got it on in the consolations,” Lowery said. “Gillis is super quick. He misses some stuff, but there’s not many people in that weight class that is as strong as he is. Chaffin’s beat some good people (this season). Sales wrestled like he had a purpose (last week). He got after it. He had good transitions from one thing to another. Flores doesn’t have as much experience as everybody else as far as middle school, going to Combat and things like that. That’s a pleasant surprise. King is wrestling smart. He’s a pleasant surprise.”

Bill Trader took fourth at 126 by splitting four matches. The only two War Eagles who didn’t finish among the top four went out early with injuries. C. Shore suffered a twisted knee in his second match. Myers fell hard on his shoulder in his second match.

“Knowing Joseph, he’ll be there Monday (at practice),” Lowery said. “Joseph will run a cradle til the cows come home, about like Justin Jenne used to do.”