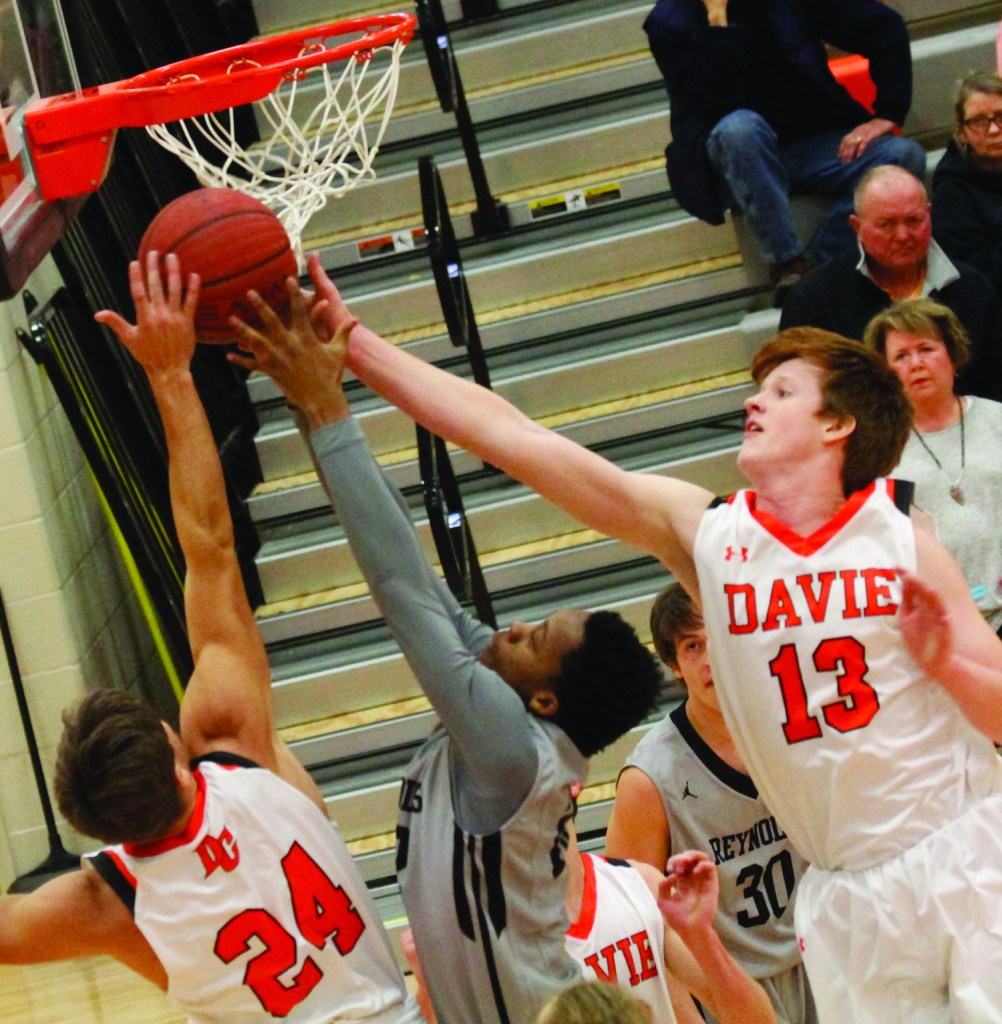 Davie’s varsity boys basketball team, which hasn’t made the top step in the regular-season standings since 1970, made a statement in the Central Piedmont Conference opener against visiting Reynolds on Jan. 5.

The War Eagles (10-3 overall) hit clutch shot after clutch shot in the fourth quarter and repelled the Demons 62-50.

They started 0-1 in the league each of the past four years. With the 2018 regular-season crown totally up for grabs, this was the kind of start coach Mike Absher was looking for.

“You don’t want to lose at home in the first CPC game,” Absher said. “We knew it was going to be a battle. There’s not a freebie in this league. We’re a bunch of juniors. We’ve got experience, but from a confidence factor, this was important.”

Reynolds’ only lead was 2-0 after the Demons (8-5 overall) won three in a row to capture the Frank Spencer Pepsi Bracket during the holidays.

“I think we were just ready for them,” junior Jacob Hendrix, who scored 18 team-high points, told the Winston-Salem Journal. “We ran their defenses (in practice). We wanted this game.”

Davie dug Reynolds into a 17-9 hole in the first half. Owen McCormack, Cooper Wall and Hendrix provided the offense during the strong start.

But the Demons hung around, hung around and hung around. McCormack blocked a shot, but a Demon grabbed the deflection and scored inside to tie the score at 36.

Davie, though, never let Reynolds get in front, with Wall’s free throw restoring a 37-36 lead. Moments later, Michael Walton and McCormack executed the most exciting play of the night. Inbounding from in front of the Davie bench, Walton passed to McCormack, who immediately gave it right back to Walton. Then Walton performed a flying one-handed dunk for a 39-36 lead.

Over the first three years of Wall’s varsity career, he passed plenty but a lot of his shots were 3-pointers. He has rebuilt his game around drives into the lane and mid-range jumpers. Following an Absher timeout, he took an inbounds pass and drove to the hoop for two, giving Davie a 46-43 lead.

Caden Davis buried a game-tying 3 for Reynolds, and then Davie airballed a 3. Reynolds grabbed an offensive rebound with a chance to take the lead, but McCormack ripped the ball away. That set up the next foray into the lane for Wall, who pump faked, spun and kissed it off the glass for a 48-46 lead.

“I was about to call something,” Absher said. “Then I was like: ‘He needs to attack the rim right now.’”

What an all-around effort by Wall (16 points, eight rebounds, six assists). He converted 5 of 7 field goals while attempting just one 3-point shot.

“We drove the ball at the right times,” Absher said. “As a whole, we’ve talked about not settling for so many 3s because there’s going to be nights where you’re not going to make them. You’ve got to attack or get the ball inside on a post feed. Coop has done a really, really good job of not settling.”

McCormack rebounded ferociously in the second half. After Wall gave Davie the 48-46 lead, the 6-8 junior controlled a defensive board.

“We asked him at halftime to step up,” Absher said. “We don’t beat North Rowan (in the previous game) if he doesn’t do an unbelievable job on the defensive glass. And he was huge tonight. That’s toughness. It’s not glamorous. When they miss, you’ve got to get that rebound.”

Davie received quite a shooting performance from Hendrix, who put up two fewer points than he had in the previous three games combined (20). He nailed 7 of 10 shots, including 4 of 6 3-pointers.

When McCormack sent a pass to Hendrix, the lefty sank a 3 to boost Davie’s lead to 51-46. After Tobias Johnson of Reynolds and Wall exchanged two points, McCormack snatched another big defensive board.

The ensuing Davie possession featured Hendrix, who cut inside and converted a pass from Troy Griggs. Reynolds’ Larry Borland kept Reynolds alive with an inside bucket, but Hendrix responded with the backbreaker, a 3 off a pass from Wall. That made it 58-50 with only 2:15 left.

“My teammates got me the ball and I just made shots,” Hendrix told the Journal. “Our whole team played great, and Cooper looked for me very well. And Troy with that pass, that was good. We were just hitting shots.”

Absher could exhale when Reynolds’ 3 missed and Wall squeezed the defensive board with the margin at 10.

“I knew they were a good 3-point shooting team,” Reynolds coach Billy Martin told the Journal. “I thought (Griggs) and (Wall) did a good job penetrating and kicking, and those kids knocked down shots.”

“That’s a great sign of toughness,” Absher said. “We led most of the game but couldn’t get rid of them. Our guys can execute stuff better than some teams that we’ve had in the past. We had four or five possessions that were really good – a couple off of sets and a couple from spreading the floor.”

Besides Hendrix’s 18 and Wall’s 16, Davie got 14 points from Michael Walton. Nobody can get to the line like Walton, who had a tough shooting night but compensated by hitting 9 of 10 free throws.

McCormack amassed nine points, seven rebounds, four assists, three steals and two blocks. Griggs didn’t put up an eye-popping stat line (five points, three assists, two rebounds, one steal), but he was a factor through ball handling and smart decisions. After going scoreless in four games during the course of the season, he’s averaging six points over the last three.

“A bright spot in the Carson loss was that Troy played really good,” Absher said. “He had seven points and did a lot of good things against a really good team. His stat line is not going to jump out and grab you a lot of times. He followed it up against North Rowan, (when) he made two 3s that were huge, and then it carried into tonight.”