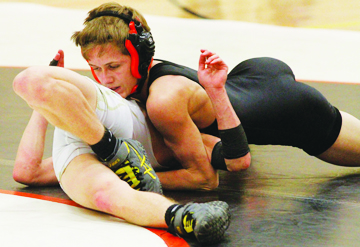 Sandwiched between a 12-matches-in-three-days stretch and a five-matches-in-one-day event was light work against Reynolds on Dec. 21.

The War Eagles entered Dec. 22’s dual tournament at West Wilkes with a 22-1 overall record, including a 22-0 mark against North Carolina competition.

After finishing as CPC runner-up the past two years, Davie is aiming for a return to the top in 2017-18. History suggests that Davie’s drought will not last long. It is 168-7-1 in the CPC in 33 years.

All but untouchable against competition within the state all season, the War Eagles’ streak of success came to a stunning halt in the Adam Benson Duals at East Burke on Dec. 29.

A 3-2 showing is not what Lowery pictured from his team going in, but Davie was ravaged by sickness, an out-of-town absence and an injury to Hunter.

C. Shore and Flores were out sick and Myers was out of town. With Flores unavailable, Davie had to forfeit four matches at heavyweight.

“I didn’t have anybody to put in there for Flores at heavyweight,” Lowery said.

Davie got good news when Hunter Strickland returned after missing significant time with an injury. But that plus would get negated.

The War Eagles steamrolled through their first three opponents (69-9 over East Rutherford, 69-0 over Maiden and 65-3 over East Burke). The win over E. Burke lifted Davie’s record to 30-1.

Davie found itself in a 39-6 hole against Foard, the Tigers flourishing from 126 through 182. Davie responded with a furious 30-6 run, but the Tigers clinched when Davie had to forfeit at heavyweight, and pins by Cody Taylor, J. Shore and Gillis went to waste.

Hunter won by disqualification when he was slammed illegally on his neck. It was a scary crash and put him in the hospital. Fortunately, it did not turn out to be serious, and he should return soon – although he will likely miss this week’s showdown at West Forsyth.

“I think the whiplash is what got him,” Lowery said. “The first thing that hit was the middle of his shoulder blades and it whipped his neck.”

Foard always has a formidable team. Davie beat Foard last year  43-27, but the Tigers have won five of six in the series.

West Lincoln pounded out a 30-0 lead by pinning everywhere from 132 to 160. Davie put together an amazing comeback, winning eight of the last nine matches. The only exception during a 35-6 run was a forfeit at heavyweight.

Davie fell just short. Lowery could take solace in this: It lost by nine and one with a patchwork lineup. “Not having a heavyweight killed us,” he said.

Taylor, J. Shore, Gillis, Trader and Olmedo went 5-0 for the day. Hunter went 4-0 before leaving. Strickland went 4-1 in his return, improving his record to 13-3. King also went 4-1. Going 3-2 were Matthew Downey, Chaffin and Tyris Griffin, a sophomore who recorded his first varsity wins while filling in at 152 for the 23-6 Myers. Austin Smith went 1-0 as Hunter’s replacement.