Boys battle to third in Moir 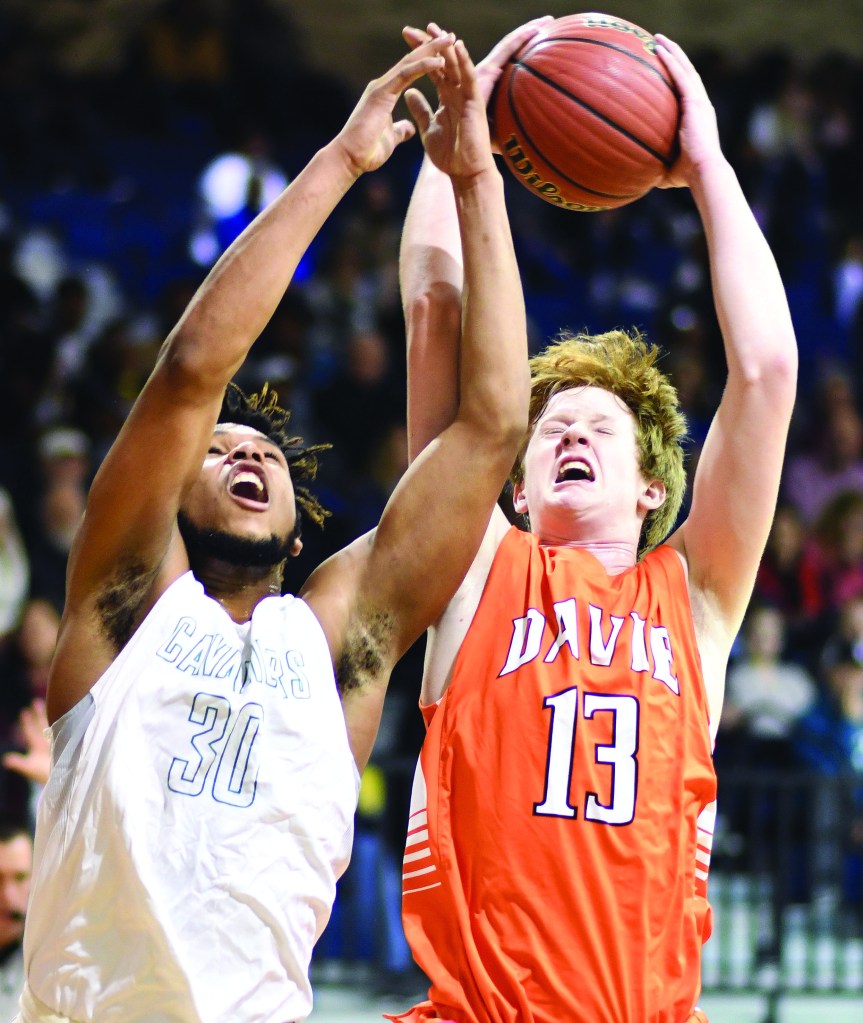 SALISBURY – It doesn’t figure that Davie’s boys basketball team would get outrebounded 52-36, including 30-10 on the offensive boards, and win the game.

It doesn’t figure that Davie would get beat 24-16 in points in the paint and 13-7 in points off turnovers and win the game.

It doesn’t figure that Davie would get beat 22-14 in second-chance points and 8-0 in fast-break points and win the game.

But when they totaled all the numbers, Davie had beaten North Rowan 53-45 in the third-place game of the Sam Moir Christmas Classic at Catawba on Dec. 30.

The third-seeded Cavaliers, who were coming off a painful overtime loss to Salisbury in the semifinals, dropped to 6-3. No. 4 Davie bounced back from a semifinal loss to Carson and improved to 9-3.

The War Eagles’ win was not pretty, but it certainly beat the alternative. They went 2-1 in the tournament to carry momentum into the Central Piedmont Conference race.

“The three games in this tournament always prepare us,” coach Mike Absher told the Salisbury Post. “And when you can win two out of three here, it gives you momentum.”

Davie jumped to a 10-4 lead in the first quarter. North fought back to take an 18-16 lead. Baskets by Troy Griggs and Owen McCormack allowed Davie to take a 21-18 lead into the break.

The Cavaliers rebounded relentlessly all game, but there was a lid on their basket most of the day. But they converted putbacks in the third to keep Davie’s lead at 38-34.

Cooper Wall and Michael Walton came through down the stretch for Davie. Wall didn’t have a great shooting game, but he found the mark when it mattered most, his slicing layup providing the biggest lead (45-36) with 4:13 to go.

It wasn’t over. North’s 7-2 run pared Davie’s advantage to 47-43 with two minutes on the clock. Walton supplied the biggest points of the game, getting free on a set play and draining a jumper for a 49-43 lead. McCormack cleaned the glass and made two free throws to finish off the Cavs, who negated all their advantages by shooting 25 percent (17 of 68) and missing nine of 16 foul shots.

McCormack produced a double-double with 15 points and 10 rebounds. Walton had 15 points and six boards. Wall had 10 points, Griggs six and Broc Barnette three. Jacob Hendrix and Brooks Johnson had two each.

It was the fewest points in a Davie victory since 2014, when the War Eagles slogged past South Rowan (46-36) in the Moir third-place game.

“We’d scouted North and knew they could rebound,” Absher said. “We knew we couldn’t let them turn this into a volleyball match, but then they went out and did it anyway. They are monsters on the glass.”