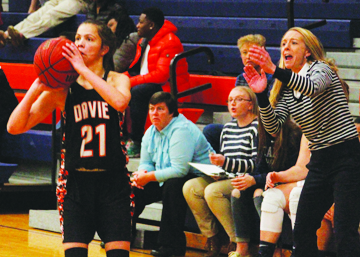 Junior Morgan Lewis attempts an outside shot at Carson. - Photo by Mark Floyd

The Davie varsity girls basketball team’s losing streak reached three at Carson on Dec. 19, but the 56-41 loss was hardly deflating.

Second-year coach Kevin Revels knows what he’s doing with this program. It was the second game in a row against formidable competition, and again Davie competed admirably. The War Eagles lost by 11 at North Iredell. The night before they visited Carson, the Cougars shot 53 percent in a 75-51 win over Central Cabarrus (5-4). When the third quarter closed in the Davie-Carson game, the War Eagles were behind by just eight. Keep in mind that N. Iredell and Carson are a combined 17-3.

The results against one common opponent – A.L. Brown – suggested Carson would mop the floor with Davie. Davie clawed past Brown 49-39 on Dec. 6. Carson ripped Brown 58-28 on Dec. 15.

“We did a really good job of being prepared to play mentally tough,” Revels said. “We got down by 18 and we never quit fighting. We changed defenses up and were able to claw back into the game. Last year we would have probably quit. Last year’s team would probably not have continued to fight. And these girls continue to fight.”

The Cougars are enjoying a fabulous season – 9-1 with an eight-game winning streak – but they met a sizzling Trinity Hayes in the first quarter. Hayes’ three 3s allowed Davie to stay within 16-14 in the first quarter. The impressive start included a triple from Morgan Lewis and a bucket from Madison Jones. Carson’s defense would put an emphasis on finding Hayes the rest of the game, and she only hit one bomb after the first.

“I don’t think they were aware of her, and they were playing zone and it was kind of soft,” Revels said. “They weren’t doing a good job of closing out on her. I don’t think they gave her many opportunities in the second half. That was an adjustment they made.”

In the second quarter, the Cougars hit their stride and mounted a 37-21 halftime advantage. But Davie (2-6) got back in the game on pure guts. Rylea Carter scored seven of Davie’s 16 points in the third, going 5 of 5 from the free-throw line. Kayana Caldwell, a recent call-up from the JV, put in five points and Hayes nailed her fourth 3 as Davie chopped the deficit to 45-37 by the end of the third.

“This was very much a half-hearted effort,” she told the Salisbury Post. “Our defensive effort was pretty much non-existent. We didn’t stay in a stance. We didn’t talk. In the first half we didn’t close down on shooters, didn’t box out and didn’t rebound very well. I think Davie played hard. They did not shut down or back down. It was just a real subpar effort on our part. We’re a lot better than we showed tonight.”

The War Eagles fizzled in the fourth, managing only four points, but the experience against a 9-1 power will help Davie in the Central Piedmont Conference.

“That’s the kind of team we want to be,” Revels said. “They don’t overwhelm you with talent or size, but they’re well coached, they play good team basketball and they don’t make a lot of mistakes. That’s where we want to get to.”

Carter had a stellar game, the sophomore hitting 11 of 13 foul shots and scoring a varsity career high 15 points. Hayes had 12. Caldwell, a sophomore, had six in her second varsity outing. Jones had four, Lewis three and Georgia Visser one.

“When we see zone, we’ve told Rylea she’s got to be willing to catch it and put it on the floor between the seams,” Revels said of his point guard. “She’s getting better and better at that. In our man offense, a great time to drive to the basket is behind a cutter, and she’s gotten really good at that.”

The feel-good story of making strides and coming away with lots of positives in the face of defeat did not last. The final game before Christmas was grim. Davie went down with barely a whimper in a 70-34 decision against visiting Statesville Christian on Dec. 21.

Coaches Revels and Tim Kenney were disheartened after Davie shot 21 percent (14 of 65). Davie tried 23 3-pointers, but only four found the bottom of the net. It was the worst loss since Jan. 27, 2017 against West Forsyth.

Yes, the unbeaten Lions (12-0) are a hugely talented team. But Revels did not expect a listless performance. This has been a brutal stretch for Davie (2-7). During its four-game slide, it has faced North Iredell (twice), Carson and Statesville Christian.