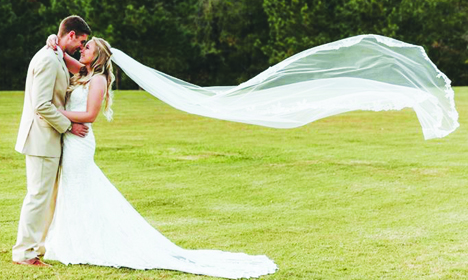 On Saturday, Oct. 21, Brooke Marie Ball said “I Do” to the love of her life, Travis Scott Albrecht in a 4 p.m. outdoor, waterfront ceremony at Camp Manna near Cooleemee.

Parents, grandparents, family and friends had witnessed their love grow since their meeting at college orientation in June of 2013.

The bride is the daughter of Brad and Janet Ball of Mocksville. The groom is the son of Scott and Jennifer Albrecht of New Hill, and Beth and Rex LaSasso of Morrisville. Their grandparents are Phil and Kathy Ball, John and Becki Helderman, Bonnie Wright, Debra Moscato, Russell Rose, Donna Albrecht, Angela and Douglas Harding, and Alice and Joe Wright. Grandparents who were memorialized were Joyce Ball, Ruth Helderman, and Richard Albrecht.

The bride and groom are graduates of East Carolina University with degrees in management information systems and mechanical engineering, respectively.  She works as a project coordinator for Optum Technology and he is a design engineer for Blue Force Technologies.

The best man was the father of the groom, Scott Albrecht, and groomsmen were Andrew Mansfield, Eric Vick, Thomas Hoppe, and Ian Maier, all college friends of the groom.

The flower girl was Samantha Albrecht, sister of the groom and the sign bearer was Audrey Helderman, cousin of the bride.

The wedding was officiated by Pastor Tim Roberts.  It was coordinated by Logan Durham and Damian Lewis provided the music for the ceremony and reception.

A cookout rehearsal dinner was held on Friday evening, Oct. 20, and was hosted by the groom’s parents.

The reception’s catered barbecue meal held after the wedding was hosted by the bride’s parents.

After a week long honeymoon in Antigua, the couple made their home in the Raleigh area.