Wrestling off to 21-1 start 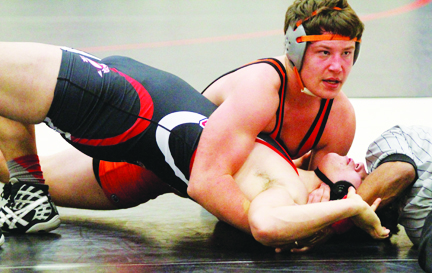 That coach Buddy Lowery’s War Eagles got to battle in playoff-type matches against Newton-Conover and Rock Hill (S.C.) – they split the matches – was a great bonus as well.

The War Eagles went 8-1 against the large field at Newton-Conover on Dec. 15-16. They’re pretty darn good with the current lineup. They will really be something if they ever get to full strength.

“There is no doubt we’re getting better,” Lowery said. “We’re a whole lot better than we were two weeks ago. I mean leaps and bounds. When you wrestle 12 times in three days, you ought to be getting better.”

The run was stopped by an opponent from South Carolina. Rock Hill pulled out squeakers at 113, 160, 180 and heavyweight to stave off Davie 42-22. Davie responded with a 45-27 win over Hunter Huss.

Gillis and Olmedo had monstrous performances, each going 9-0 over two days. Gillis racked up seven pins to go with two forfeits.

“Nick’s strong and in good condition,” Lowery said. “He’s pretty good on his feet. He moves. He’s strong for a 120-pounder. I mean he’s strong as a bull for that weight.”

Olmedo piled up eight pins in as many tries; his other win was a forfeit. He got off his back against Rock Hill and Hunter Huss and gutted out pin victories.

Lowery is dying to watch his 21-1 team at full strength. Jesus Olmedo has been sidelined all year, the heavyweight hoping to return sometime in January. At Newton-Conover, Davie was missing Bill Trader, who is 6-2 at 126 and Hunter Strickland, who is 9-2 at 170.

“I’m hoping (Trader and Strickland) can get back after Christmas,” he said. “We’re not going to be bad when we get some people back. (Being full strength) would make my life a whole lot easier.”

Taylor was the latest to suffer an injury (knee), but Lowery was glad to report that he was “walking fairly well (on Saturday).”