South wrestling off to good start 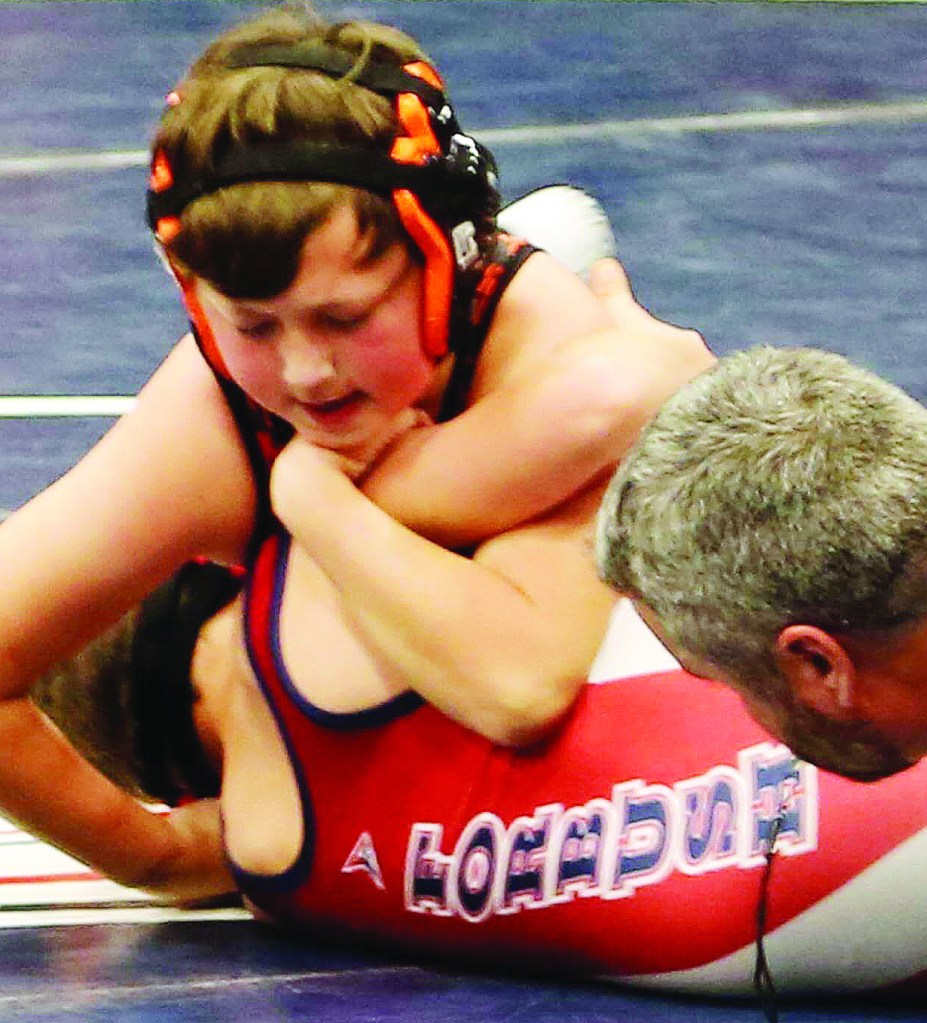 Reid Nail rules for South at 98.

South Davie’s wrestling team was everything coach Russell Hilton hoped it would be in the biggest match of the season so far – against visiting Ellis on Dec. 6.

“My first three weight classes are all sixth graders, so we’re real young starting out,” he said. “I knew we’d probably be behind (early), but we’re really good through the middle and upper weights. So I knew we’d come back.”

Dickerson came out of nowhere at 132, pinning in his season debut. He started the winter season on the hardwood, then decided to change sports.

“We just added him last week,” Hilton said. “He wrestled for us last year and then he switched over to basketball. He had only practiced for three days. We plugged him in a hole because we were missing Seth Johnson (who is 3-0 with three pins). CJ definitely helped filling in.

“Jones wrestled really well. He pinned but there were several times that (Burris) put him on his back. It was back and forth.

“Garcia had a big win. I knew if we won at 160, we had two forfeits later on, so that pretty much guaranteed it at that point.”

When the Tigers closed last season with a 51-37 win over Ellis, they halted a 13-match losing streak in the series. Now they have consecutive wins over Ellis. Although the Jags dropped to 2-2, neither loss was bad by any stretch of the imagination. West Rowan beat Ellis 66-34, and West beat North Davie 60-36.

At heavyweight, Ellis’ Dixon pinned to close the final margin to 18.

“We wrestled really well, much better than we did against Thomasville,” Hilton said. “We��re learning from our mistakes. You can definitely see improvement from last week to this week.”

Seven Tigers who have competed in three or more matches remain undefeated. The list includes Reyes, who is 5-0 with five pins. Lyerly and Jarvis are 5-0 with four pins. Davis is also 5-0. Garcia is 4-0 and Jones 3-0.

North Davie found its mojo on Nov. 17 at Forbush and it hasn’t looked back. The Wildcats (5-2) drilled Thomasville 66-29 on Dec. 5 for their fifth straight win.

“Richards is smooth and sound with technique,” Holt said. “He’s got a chance to be a good one.

“Jenkins is gritty. He loves to go out and try to pin as quick as he can. I hope he stays with it because he could help Davie as well.”

Thomasville is a common opponent for two Davie teams. While North beat Thomasville by 37, South won by 18 (60-42).