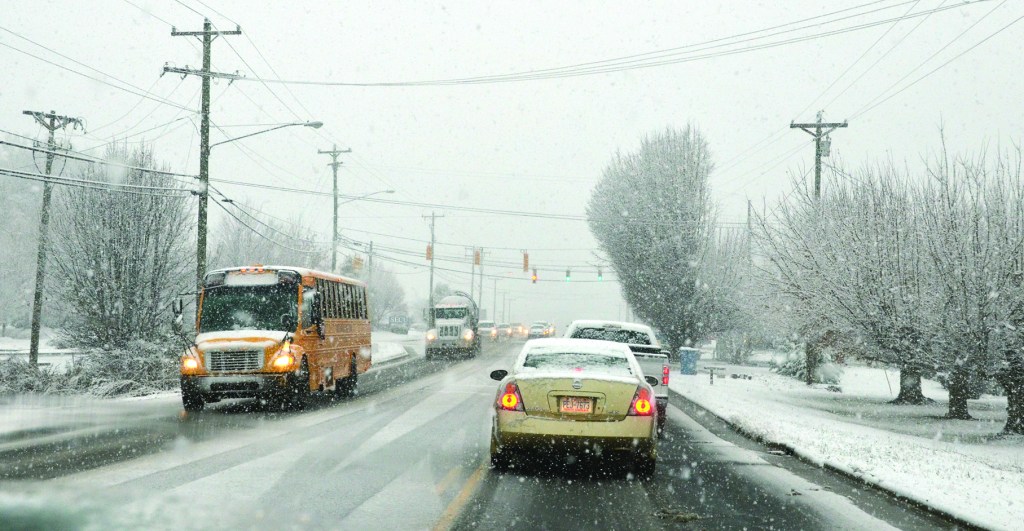 Yes, there was a forecast for snow last Friday and Saturday.

But no one predicted it would snow so quickly that it would become a traffic hazard.

That happened just after 2:30 p.m., when the heavy snow caused the temperature to dip below the freezing point.

The result: slick roads. The problem: students were just being released from school.

While dozens of minor traffic accidents were reported, there were no reports of serious injuries, said Davie Sheriff J.D. Hartman. The problem lasted for a couple of hours until the temperature went back above freezing and the snow turned to slush on the roads.

Davie Schools’ Superintendent Dr. Darrin Hartness took full responsibility for not letting students go home early. It was decided to dismiss Davie High 30 minutes early, while other schools were already in the process of dismissing.

“We should have cancelled school earlier. I apologize, and I want you to know I would never intentionally put anyone’s safety in jeopardy.”

He reported that three buses were stuck in traffic for some time, but none were involved in a wreck.

The weather also meant postponement for several holiday events scheduled over the weekend.

The annual Advance Christmas Parade was postponed until this Saturday, Dec. 16. It will start at 10 a.m., but roads around the parade route will be closed at 9:45 a.m.

Advance First Baptist will host a pancake breakfast from 8-9:30 Saturday morning, and Santa and the fire truck will be available for photos after the parade at Advance Methodist. Both are on N.C. 801.

To enter the parade, show up by 9 a.m. at Shady Grove Elementary on Cornatzer Road with a family-friendly entry.

Admission is new, unwrapped toys for Toys for Tots.

See the smoke from the steam engines, hear the engine sounds and conductor announcements. It will include modern diesels and some fantasy engines.

The Garden Valley neighborhood off Sanford Avenue in Mocksville will be lit with luminaries at dusk on Saturday, Dec. 16 and Sunday, Dec. 17, for members of the community to drive through and enjoy the decorations.

Downtown Mocksville will continue its Christmas celebration with horse and buggy rides from 6:30-8:30 p.m. on Wednesday, Dec. 20. Cost: $5 per person, with children under age 6 riding for free.

Ride through downtown, enjoying the lights lining the buildings.