Elf Jr. on stage this week 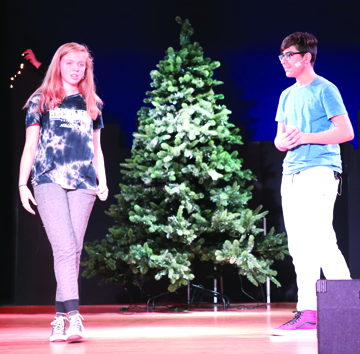 If there’s one thing the cast and crew of William Ellis Middle School’s upcoming production of Elf Jr. can agree upon, it’s that everyone needs to come see the show. It’s a great story that both kids and adults can relate to, said Brenda Mosko, musical director. It brings everyone into the spirit of Christmas.

Following the storyline from the popular 2003 movie “Elf” starring Will Farrell, the musical inspires hope, joy and the true meaning of Christmas. It’s also likely to tickle every funny bone in the audience.

Christmas started a little early for the William Ellis Middle School Musical Theatre program as they prepared this semester for “Elf The Musical Jr.” Rehearsals for the production began in mid-September with 32 cast members. The show includes most of the beloved and highly-quoted lines from the movie “Elf” such as when Buddy (Daniel Rodriguez) reminds his new friend Jovie (Sara Bishop) that “the best way to spread Christmas Cheer is singing loud for all to hear.”

When the curtains open, there is a glitch on Santa’s production line – Buddy’s lack of toy making ability – reveals that he wasn’t actually born an elf. When Santa tells him the truth about his origins, he sets off to find his birth father in New York City.

In New York City, Buddy learns that not everyone is as enthusiastic about the holiday season as his adoptive North Pole family. To his disappointment, his birth father, Walter Hobbs (Luke McCormick), isn’t ready to accept Buddy a 6-foot-tall exuberant elf as his long lost son.

As the story unfolds, Buddy’s irrepressible optimism and over-the-top love for Santa and the Christmas season begins to break down the walls erected by Walter and Jovie. Working on Macy’s Christmas display, Buddy spreads a little “Sparklejollytwinklejingley”—not just on the store’s Santa’s Toyland, but in the hearts of everyone around him.

Walter has a get-your-work-done attitude, but he has a character shift throughout the play and learns that a son is a good thing to have. Buddy comes in and shakes things up. Elf Jr. teaches a lesson that anyone can learn, no matter their age.

Director Penny M. Endicott and Mosko selected Elf Jr. because of the sheer fun. “We were looking for something we’d never done before, something that would bring a little holiday cheer to our students and community,” Endicott said. “We love the movie and the message, we thought it would be a really great show for this cast.”

Of course, no Christmas production would be complete without the appearance of the man, himself – Kris Kringle.

Robbie Greene, who plays Santa Claus, said the role of the jolly old elf is tailor-made for his personality. He said he “loves everything about appearing in stage productions, including the thrill one gets from performing.”

“I tie everything together so that everyone starts to believe,” said Greene. “And I love playing Santa.”

And even though Greene will take off the red suit when the curtains close on Elf Jr., he has a secret he wants to share with the audiences.